Knowledge Base Cloud Computing What is Serverless?

What Is Serverless Computing?

Serverless computing has been dominating the headlines, tech shows, and industry conferences. Even though the idea of ‘serverless’ has been around since 2006, it is a relatively new concept. A lot of people seem to believe that serverless is the natural evolution of computing model. In this article, we will explore key concepts of serverless computing and introduce a solution from Alibaba Cloud called Function Compute, an event-driven and fully-managed compute service.

Over the last few decades, Enterprise IT has evolved at a rapid pace, from physical servers, to virtual machines and to containerization technology.
The first generation of computing was based on Von Neumann architecture and employed fixed programs. These programs were usually tightly coupled with the hardware they ran on. As we transitioned to disk-based storage, the operating system became less dependent on the hardware it ran on. However, software applications came to resemble like a "monolith" in which the user interface and data access code were combined into a single program running on one platform. These monoliths were self-contained and any changes needed to the functionality required a huge undertaking. While the operating systems became less dependent on the hardware they ran on, the applications themselves became more dependent on the specific operating system. In early 2000s, if we had to launch a new application, we probably had to plan purchase of a new server first. So in summary, the physical server were the building block of an application.
Then in 2001, virtualization technology started to gain traction as the hardware became commoditized (especially x86 based architecture) and made virtual machines very popular. Hypervisor software, made popular by companies such as VMWare, made it easy to create virtual machines. By running many virtual machines on one physical device, the need to buy physical servers became less and the architectural building block shifted from a physical server to a virtual machine.
While virtualization made it easy to operate machines, virtual disk images were rather large and clumsy, and were not easy to scale as required by the volatile computing workload. Container technology enabled operating system level virtualization and proved to be a much more lightweight alternative instead. Along the way, we saw several other major developments. We ae going to mention some of the key ones. 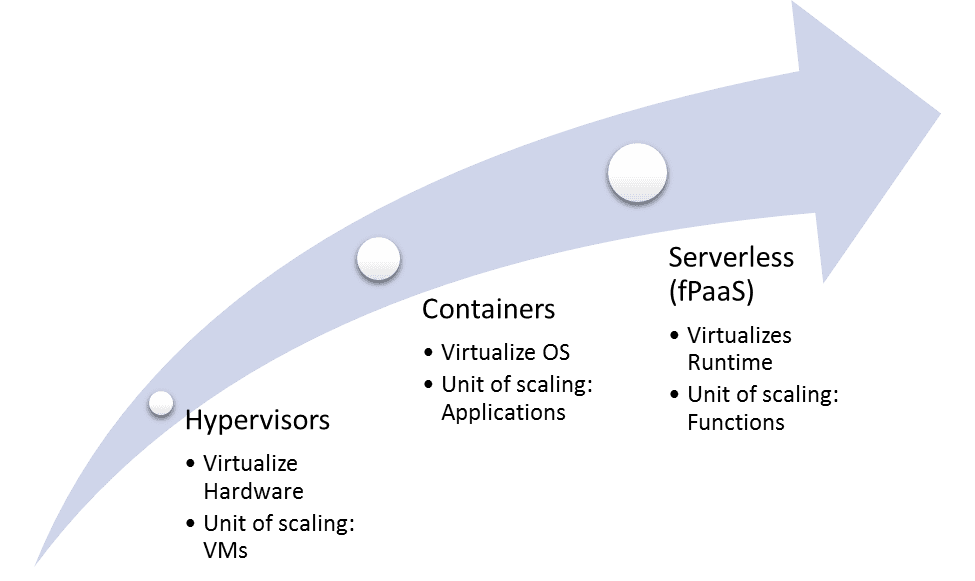 In summary, the containerization technology made it easy to build and deploy microservices based architecture, enabling further loose coupling and much greater scalability.
Serverless computing is the natural evolution of the computing model, as we explore these concepts in further detail.

Many challenges still remain, even with the use of container technology. Some of these include:
Some of these challenges can be addressed by many open source and proprietary solutions, however, they still require resource commitment and are not trivial to execute, especially by small and medium sized businesses.
Let’s explore how serverless computing can alleviate some of these challenges.

Serverless architecture, also referred to as FaaS (Functions as a Service) or Backend As A Service, enables the execution of an application via ephemeral and stateless containers; The containers are created right at the moment an event occurs and triggers a need for an action. Thus, it is event driven. Applications, bundled as one or more functions, are uploaded to a platform and then executed, scaled, and billed in response to the exact demand needed at the moment. Serverless does not mean “without a server.” Rather, infrastructure orchestration details are hidden from the user and managed by the serverless platform provider. 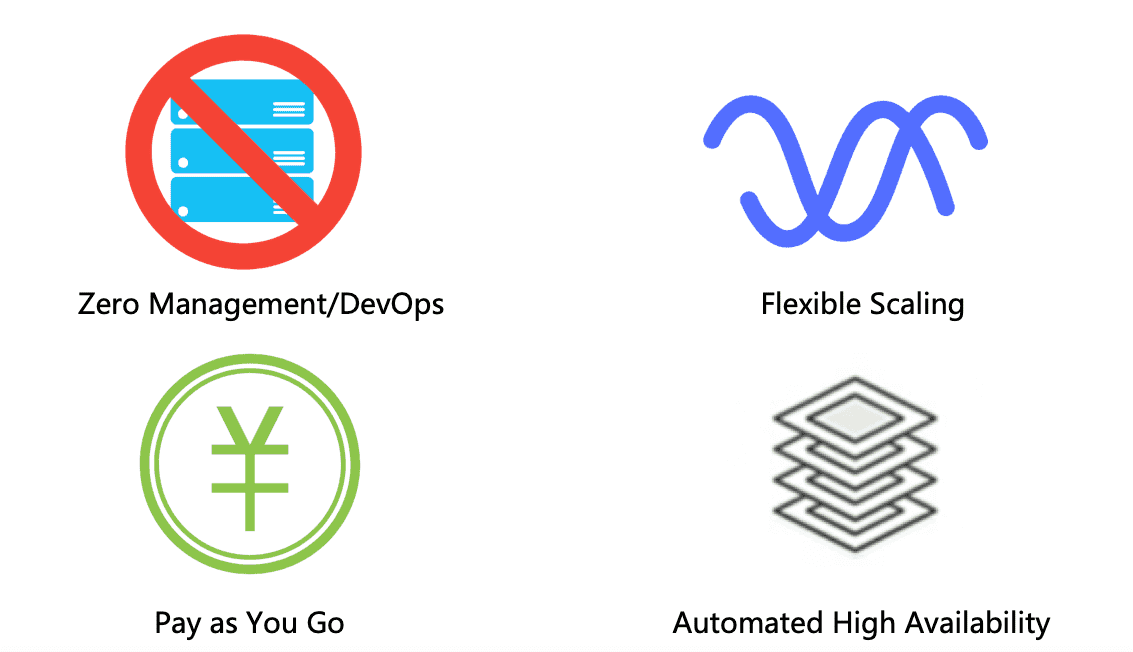 Some of key features of serverless technology include:
The serverless community is growing very fast and we see many web, mobile, and data processing backends that are being built using serverless components. Common use cases that fundamentally leverage serverless approaches include chat bots, BigData computing, machine learning, and internet of things (IoT).

Alibaba offers all the tools that are needed by the developers in order to start their serverless journey. Function Compute, a core serverless computing product offered by Alibaba Cloud, can dramatically enhance agility and lower operating costs for companies of all sizes, enabling them to better concentrate their investments on business-critical deliverables and outcomes. Besides Functional Compute, many other cloud products, including storage, analytics and messaging are serverless. For example, Object Storage Service (OSS), the first cloud service launched by Alibaba Cloud, is a serverless storage service. Users do not need to care how data is stored on the underlying server, and they only pay for storage resources consumed. 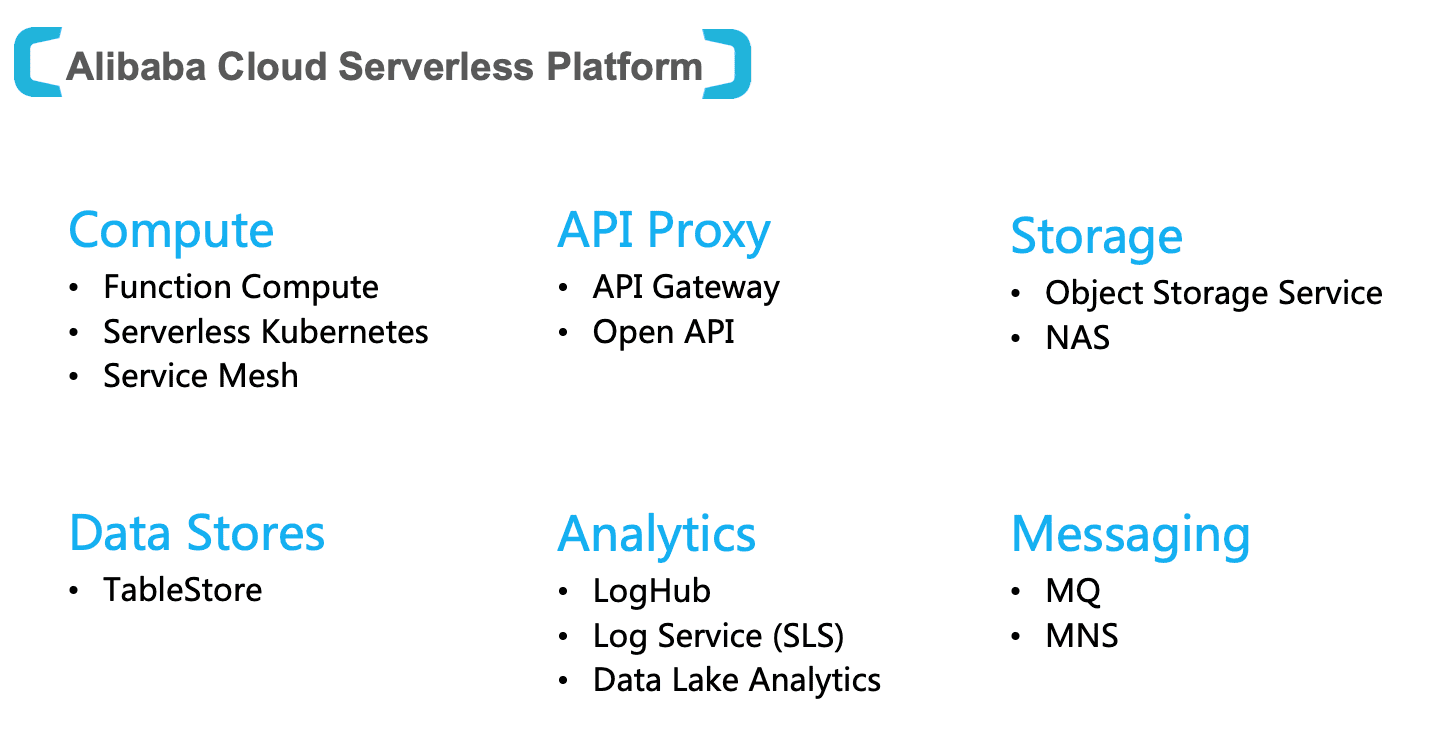