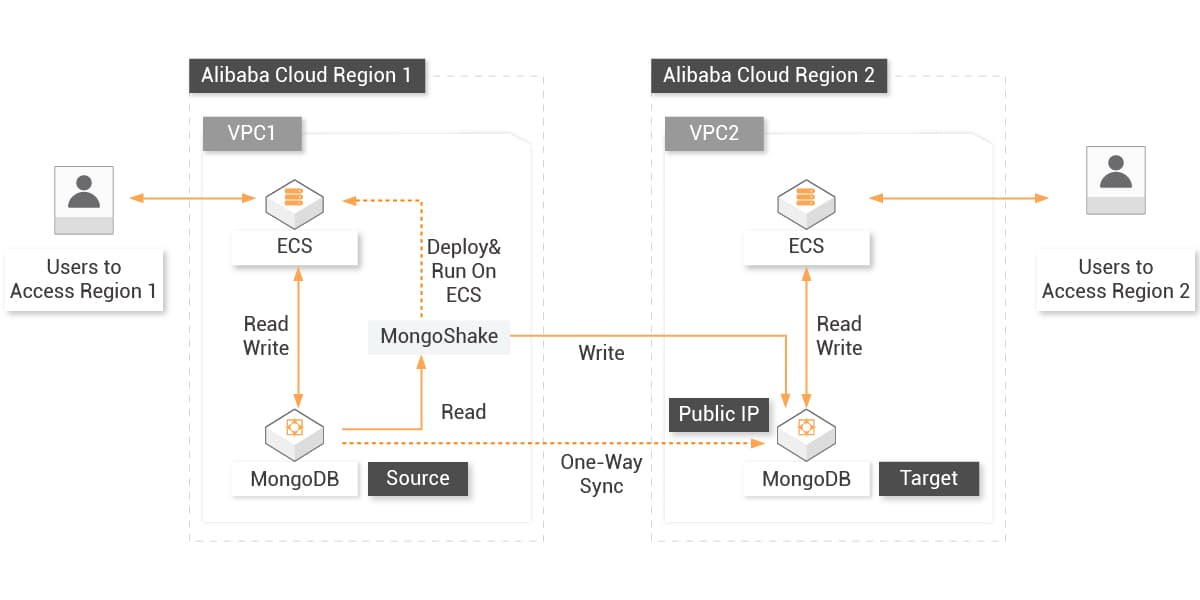 Steps
1. Install MongoDB instances in the specified regions. Then, install the ECS instance in the main business region where the source MongoDB is. MongoShake will be installed on this ECS instance later. In this solution, we use Terraform to build a MongoDB replica set and an ECS instance. 2. Configure the related security settings, such as accounts, security groups, and public network addresses on MongoDB and ECS .3. Install and configure MongoShake on ECS. 4. Activate the MongoShake service and run sample applications to read and write from MongoDB. Observe and check the data duplication process.5. Refer to the Terraform Template for Building Resources to configure Terraform.6. Refer to the Python Script for Monitoring Data Synchronization to write the Python script for monitoring the data synchronization of MongoDB.7. Refer to the Deployment Guide to complete the deployment process step by step.
Considerations
Operational Excellence
The Alibaba Cloud ApsaraDB for MongoDB console provides system monitoring metrics for CPU, memory, IOPS, disk usage, and networks. It offers customizable configurations and alarms to monitor the system and services, so you can swiftly respond to and resolve performance issues and define standard daily operations.
MongoShake provides the mongoshake-stat tool to monitor the data duplication process. You can evaluate the data transmission quality through metrics, such as data volume and latency.
Security
Alibaba Cloud ApsaraDB for MongoDB supports SSL and TDE encryptions to guarantee data security during transmission and storage. You can create whitelists or ECS security groups for MongoDB instances to enhance permission management.
Reliability
The 3-node ReplicaSet and sharding cluster of Alibaba Cloud ApsaraDB for MongoDB guarantee the high availability of MongoDB services. Alibaba Cloud also guarantees the SLA of MongoDB.

Solve all data problems with matured and customized architectures

Alibaba Cloud has been placed in the LEADERS quadrant of the Gartner Magic Quadrant for Cloud Database Management System report published on 23 November 2020.

Refer to this Terraform template to build ReplicaSet of MongoDB and ECS.

Refer to this Python script to monitor the data synchronization of MongoDB.

Get professional services to improve the performance, stability and security of databases that runs in your Alibaba Cloud ecosystem.