This tutorial demonstrates how to use the anti-bot features of the Alibaba Cloud Web Application Firewall (WAF) to prevent unwanted access to servers and websites.

The WAF provides protection against many common threats such as database injection attacks, cross-site scripting, and all of the Open Web Application Security Project (OWASP) Top 10. Because these types of attack affect every server and website, no additional configuration steps are required – the features are active as soon as the WAF is enabled. However, this also means that attacks which are unique to your servers, such as repeated attempts to access your service from a competitor’s IP address range, can’t be catered for.

The anti-bot features detailed in this tutorial are specific to your installation, based on the type of attacks you’re receiving and where they are coming from. You can configure them from the Alibaba Cloud console, and amend them whenever you like. The anti-bot features include blocking access to a server from IP addresses which are considered a threat, and restricting access to specific URLs if multiple requests beyond a specified threshold are coming from suspicious addresses.

To learn more about the out-of-the-box features of the WAF you may find it simpler to start with the Web Application Firewall tutorial at this link. If you don’t currently need the additional ability to configure your individual WAF installation to protect against bot attacks, the tutorial is particularly relevant.

If you don’t already have an Alibaba Cloud account then you can sign up at www.alibabacloud.com and this will also get you $300 of free credit, $250 of which can be used towards a WAF subscription. The other $50 can be used to create a server or website for the WAF to protect. 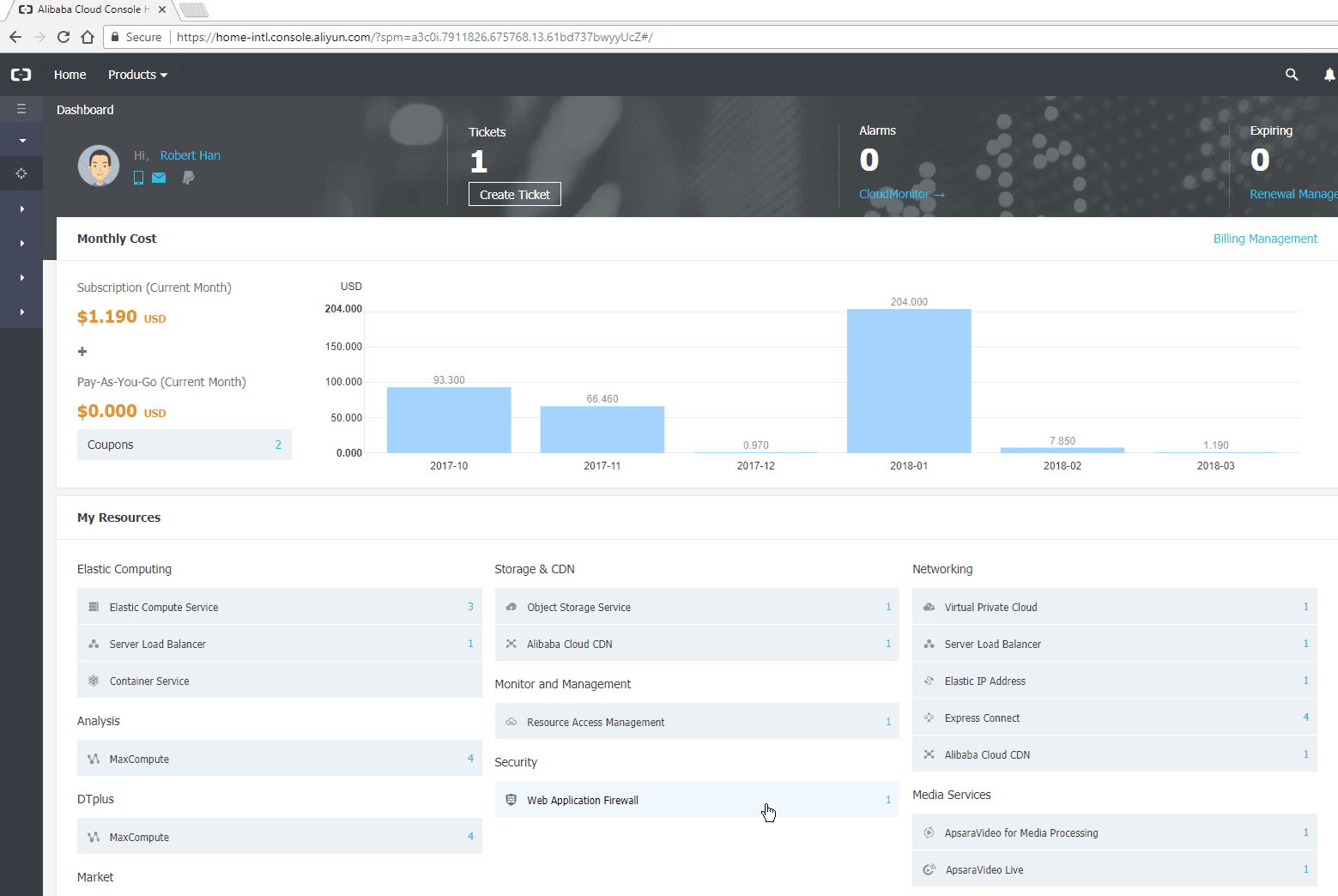 If your existing WAF is not for the Mainland China region, then you’ll see the following screen. In this case, click the region selection and change it to International in order to see your existing WAF setup.

Let’s look more closely at the current default settings, which are shown on the right hand side of the screen. 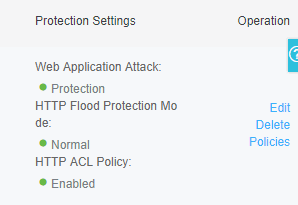 Firstly, we can see that Web Application Attack Protection is turned on. This covers attacks such as database injections, cross-site scripting, and other common attack types which constitute the well-known OWASP Top 10 list (see the Open Web Application Security Project at www.owasp.org to learn more). This feature works straight out of the box and is enabled by default, and you shouldn’t change it. 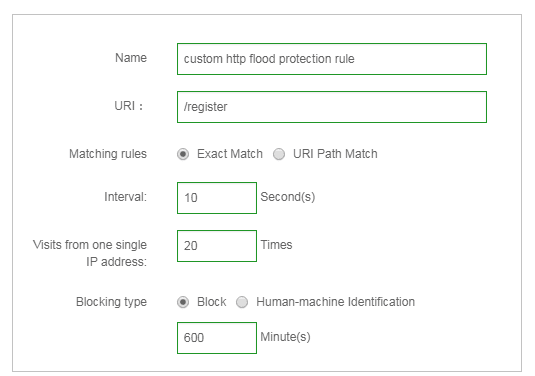 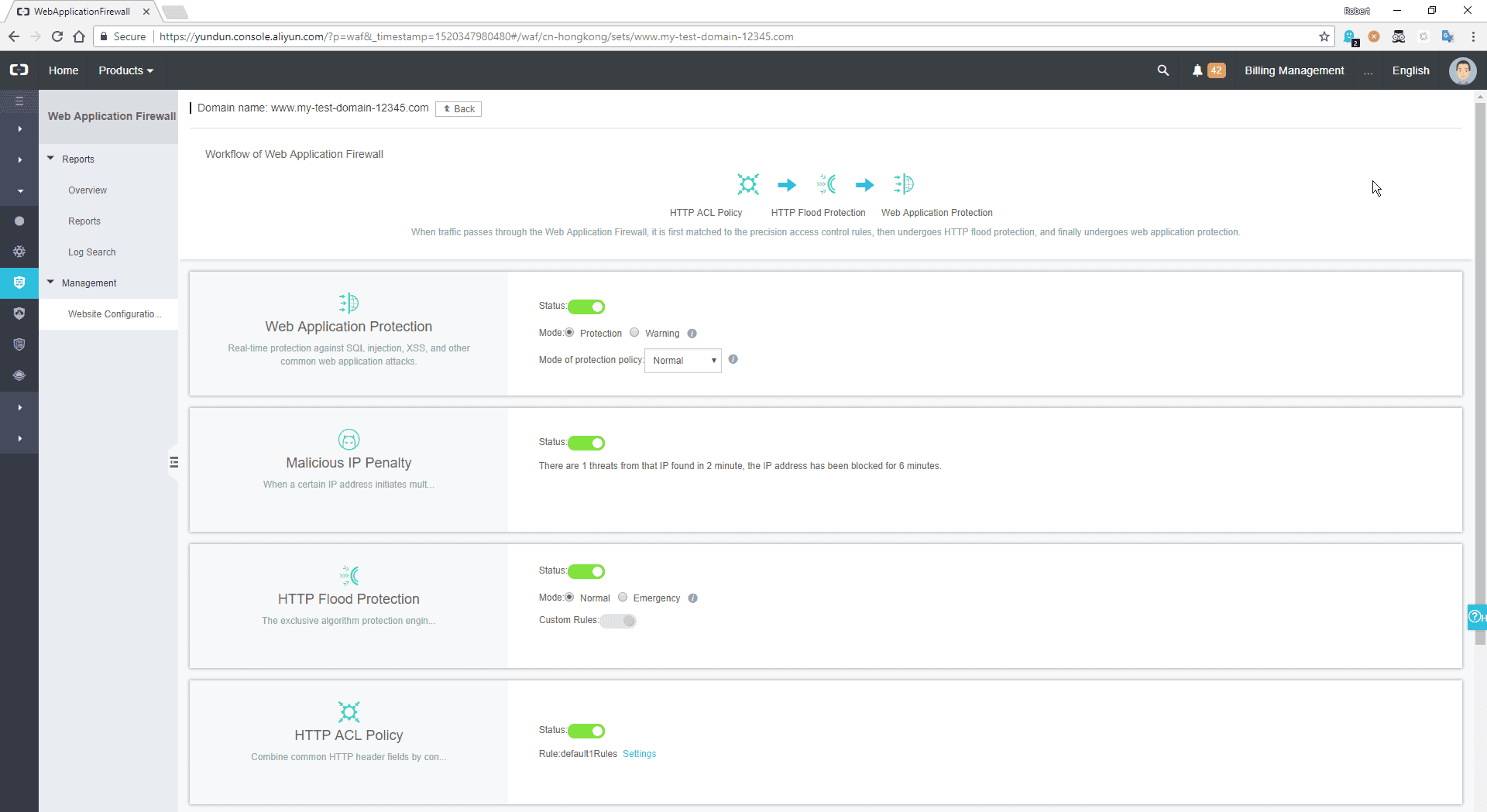 HTTP is the communications protocol that web browsers (or other user agents such as bots) use to communicate with web servers. An ACL is an Access Control List. The HTTP ACL feature allows you to set up rules which block malicious requests. By default, the HTTP ACL feature is enabled. Click on the Settings link and you’ll see something like this:

It’s important to note that everything covered in this tutorial so far is an automatic feature which protects all sites and servers equally, and needs no configuration apart from being enabled. 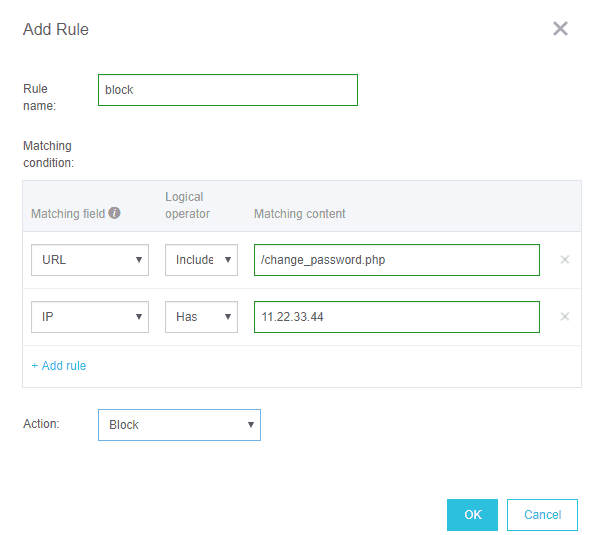 To view details about the various matching fields that you can use, hover your mouse over the “i” icon to reveal a helpful graphic, as shown below. 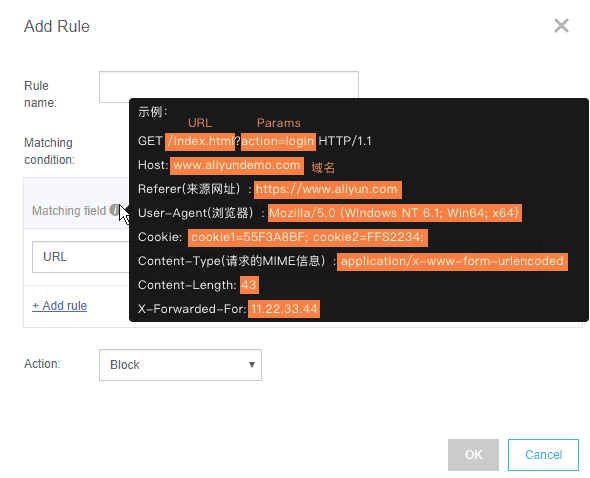 When you’re matching against a URL, the general rule is that “URL” matches any text which occurs before the question mark, and “Params” (parameters) is for matching text after the question mark. So, in the example shown in the image above, attempting to match “login” by specifying it as part of the target URL will not work as it needs to be specified as a parameter.

There are three Action types, which allow you to specify what action the WAF should take if a match is found. These are block, warn or allow. “Warn” means that the access will be allowed, but will be logged. If you’re not sure whether blocking a certain string will have an adverse effect on legitimate visitors to your server or site, start by logging instead of blocking, and then examine the logs to see whether the incoming traffic appears to be malicious in nature.

To search the logs, click on the Log Search link on the left-hand side of the WAF screen. However, note that the log search feature is only available in the Enterprise version of the Web Application Firewall, and activity which occurred before you enabled the log feature will not have been stored and thus cannot be searched.

If your server is running WordPress and you use the pingback feature to allow users to be notified when someone replies to their blog comment, you are vulnerable to what’s known as a pingback or bounce attack. By abusing the pingback feature, an attacker can cause a WordPress site to slow down or crash.

If you were to look in the server logs of a WordPress site suffering such an attack you’d see something like this in the list of user agents that have been accessing your site.

As you can see, all of the malicious traffic has a user agent string that contains the words “WordPress” and “pingback”. We can use this to construct a simple WAF rule to protect our site from such attacks. 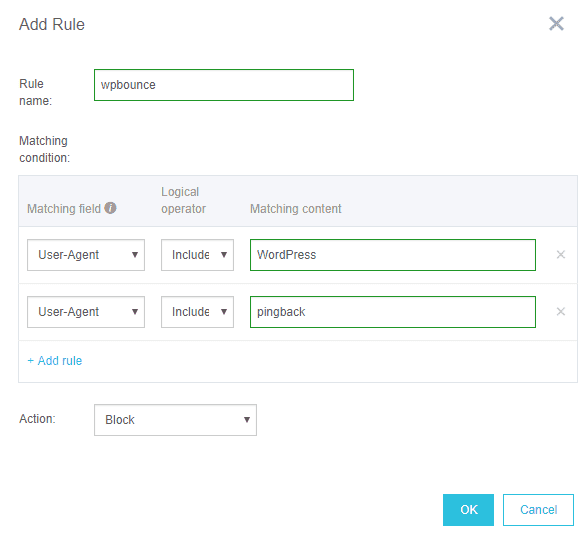 Images and videos on websites require a significant amount of bandwidth to host. Consequently, it is common for selfish website operators to link to graphical content on other people’s sites instead of hosting the files locally on their own server. This means that, whenever someone views a page of the selfish operator’s site, one or more images or videos might be loaded from elsewhere because the URL of the image points to somewhere other than the selfish operator’s server.

If you discover that a particular website is leeching images or other content from your site, you can create a WAF rule to block it. For example, if you find that www.selfish-site.com is referencing images from your company’s site, set up a rule as follows. The requests will then be blocked, and users of the selfish operator’s site will receive an error saying that the required image can’t be found. 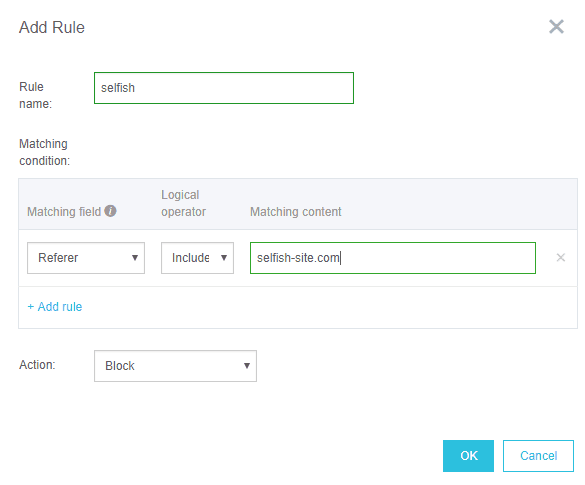 In this tutorial we have examined some of the anti-bot technology that’s built into the Alibaba Cloud Web Application Firewall, which you can configure in order to protect a server or website from being targeted by malicious user agents or web browser software.

The Alibaba Cloud Web Application Firewall is available on a simple monthly subscription starting at $299, and can be used to protect servers hosted with Alibaba Cloud or with any other organization. All that’s required is a DNS change in order to route incoming traffic via the WAF, where it is then filtered and passed on to the server that is being protected.