159 0
This article discusses OpenKruise for application deployment and addresses an Alibaba Cloud user's question about connecting to OpenKruise.

Currently, in Alibaba's internal cloud-native environment, OpenKruise is used for pod deployment and release management for most applications. Many companies in the industry and users of Alibaba Cloud also use OpenKruise for application deployment because Kubernetes native workload controllers, such as deployments cannot fully meet the requirements. This article begins with an Alibaba Cloud user's question about connecting to OpenKruise.

OpenKruise is an open-source automated management engine for large-scale applications, which is provided by Alibaba Cloud. It provides features similar to Kubernetes' native controllers, such as Deployment and StatefulSet. In addition, OpenKruise provides more enhancements, such as graceful in-place update, release priority and scatter update, abstract management of multi-zone workload, and centralized management of sidecar container injection. These features have been tested in ultra-large-scale application scenarios at Alibaba. Moreover, these features help us cope with more diverse deployment environments and requirements, and bring more flexible deployment and release combination strategies for cluster maintainers and application developers.

Currently, in Alibaba's internal cloud-native environment, OpenKruise is used for pod deployment and release management for most applications. Many companies in the industry and users of Alibaba Cloud also use OpenKruise to deploy applications because Kubernetes native workload controllers, such as deployments cannot fully meet the requirements.

This article starts with a question from an Alibaba Cloud user about connecting to OpenKruise. Here is what the customer did. The following YAML data is a demo only.

1. Prepare a YAML file of Advanced StatefulSet, and submit for creation. The following is an example:

2. Modify the image version in the YAML file and call the Kubernetes API to update the image. An error is returned and it looks like this:

3. If you run the kubectl apply command to update the image, a success message is returned.

Based on the communication with users, we find that most of them have already used kubectl commands or SDKs to update Kubernetes resources. However, only a few of them understand the mechanism behind these update operations. This article focuses on the resource update mechanism of Kubernetes and how some common update methods are implemented.

Mechanisms for an Update

Have you ever wondered, for a Kubernetes resource object, such as a deployment, when you try to modify the image in it, if other users are also modifying the deployment at the same time, what will happen?

Two questions can be derived here:

Now, let's get back to the former question: Why did the update fail after the user submitted a modified YAML file? This is because the update is limited by the version control of Kubernetes for update requests.

Kubernetes requires that objects submitted in user update requests must contain resourceVersion. This means that data submitted for an update must first come from the existing objects in Kubernetes. Therefore, a complete update process is: 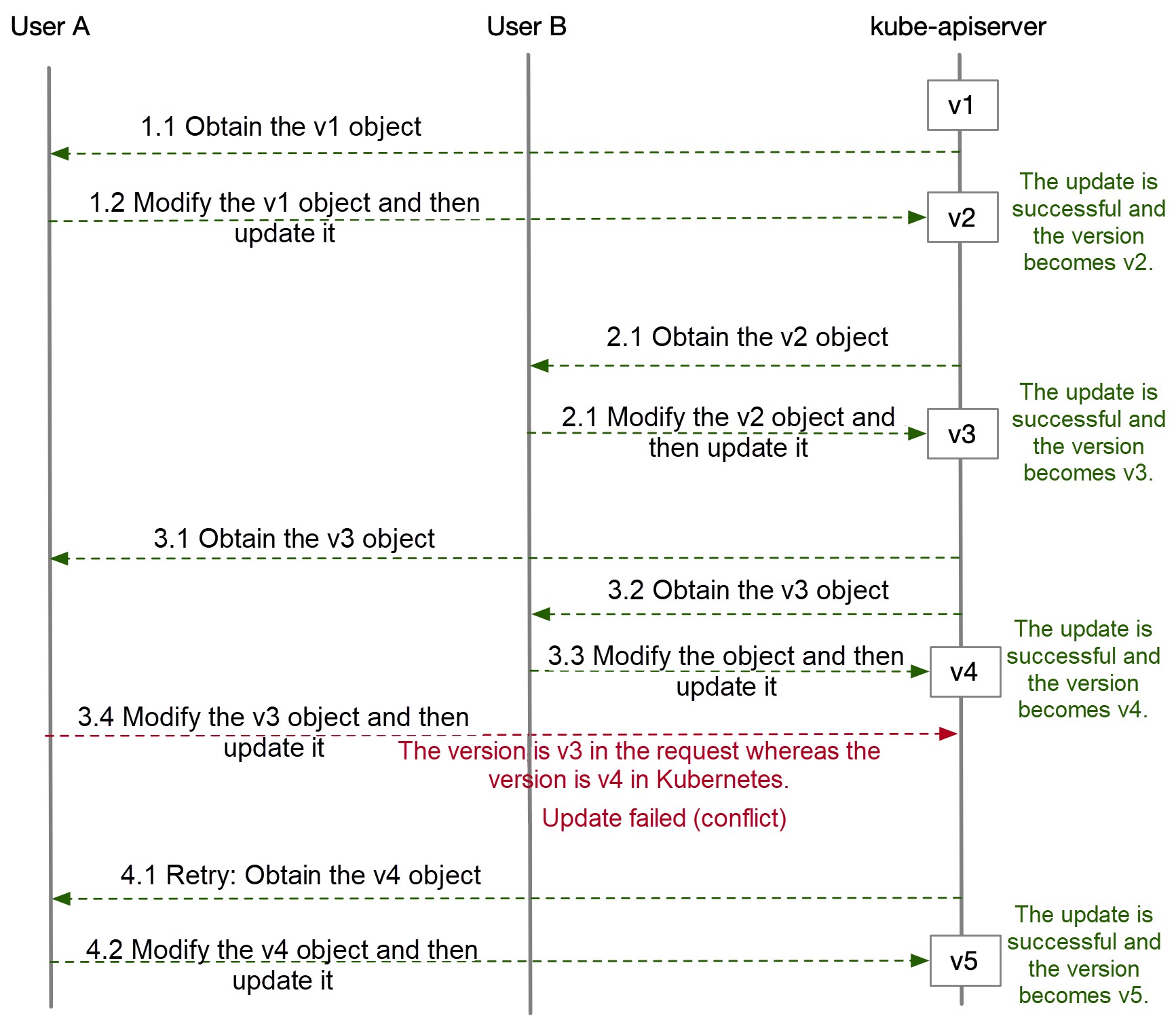 The preceding figure shows what happens when multiple users update a resource object at the same time. If a conflict occurs, User A needs to retry and obtain the object of the latest version again, and submit the update request.

Therefore, both the preceding questions have been answered:

Compared with the version control of the update mechanism, the patch mechanism of Kubernetes is simpler.

When you submit a patch request for a resource object, the kube-apiserver does not consider the version issue but accepts the request as long as the patch request content is valid. The object is patched and the version number is updated at the same time.

However, the complexity of the patch mechanism lies in the fact that Kubernetes provides four patch policies: JSON patch, merge patch, strategic merge patch, and apply patch (server-side apply is supported since Kubernetes Version 1.14.) You can also see this policy option by running the kubectl patch –h command. By default, strategic is used.

Due to space limitations, we will not describe each policy in detail here. Let's use a simple example to see their differences. For an existing deployment object, assume that a container named app already exists in the template:

Modify the image of the app container:

In this way, if the object has been modified by other users before you use a patch, your patch may have unexpected results. For example, when you update the image of the app container, you can specify container 0. However, another container is inserted into the first position of the container list. The updated image is incorrectly inserted into this unexpected container.

You cannot use the merge patch alone to update an element in the list. Therefore, whether you want to add a container or modify the image, env, and other fields of an existing container, you need to specify the entire container list to submit the patch:

However, for updates of map-type elements, such as labels and annotations, the merge patch allows you to specify the key-value operation separately. Compared with JSON patches, the merge patch is more convenient and intuitive:

This patch policy does not have a general RFC standard. It is unique to Kubernetes but more powerful than the first two policies.

In the source code of Kubernetes, some additional policy annotations are defined in the data structure definitions of native Kubernetes resources. The following example shows the definition of the container list in the podSpec. For more information, see GitHub:

This indicates that when the container list is updated based on the strategic merge patch policy, the name field in each element is considered as the key.

In short, when you use a strategic merge patch to update the containers, you no longer need to specify the index. Instead, you need to modify a container by specifying the name. Kubernetes calculates the merge by using the name as the key. Take the following patch operation as an example:

Note: The strategic merge patch policy can only be used for native Kubernetes resources and custom resources based on Aggregated API. They cannot be used for resource objects defined by CRD. This is easy to understand because kube-apiserver does not know the CRD resource structure and the merge policy. If you run the kubectl patch command to update a CR, the merge patch policy is used by default.

Now that we've learned about the basic update mechanism of Kubernetes, let's return to the original issue. After you modify a YAML file, you cannot directly call the update operation to update the YAML file. Why can you use the kubectl apply command to update it instead?

To give CLI users a good experience of interaction, kubectl provides a complex internal execution logic. Common operations, such as apply and edit, do not correspond to a simple update request. Update operations are limited by version control, and an update conflict is unfriendly to common users. The following content briefly introduces the logic of several kubectl update operations. If you are interested, see kubectl encapsulated source code.

When you run the kubectl apply command with default parameters, client-side apply is triggered. This is the kubectl logic:

First, the data submitted by the user (YAML or JSON) is parsed into object A and then calls the Get operation to query the corresponding resource object from Kubernetes:

This is just a general process. The real logic is more complex. The server-side apply has been supported by Kubernetes since Version 1.14. If you are interested, see the source code implementation.

The kubectl edit command is simpler logically. After you run the command, kubectl finds the current resource object in Kubernetes and opens a command line editor (vi is used by default) to provide an editing interface to you.

When you complete the modification, save the object and exit. kubectl does not directly submit the modified object for updates. This is to avoid conflict if the resource object is updated during your modification process. Instead, the diff is calculated between the modified object and the object obtained initially. Finally, the diff content is submitted to Kubernetes in a patch request.

Now, you have a preliminary understanding of the Kubernetes update mechanism after the preceding introduction. Let's think about this question: Kubernetes provides two update methods, but how can you choose between update or patch in different scenarios? Below are the recommendations:

Finally, our customer modified the object obtained and submitted it for updates, which ultimately triggered the in-place upgrade of Advanced StatefulSet. We also welcome and encourage more people to participate in the OpenKruise community. Let's work together to create a high-performance application delivery solution for large-scale scenarios.

Enabling Rolling Updates for Applications in Kubernetes with Zero Downtime