Alibaba Cloud AnalyticDB for PostgreSQL is a massively parallel processing based data warehouse service on Alibaba Cloud. Its kernel was evolved from the Greenplum open-source database based on the PostgreSQL engine, with improved analysis performance. The column-store meta scan function is key to improving database query performance.

AnalyticDB for PostgreSQL supports column stores and features high data compression performance and superior query performance. However, given that the database system reads data from the entire column or creates a B-Tree index when processing query criteria with a high filter rate, two constraints affect indexing. The first is that indexes are not compressed, which can lead to data bloat. The other constraint is that large result sets lead to index failure and a higher index cost than that of tablescan.

As a further enhancement of column store tables, the meta scan function collects the maximum and minimum values from the columns of a column store table to implement a filtering function similar to indexing based on the block-offset mechanism. The metadata stores the maximum value, minimum value, and offset, all of which are collected from each block of columns. The maximum and minimum values are used for conditional filtering. The block offset is used to skip the blocks that do not meet filter conditions. This minimizes the I/O of reading column stores and the CPU consumption of block decompression, ultimately improving query performance. In a TPC-H 1 TB test, query performance increased by 29% and can be increased by up to 500% in queries based on conditions with a high filter rate, such as Q06, Q12, Q14, and Q15 of TPC-H.

Implementation of the Meta Scan Function

The meta scan mechanism of Alibaba Cloud AnalyticDB for PostgreSQL relies on metadata that is similar to metadata in the open-source ORC and Parquet formats. The metadata is used to filter out the blocks of a column store table that do not meet specified conditions. In short, this helps improve query performance.

As shown in the figure above, AnalyticDB for PostgreSQL divides the data of each column store table into two parts. One part is the table data, and the other part is the metadata, which is collected into storage. When the table is scanned, the meta scan function reads the metadata, filters out the blocks that do not need to be read based on the minimum and maximum values, and directly reads the blocks that meet conditions based on the block offset. Then, it returns the tuple to the executor, which returns the calculation result to the client.

In AnalyticDB for PostgreSQL, metadata is stored in the following format: 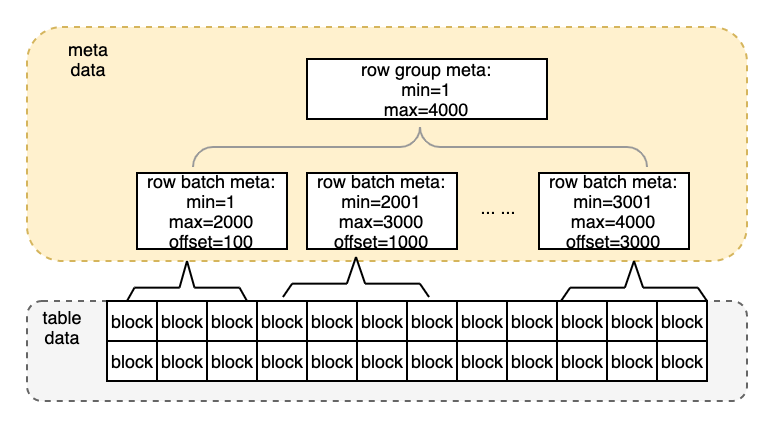 Metadata is divided into row group and batch group metadata by row.

For the sake of simplicity as well as improved transaction attributes, metadata is stored in auxiliary tables in the form of heap tables. A meta table is also created when a column store table is created. As such, consistency and atomicity are guaranteed for metadata and table data through the multiversion concurrency control (MVCC) feature of heap tables and the transaction mechanism.

AnalyticDB for PostgreSQL provides the sortkey function used to sort data in a single table partition based on specified columns. The meta scan function performs better when combined with the sortkey function. Despite effective filtering, the meta scan function does not perform well when column values are not evenly distributed in a data file. Only a few blocks are skipped when column values are scattered across many blocks. You can create a sortkey for the table so that the data in a single partition is sorted based on filter fields. As such, identical values can be located in consecutive blocks, allowing the meta scan function to skip many blocks during the scan process. This improves scan performance.

TPC-H is a standard test set for testing the performance of online analytical processing (OLAP) data warehouses. This test primarily measures the response time of each query, or more specifically, the time that elapses from query submission to the return of results. We tested the acceleration effect on TPC-H through the meta scan function in AnalyticDB for PostgreSQL. For the test, we created a sortkey for four tables and performed the TPC-H test on a hard disk drive (HDD) with 1 TB data.

The TPC-H test results are as follows. The meta scan function significantly improved the TPC-H performance for queries with strong filter conditions, but it did not improve the performance for full table scans and table join operations.

Upgrade Your Existing Instances with the Meta Scan Function

To enable or disable the meta scan function at the instance level, submit a ticket to contact an Alibaba Cloud customer services representative.

In AnalyticDB for PostgreSQL, the column-store meta scan function is used to filter out non-compliant blocks based on the maximum and minimum values of row group and batch group metadata so that only compliant blocks need to be read. This reduces the scan I/O and the CPU consumption during block decompression. Therefore, the meta scan function can significantly improve the performance of queries with strong filter conditions.