1,328 0
In this "Getting Started with Kubernetes" tutorial, we will discuss the various pods and container design modes in detail.

1) Why Pods Are Needed

The Concept Behind Containers

Pod, an atomic unit of scheduling, is a very important concept in Kubernetes. However, this concept is not applicable while using Docker containers. To understand pods, it"s significant to understand containers first.

A container is a process with isolated viewing and restricted resources. Example of a Real Operating System

An application named HelloWorld comprises a group of processes. Here, note that the processes are equivalent to threads on Linux.

Threads on Linux are lightweight processes. When viewing pstree in HelloWorld on Linux, see that HelloWorld consists of four threads, which are api, main, log, and compute. These threads cooperate with each other and share the resources of HelloWorld.

The preceding is a real example of a process group or thread group in the operating system. The Concept Behind Process Groups

In the same preceding example, HelloWorld consists of four processes that share some resources and files. Then, how HelloWorld be run in a container?

The most common way is to start a Docker container that runs the four processes. In this case, it"s critical to know which process in the container is the one with PID 1. For example, if the PID of the main process is 1, which one is responsible for managing the other three processes?

For example, HelloWorld has the system capability or directly changes the process with PID 1 in the container to systemd. Otherwise, the application or container cannot manage multiple processes. In case the users kill the process with PID 1 or it crashes during the running process, none is responsible for reclaiming the resources of the other three processes, which leads to a serious problem.

To summarize, a container is actually a single-process model. Therefore, if you start multiple processes in a container, only one process has the PID of 1. If this process fails or exits, the other processes become orphan processes, and their resources cannot be reclaimed.

Alternatively, run systemd in a container to manage all other processes. In this case, applications cannot be directly managed because they are taken over by systemd. Therefore, the lifecycle of the applications is different from that of the container. The management model is quite complex. 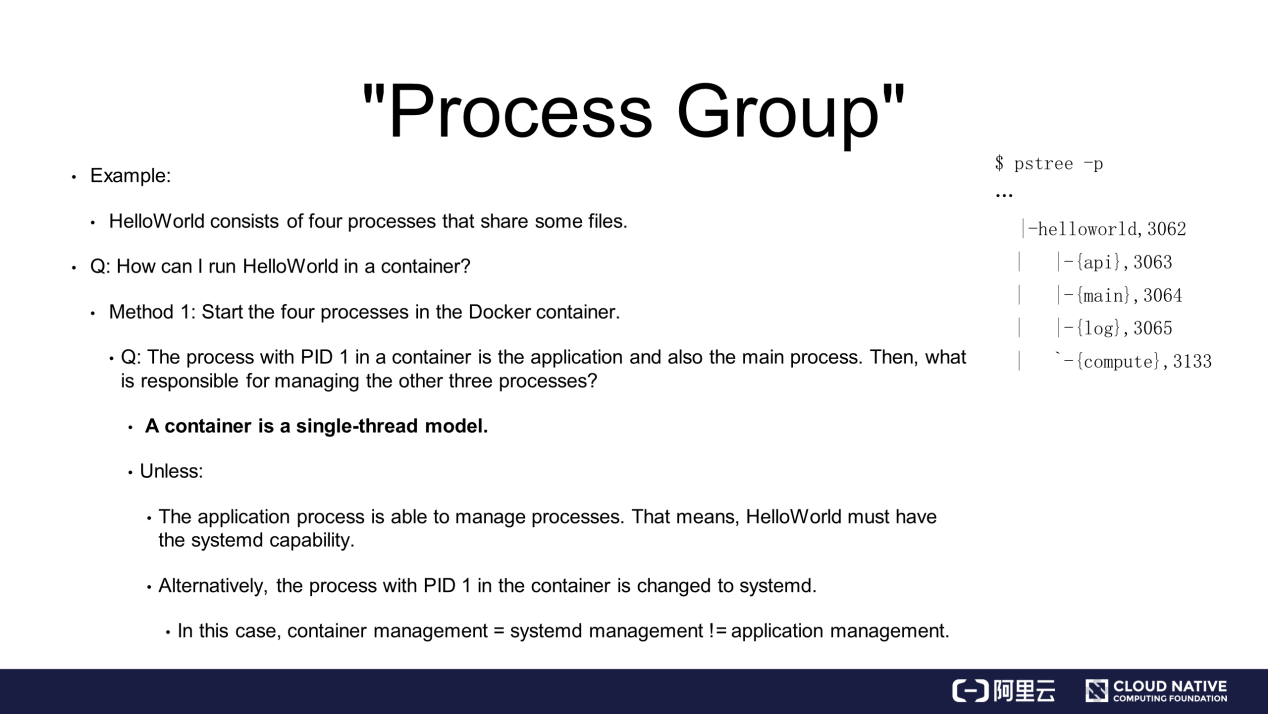 The Pod as a Process Group

A pod is abstracted by Kubernetes and is similar to a process group.

As mentioned previously, the HelloWorld application consists of four processes. This application is defined as a pod with four containers in Kubernetes. This concept is very important. The aforementioned pod design is not derived from Kubernetes but was discovered when Google engineers were developing Borg. This is described in detail in the Borg paper. In short, Google engineers found relationships similar to those between processes and process groups in many scenarios when deploying applications in Borg. More specifically, these applications cooperate so closely that they must be deployed on the same server and share certain information.

Reason for Using a Pod as an Atomic Unit of Scheduling

After understanding that a pod is a process group, one might have the following questions:

To answer these questions, let's consider the following example.

Two containers closely cooperate with each other. Therefore, they must be deployed in the same pod. Specifically, the first container is named App, which is a business container and generates log files. The other container is named LogCollector, which forwards log files generated by the App container to ElasticSearch at the backend.

What would happen if no pod definition were available in this case? The answer is, both containers would have to work closely together on the same server. If the scheduler first schedules the App container to Node_A, note that the LogCollector container cannot be scheduled to Node_A due to insufficient resources. In this case, the entire application is defective and the scheduling fails. The preceding example is a typical case of task co-scheduling failure. This problem can be solved in many ways.

For example, Mesos implements resource hoarding. This implies that unified scheduling starts only after all tasks with affinity constraints are in place. This is a typical solution to the problem.

Therefore, the App and LogCollector containers in Mesos are scheduled in a centralized manner only when both containers are submitted. However, this also introduces new problems. At first, the scheduling efficiency is reduced due to waiting. Furthermore, deadlocks occur due to mutual waiting. It is quite complex to solve these problems in Mesos.

Another solution is Google's optimistic scheduling, a very complex and useful solution in the Omega system, which is the next generation of Borg. For example, scheduling is performed regardless of conflicts, and a well-designed rollback mechanism is in place to solve these conflicts by the rollback. This method is more graceful and efficient, but its implementation mechanism is very complex. It is well-known that the configuration of pessimistic locks is simpler than that of optimistic locks.

What Is a Pod?

This section helps you further understand pods. Containers in a pod have a super affinity with each other. Generally, an affinity problem is solved by scheduling. Now, what is a super affinity? It can be divided into the following categories:

All the preceding relationships are super affinities and are solved by using pods in Kubernetes.

To conclude why pods are required, it"s important to understand that pods help to:

A pod is a logical concept. The following explains how to implement a pod on a server:

The core to this case is to efficiently share certain resources and data among multiple containers in a pod.

Containers are separated by Linux namespaces and control groups (cgroups). Therefore, the solution is to remove the separation and share resources and data among containers, which is the major concern for pod design. How do containers share storage in a pod? This is quite simple.

For example, a pod contains an Nginx container and a common container. To access files in the Nginx container through Nginx, it"s mandatory to share the directory. Sharing files or directories in a pod is simple, which is actually done by shifting volumes to the pod level. All containers in the pod share all volumes. As shown in the preceding figure, the volume is named shared-data and is located at the pod level. The shared-data volume is shared by containers after being mounted into the containers. This is how Kubernetes shares storage for containers in a pod.

In the preceding example, the App container writes logs into a volume. The volume is immediately visible to the LogCollector container after being mounted to the container. This is how a pod implements storage sharing.

Now, after understanding why a pod is required and how pods are implemented, let"s deep dive into the container design mode, which is advocated by Kubernetes.

For example, to release an application written in Java, one must save a WAR package in the web apps directory of Tomcat to start the application. Several methods are available to implement the same. This operation is complex, and the container must depend on a persistent storage plug-in for managing the WAR package content in the volume.

A more commonly used method is needed to use or release an application even if no distributed storage is available in the local Kubernetes instance.

In Kubernetes, Init Container is exactly the method. The app directory to which the WAR package is copied is actually a volume. As mentioned previously, a pod contains multiple containers that share a volume. Therefore, only a Tomcat image is packaged in the Tomcat container. However, before startup, the container needs to declare the app directory as its volume and mount the package to the webapps directory.

Therefore, a pod is self-inclusive and may start in any Kubernetes instance in the world. The pod is released regardless of whether a distributed storage system is present or whether the volume is persistent.

In this typical example, two containers playing different roles are combined to package the application according to the Init Container in a pod. This is a typical container design mode in Kubernetes, which is named Sidecar.

It implies defining some special containers in a pod to complete certain auxiliary work for the main business container. In the preceding example, the Init Container is a Sidecar that only copies the WAR package from an image to the shared directory for the Tomcat container.

The sidecar also performs some other operations.

One obvious advantage of this practice is that it actually decouples the auxiliary functions from the business container, allowing the Sidecar container to be released independently. More importantly, this capability can be reused. That is, the monitoring Sidecar or log Sidecar may be shared throughout the company. This is the strength of the design mode. This section introduces other application scenarios of Sidecar.

For example, in the case of application log collection, the business container writes logs to a volume that is shared in a pod. This allows the log container (Sidecar container) to share the volume, read log files, and then store them into remote storage or forward them to another case. For Fluentd log processes or log components that are commonly used in the industry, they work basically in the same way. 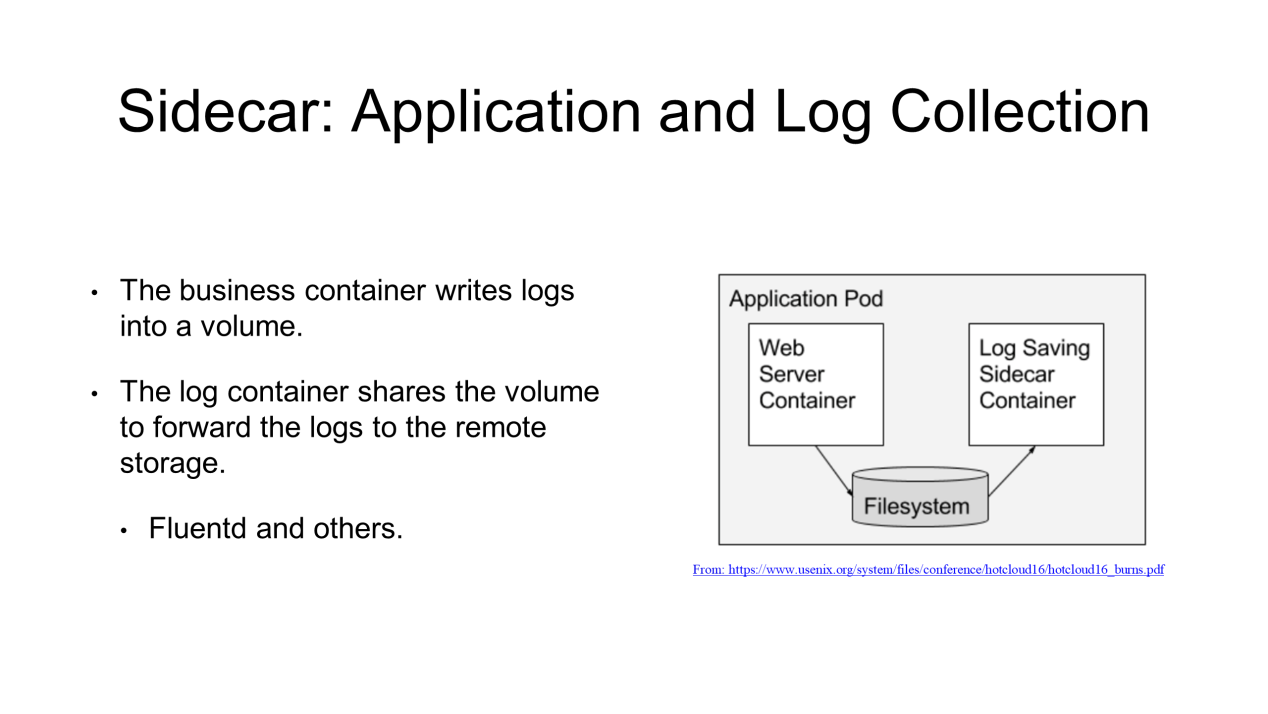 Assume a pod needs to access an external system or some external services, but the external system is a cluster. In this case, how can all the clusters be accessed with one IP address? As a solution, modify the code that records the addresses of these clusters. Alternatively, use a decoupling method- the Sidecar proxy container.

For this method, develop a small proxy to connect to external service clusters, with only the IP address of the proxy exposed. In this case, the business container connects to the proxy, which then connects to the service clusters. Containers in a pod directly communicate with each other through the localhost without any performance degradation, as they share the same network namespace and network view. An adapter container is the third design mode of Sidecar. For example, the exposed monitoring API of the business container is /metrics, and you can access the API by accessing the /metrics URL of the container. However, the monitoring system has been upgraded and its access URL is /healthz. In this case, monitoring is unavailable because only the /healthz URL is exposed, not the /metrics URL. To address this, either modify the code or develop an adapter to forward the requests destined for /healthz to /metrics. Then, the adapter exposes the /healthz URL to the external system, and the business container continues to work.

Here, the point is that containers in a pod directly communicate with each other through the localhost without any performance degradation. In addition, this adapter container might be reused throughout the company. These are all benefits of the design mode.

The following sums up the article in a lucid manner:

Pods and container design modes are fundamentals of the Kubernetes system. On reviewing the utilization of pods in a company or team, teams might find that the so-called "rich container" design is used. However, this design is only for intermediate transition as it creates many bad O&M habits. We strongly recommend gradually adopting the container design mode to decouple rich containers and split each of them into smaller pods. This is also an important part of Alibaba's full migration to the cloud.

Heroku: The Good and the Bad

Getting Started with Kubernetes | Application Orchestration and Management of Kubernetes