411 0
This article explains cloud computing from its birth to serverless.

The Birth of Cloud Computing

At the Centennial Ceremony of MIT in 1961, John McCarthy (winner of the Turing Award in 1971) first put forward the concept of Utility Computing, which can be regarded as an initial and advanced model of cloud computing. In 1984, John Gage, Co-Founder of Sun Microsystems, proposed the important conjecture, "The Network is the Computer." It described the new world brought about by distributed computing technology. In 1996, a group of technical executives at Compaq Computer Corporation used the term cloud computing for the first time when discussing the development of the computing business. They believed that commercial computing would shift towards cloud computing. This is also the basic process of cloud computing, from its embryonic form to its formal proposal.

Since cloud computing was proposed, it has enjoyed thriving development.

From Cloud Computing to Serverless

Cloud computing is developing rapidly, and its form is evolving constantly. From IaaS to PaaS and then to SaaS, cloud computing has gradually found the right development direction.

In 2012, Ken Form, Vice President of Iron.io, wrote an article entitled Why The Future of Software and Apps is Serverless. He put forward a new point of view, "Even though cloud computing has gradually developed, everyone is still revolving around servers. However, this situation will not last long. Cloud applications are moving towards serverless, which will have a significant impact on the creation and distribution of applications." This was the first time the word Serverless entered the public sphere.

In 2014, Amazon released AWS Lambda, and the Serverless paradigm was raised to a new level, providing a new system architecture for applications running on the cloud. As a result, it is no longer necessary to continuously run processes on servers to wait for HTTP requests or API calls but to trigger code execution through some event mechanism. Usually, this only requires a simple function to be configured on a server in AWS. After that, Ant Stanley explained his idea of Serverless around AWS Lambda and the just-released AWS API Gateway in an article entitled Servers are dead.. in July 2015. He said, "Servers are dead… They just don't know it yet."

In 2015, at the AWS re:Invent conference, the concept of Serverless appeared repeatedly in speeches, such as The Serverless Company Using AWS Lambda and JAWS: The Monstrously Scalable Serverless Framework. 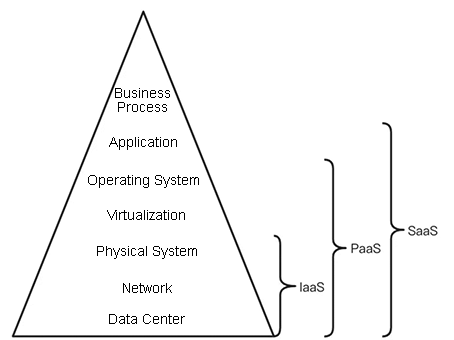 Differences between IaaS, PaaS, and SaaS

Serverless means no servers, but the so-called no servers does not mean you do not need to rely on resources, such as servers. Developers do not need to think about servers and can focus more on product codes. At the same time, computing resources also begin to appear as services instead of as the concept of servers. Serverless is a complete process of building and managing microservices models. It allows the users to manage their application deployment at the service deployment level instead of the server deployment level.

Different from traditional architectures, it is completely managed by a third party, triggered by events, exists in stateless status, and temporarily stored (may only exist in the process of one call) in the computing container. Serverless can realize automatic construction, deployment, and the start of services without involving more infrastructure construction in the deployment of applications.

In recent years, microservice is another popular topic in the software architecture field. Microservice is considered to be based on small function blocks, focusing on single responsibility and function to generate complex large-scale applications in a modular way. Then, we can consider how Serverless architecture can provide a software architecture paradigm focusing more on code fragmentation. This is called Function as a Service (FaaS). The so-called function provides smaller program units than microservices.

For example, microservices can be used to execute the code required to perform all CRUD operations for a customer, while functions in FaaS can represent each operation a customer wants to perform, such as create, read, update, and delete. When the creating an account event is triggered, the corresponding function will be executed through function. In this sense, we can simply equate the Serverless architecture with the FaaS concept. However, if the specific concept is explored deeply, Serverless and FaaS are still different. The widely accepted relationship between Serverless and FaaS is listed below:

In this relationship, we can see that Serverless is composed of a series of components besides FaaS and BaaS. This represents the infinite possibilities of Serverless.

The Development of Serverless

After the concept of Serverless was formally introduced in 2012, AWS Lambda started the commercialization of Serverless in 2014. In 2017, major service providers invested a lot of resources in the Serverless field one after another. In 2019, Serverless became a hot topic and was discussed by many people during KubeCon. With the continuous progress of technology, Serverless is gradually developing in a more mature and clear direction. With the approach of the 5G era, Serverless will play a vital role in more areas.

From IaaS, FaaS, SaaS, to today's Serverless, from virtual space to cloud resources, from self-built databases to cloud databases and other services, cloud computing is developing rapidly, but no one is sure about the direction and the final form of it. Liu Yu (Jiangyu) is a Ph.D. student majoring in electronic information at the National Defense University of Science and Technology, Serverless Product Manager and Evangelist of Alibaba Cloud, and special lecturer at CIO College.

He is the author of best-selling books Serverless Architecture: From Principle, Design to Project Practice, Serverless Engineering Practice: From A Beginner to An Expert, and the e-book Architect Special: Serverless Practice that Everyone Can Learn (published by InfoQ).

How Can We Monitor Containers as They Become More Widely Used?