19,896 0
This article briefly discusses the concepts of measuring memory performance of servers.

Memory is an essential part of a server, regardless of whether it is a physical machine or virtual machine. But the question is, how is memory performance measured? 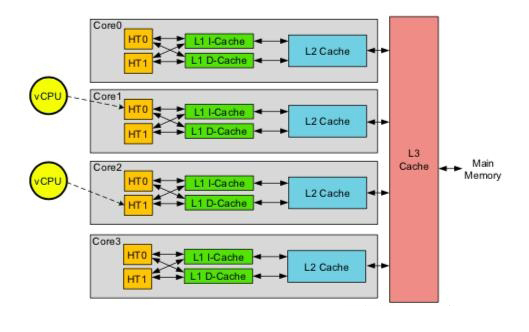 CPUs can obtain data faster from closer locations. LMBench can be used to test the data reading latency.

The preceding figure shows that:

This means, if you want your service code to have higher execution efficiency, ensure that execution is performed closer to the CPU. However, the preceding figure indicates that the memory latency is measured in nanoseconds, while the actual service speeds are measured in milliseconds. Therefore, optimization should focus on those operations that take milliseconds, and memory latency optimization is a matter of long tail.

Memory latency is closely related to caches. Without a good misunderstanding of memory latency, you may mistake cache latency for memory latency. If memory bandwidth tests are performed incorrectly, the cache bandwidth may be checked instead.

To understand memory bandwidth, it is necessary for us to learn about the architecture of memory and CPUs. In the past, CPUs were connected to the memory through a northbridge. Now, CPUs directly read data from memory using the integrated memory controller (IMC) of the CPU. According to the preceding figure, the principle of the stream algorithm is very simple. Data is read from one memory block and put into another after simple computing. The memory bandwidth is calculated using this formula: Size of data moved/Time elapsed. An appropriate test over the entire machine can reveal the bandwidth of the IMC. The following figure shows the memory bandwidth data of a cloud product:

Memory bandwidth is undoubtedly important, as it indicates the maximum data throughput of the memory. However, correct and suitable testing is very important. You need to pay attention to the following points: