8,975 0
This article demonstrates how different modes of Linux Virtual Server (LVS) implement load balancing and outlines the advantages and disadvantages of each network packet forwarding principle.

This article explains the forwarding modes of Linux Virtual Server (LVS) and their working processes. It describes the causes, advantages, and disadvantages of the network packet forwarding principle and illustrates the merits and demerits taking into account the Alibaba Cloud Server Load Balancer (SLB).

Let's take a quick look at the various terms and acronyms used in the article.

The Linux Virtual Server helps in load balancing by eliminating single point of failure (SPOF). There are multiple ways to forward packets; 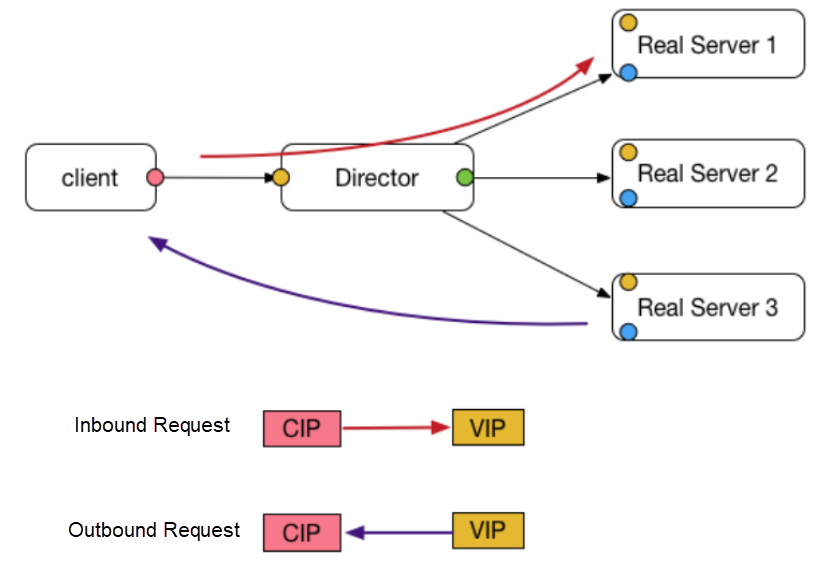 The preceding diagram illustrates how DR mode of LVS works. Now, let's consider the following example to understand the process.

As shown in the preceding process, after the request packet arrives at LVS, it just changes the destination MAC address of the packet, and forwards the response packet directly to the client.

The RS configures the VIP on the LO loopback network interface controller (NIC) and adds the corresponding rule to the route, so that the operating system (OS) processes the packets received at step 4.

Why Must LVS and RSs Belong to the Same VLAN or the Same L2 Network?

Reason For The Best Performance In DR Mode

Response packets do not pass through LVS. In most cases, request packets are small and response packets are large, which easily leads to a traffic bottleneck on the LVS. In addition, in DR mode, LVS only changes the MAC addresses of inbound packets.

RSs and LVS share the same VIP. Therefore, an RS correctly sets its SIP to the VIP while replying to a packet withoutLVS needing to change the SIP. In contrast, LVS changes the SIP during NAT and full NAT modes.

The following figure shows the structure in NAT mode.

The general process for this mode is as follows.

Why LVS and RSs Belong to the Same VLAN in NAT Mode?

Since, LVS only changes either the SIP or DIP of inbound and outbound packets, the full NAT mode emerges as a supplement. The greatest disadvantage of the NAT mode is that LVS and RSs must belong to the same VLAN, which limits the flexibility of deploying the LVS cluster and the RS cluster. NAT is basically impractical in commercial public cloud environments such as Alibaba Cloud.

This mode is similar to the NAT mode. The general process for this mode is as follows.

How Full NAT Resolves the LVS and RSs Problem of NAT Mode?

Taking cue from it's name, Full NAT LVS changes both, SIP and DIP of the inbound packet. Besides, the DIP of the response packet from the RS is the VIP (which is the CIP in NAT mode). Therefore, LVS and RSs can belong to different VLANs, provided that the L3 network between the VIP and RSs is available. In other words, LVS no longer needs to be a gateway, and LVS and RSs can be deployed in a more complex network environment.

Why CIP is Invisible to RS in Full NAT Mode?

Since the CIP changes in the Full NAT mode, the RS can only see the VIP of LVS. In Alibaba, the Option field of a TCP packet carries the CIP. On receiving the packet,RS usually deploys a self-defined TOA module to read the CIP from Option. In this case, the RS can see the CIP. However, this is not a universal open-source solution.

Summary of the Structure in Full NAT Mode

It is significant to note the IP address changes for the green inbound packet and the red outbound packet in the preceding figure.

So far, full NAT meets the same-VLAN requirement as in NAT mode, and is basically ready for the public cloud. However, this still does not resolve the problem that all inbound and outbound traffic passes through LVS, which implies that LVS needs to modify the inbound and outbound packets.

The concern here is to determine if there is a solution that doesn't restrict the network relationship between LVS and RSs prevailing in full NAT mode, and allows outbound traffic to bypass LVS as in DR mode.

The Enhanced NAT (ENAT) mode is also known as triangle mode or DNAT mode. The general process for this mode is as follows:

Why LVS and RSs May Belong to Different VLANs in ENAT Mode?

The reason is the same as discussed earlier for the full NAT mode.

Summary of the Structure in ENAT Mode

Finally, let's take a look at the less-used IP TUN mode. The general process for this mode is as follows:

The MAC address remains unchanged in IP TUN mode. Therefore, cluster nodes may belong to different VLANs, given that the communication between the IP addresses of LVS and RSs is available. Broadcasts between LVS and RSs must be available in DR mode.

Summary of the Structure in IP TUN Mode

In the preceding figure, the red line indicates the re-encapsulated packet whereas the IPIP module indicates a kernel module of the OS.

This article throws light on various modes of Linux Virtual Server (LVS). It covers the fairly popular DR mode along with the lesser known IP TUN mode. Further, it also highlights the other three modes which are analogous and more popular. Hope you find the working process of each LVS mode explained in this article pragmatic.

How to Create Cross Regional Network with CEN