What is Server Load Balancer and How It Works

Server Load Balancer distributes inbound network traffic across multiple Elastic Compute Service (ECS) instances that act as backend servers based on forwarding rules. You can use Server Load Balancer to improve the responsiveness and availability of your applications.

What is Server Load Balancer?

The Overview of Server Load Balancer

The Components of Server Load Balancer The Benefits of Server Load Balancer

How Does Server Load Balancer Work?

Server Load Balancer Best practice:
You can use session synchronization to prevent persistent connections from being affected by server failures within a cluster. However, for short-lived connections or if the session synchronization rule is not triggered by the connection (the three-way handshake is not completed), server failures in the cluster may still affect user requests. To prevent session interruptions caused by server failures within the cluster, you can add a retry mechanism to the service logic to reduce the impact on user access.

The high-availability solution with one Server Load Balancer instance

To provide more stable and reliable load balancing services, you can deploy Server Load Balancer instances across multiple zones in most regions to achieve cross-data-center disaster recovery. Specifically, you can deploy a Server Load Balancer instance in two zones within the same region whereby one zone acts as the primary zone and the other acts as the secondary zone. If the primary zone suffers an outage, failover is triggered to redirect requests to the servers in the secondary zone within approximately 30 seconds. After the primary zone is restored, traffic will be automatically switched back to the servers in the primary zone. In the context of one Server Load Balancer instance, traffic distribution for your applications can still be compromised by network attacks or invalid Server Load Balancer configurations, because the failover between the primary zone and the secondary zone is not triggered. As a result, the load-balancing performance is impacted. To avoid this situation, you can create multiple Server Load Balancer instances to form a global load-balancing solution and achieve cross-region backup and disaster recovery. Also, you can use the instances with DNS to schedule requests so as to ensure service continuity. The Architecture of Server Load Balancer Layer-4 Server Load Balancer runs in a cluster of LVS machines for higher availability, stability, and scalability of load balancing in abnormal cases. In an LVS cluster, each machine synchronizes sessions with other machines via multicast packets. As shown in the below figure, Session A is established on LVS1 and is synchronized to other LVS machines after the client transfers three data packets to the server. Solid lines indicate the current active connections, while dotted lines indicate that the session requests will be sent to other normally working machines if LVS1 fails or is being maintained. In this way, you can perform hot updates, machine maintenance, and cluster maintenance without affecting business applications. The Scenarios of Server Load Balancer

Server Load Balancer (SLB) can be used to improve the availability and reliability of applications with high access traffic.

Balance loads of your applications

You can configure listening rules to distribute heavy traffic among ECS instances that are attached as backend servers to SLB instances. You can also use the session persistence feature to forward all of the requests from the same client to the same backend ECS instance to enhance access efficiency.

You can extend the service capability of your applications by adding or removing backend ECS instances to suit your business needs. Server Load Balancer can be used for both web servers and application servers. 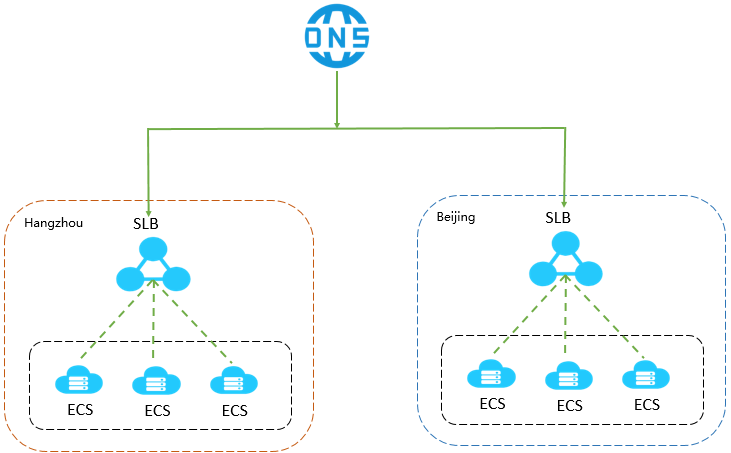 This article is intended for sharing my experience of what I have learned about Alibaba Cloud Server Load Balancer (SLB) from Alibaba Cloud Academy. Although this is not a new topic to me, I took the ACA course to get my fundamentals right as I believe it is very important. I've also learned a lot of new things, especially topics related to Alibaba Cloud-specific technologies. I gained a deeper understanding of how Alibaba Cloud can help my organization increase its profit by reducing operating costs.

A Server Load Balancer is a hardware or virtual software appliance that distributes the application workload across an array of servers, ensuring application availability, elastic scale-out of server resources, and supports health management of backend servers and application systems.

How Can a Server Load Balancer Help Your Website or Application?

Traditionally, we need a web server to provide and deliver services to our customers. Usually, we want to think if we can have a very powerful web server that can do anything we want, such as providing any services and serving as many customers as possible.

However, with only one web server, there are two major concerns. The first one is there is always limited to a server. If your business is booming, lots of new users are coming to visit your website so one day your website will definitely reach your capacity limit and will deliver a very unsatisfying experience to your users.

Also, if you only have one web server, a single point of failure may occur. For example, a power outage or network connection issues may happen to your servers. If your single server is down, your customers will be totally out of service, and you cannot provide your service anymore. This is the problem you may suffer when you have only one web server, even if it is very powerful.

AI Supports Automatic Generation of 90.4% of Frontend Modules during Double 11