1,047 1
In this article, the author explains how to optimize SQL performance in Apache Flink using multiple-input operators.

By He Xiaoling and Weng Caizhi

Flink's goal has continuously been optimizing execution efficiency. In most tasks, especially batch tasks, data is transferred between tasks through the network (called data shuffle) at a high cost. Usually, data is transferred from an upstream task to a downstream task through serialization, disk I/O, socket I/O, and deserialization. Only transmitting an octet pointer using a few CPU cycles is needed to transfer the same data in memories.

Flink 1.12 introduced multiple-input operator and source chaining optimizations for scenarios that operator chaining cannot cover. These optimizations will eliminate most of the redundant shuffles in Flink tasks, further improving the task execution efficiency. With an SQL task as an example, this article explains the preceding optimizations and shows the results achieved by Flink 1.12 on the TPC-DS test set.

We take TPC-DS q96 as an example to describe in detail how to eliminate redundant shuffles. The following SQL statement aims to filter and count the order quantity that meets specific conditions through multiple join operations.

How are Redundant Shuffles Generated?

Since some operators have requirements on the distribution of input data (for example, hash join operators require the same hash value of the data join keys within the same concurrency), when data is transferred between operators, it may need to be rearranged and collated. Like MapReduce's shuffle process, Flink shuffle organizes the intermediate results generated by upstream tasks and sends them to the downstream tasks that need these intermediate results. In some cases, however, if the output data generated by the upstream tasks meets the data distribution requirements (for example, multiple hash join operators with the same join key), the data collation is unnecessary. Thus, the shuffles generated at this time become redundant and are called forward shuffles in the execution plan.

The hash join operator in figure 1 is a special operator called broadcast hash join. Consider store_sales join time_dim as an example. Due to the small amount of data in the time_dim table, any concurrency can accept any data from the store_sales table without affecting the accuracy of the join result by sending the full data of the time_dim table to each concurrency of hash join through the broadcast shuffle. Meanwhile, the efficiency of hash join is also improved. Now, the network transmission between the store_sales table and join operators becomes a redundant shuffle as well. Similarly, the shuffles between several join operations are also unnecessary.

In addition to hash join and broadcast hash join, there are redundant shuffles in other scenarios. For example, hash aggregate and hash join with a group key as same as join key, multiple hash aggregates with group keys that are inclusive to each other, etc. We do not discuss this in detail here.

Is Operator Chaining a Solution?

The optimization is effective when data transmission between TMs via the network and files is reduced and operator links are integrated into tasks. It can reduce thread switching, message serialization and deserialization, data exchange in the buffer area, and reduce delay while improving overall throughput. However, operator chaining has stringent restrictions in operator integration. One of the restrictions is that "the indegree of the downstream operators is 1," which means the downstream operators can only have one input. This excludes multi-input operators such as join.

According to the operator chaining optimization, we can introduce a new optimization mechanism with the following conditions:

1) A combination of multi-input operators is supported; and

2) Multiple inputs (inputs for the integrated operators) are supported.

Then, we can run multi-input operators connected with the forward shuffle in the same task to eliminate unnecessary shuffles. The Flink community has noticed the shortcomings of operator chaining early. Flink 1.11 introduced MultipleInputTransformation in the streaming API layer and the corresponding MultipleInputStreamTask. These APIs meet the second condition above. Flink 1.12 has further implemented a new operator that meets the first condition — the multiple-input operator in the SQL layer. For more information, see the FLIP documentation.

Why not modify the existing operator chaining but seek other solutions? In fact, in addition to completing the operator chaining work, the multiple-input operator needs to prioritize each input. This is because some multi-input operators (such as hash join and nested loop join) have strict input order restrictions, and deadlock may occur if the input is not properly ordered. Since the information of operator input priority is only described in the operators at the table layer, it is more appropriate to introduce the optimization mechanism at the table layer.

Building and running the multiple-input operator is such a complex process. For more details, see the design documentation. The forward shuffles generated from the store_sales table (marked in the red box) in figure 6 indicate that there is still some opportunity for optimization. In most tasks, since operators such as join do not filter and process the data directly generated from the source, shuffles generate the largest amount of data. Consider TPC-DS q96 under 10 TB data as an example. Without further optimization, the task containing the store_sales source table will transmit 1.03 TB data to the network. After applying the join filter once, the data volume drops sharply to 16.5GB. If we can eliminate forward shuffles of the source table, we can make a big step forward in the overall job execution efficiency.

Unfortunately, the multiple-input operator cannot support source shuffle scenarios because the source has no inputs, unlike any other operators. Therefore, a new source chaining function has been added to operator chaining in Flink 1.12, which integrates sources that are not blocked by shuffle into operator chaining. As such, we can eliminate the forward shuffles between source and downstream operators.

Currently, the source chaining feature is only available on FLIP-27 source and multiple-input operators. However, this is still enough to meet the requirements of the scenario optimizations described in this article. 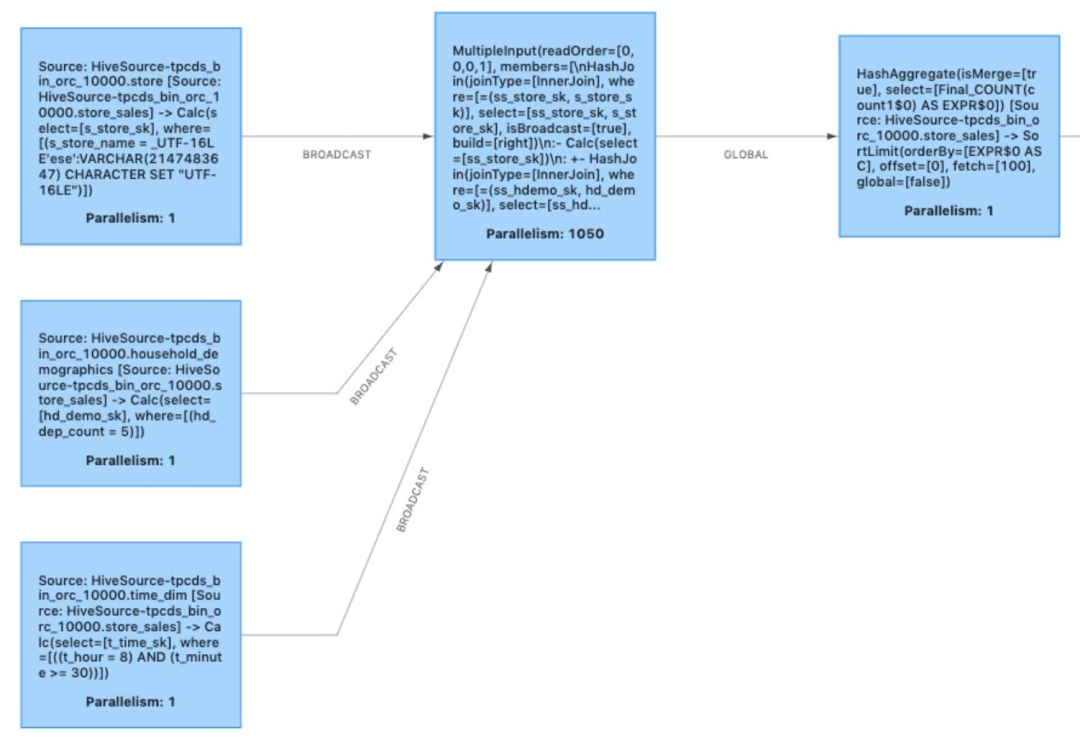 The multiple-input operator and source chaining are significantly effective on most tasks, especially on batch tasks. We use the TPC-DS test set to test the overall performance of Flink 1.12. Compared to 12,267s consumed by Flink 1.10, Flink 1.12 takes only 8,708s in total, with a shortened running time of nearly 30%.

What to Expect Next?

From the TPC-DS test results, we can observe that source chaining and multiple-input can significantly improve the performance. The overall framework has been completed, and the common batch operators support the deductive logic of redundant exchange elimination. More batch operators and more refined deductive algorithms will be supported in the future.

Although data shuffling in streaming tasks does not require writing data into disks as batch tasks do, the performance improvement brought by converting network transmission into memory transmission is impressive. Therefore, it is also worthy of expectation when streaming tasks support source chaining and multiple-input. At the same time, we have to do a lot of work to support this optimization on streaming tasks. For example, the deductive logic for redundant exchange elimination on streaming operators is not yet supported. Some operators need to be restructured to eliminate the binary data input requirement. This is why optimizations for streaming tasks are still unavailable. We will complete all this work step by step in future versions and hope that more people from the community will join us to implement more optimizations as soon as possible.