The E-MapReduce team of the computing platform division has explored and developed the JindoFS framework to accelerate data read/write performance in computing-storage separation scenarios. Mr. Yao Shunyang from Alibaba Cloud Intelligence team presented a detailed introduction to JindoFS storage policies and read/write optimization. Based on his introduction, this article further discusses the following topics:

JindoFS accelerates the data cache of storage end at the computing end in the computing-storage separation scenario. The following figure shows its architecture and its position in the system. JindoFS is consisted by the following components:

JindoFS is a cloud-native file system that supports the performance of local storage and the ultra-large capacity of OSS. It also supports the following types of backend storage:

There are two types of data write policies in JindoFS, as shown in the following figure. Write Policy 2: In terms of the pass-through, use the JindoFS SDK pass-through to upload data to the backend storage system. The SDK has made a lot of related performance optimizations. This method applies to the data production environment. It is only responsible for generating data and has no requirement for the subsequent computing process and read operations

The read policy is one of the most important parts of JindoFS. A distributed cache service is built based on the storage capability of JindoFS in the local cluster. Then, the remote data can be saved in the local cluster, and localized. By doing so, multiple data read requests are processed more quickly. This is the fastest way to read data in the cache with optimal read performances. According to this principle, the read policy is elaborated as follows: Similar to the Data Locality of HDFS, Cache Locality is a tool that pushes a task in the computing layer to the node where the data block is located for execution. Based on this policy, tasks first read the data in the local cache, which is the most efficient way to read data.

JindoFS Namespace maintains the location information of all cache data blocks. Therefore, through related APIs provided by the Namespace, the location information of data blocks can be delivered to the computing layer. Then, the computing layer pushes tasks to the node where the cache data block is located. In this way, most data can be read from the local cache and the rest of the data can be read through networks. Through Cache Locality, most data are read locally, ensuring an optimal data reading performance for computing jobs, as shown in the following figure. 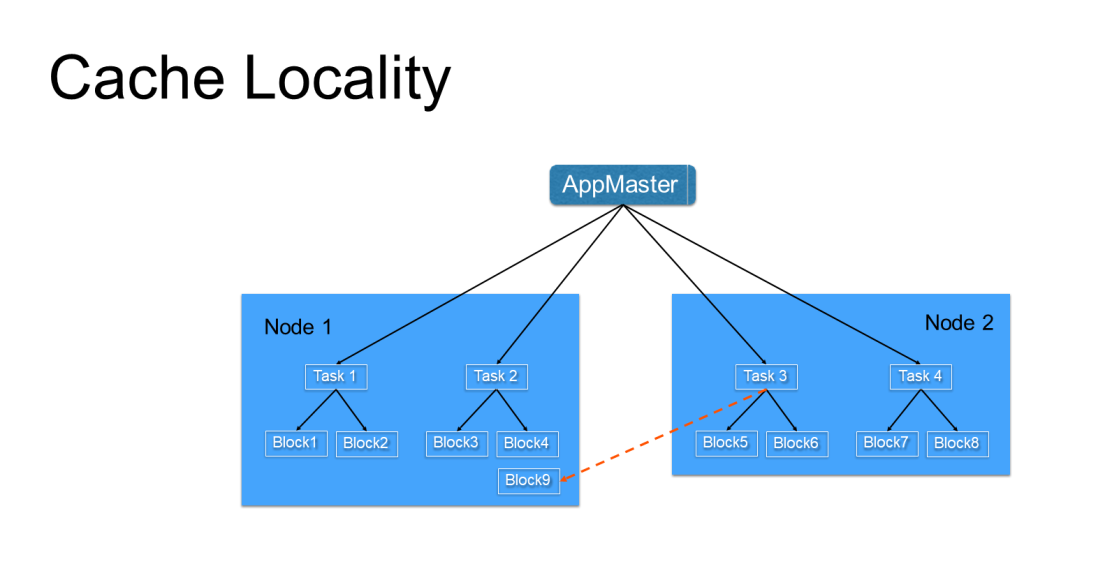 JindoFS is usually used in the following basic usage modes: As a cache system, JindoFS uses limited local cache resources to cache OSS backend which has almost unlimited space. Therefore, the main features of cache data management are as follows:

Currently, the automatic eviction of cold data blocks is performed based on the Least Recently Used (LRU) eviction policy, while the asynchronous cold data cleaning does not affect read/write operations.. How to Configure a Cluster