Definition, Architecture, and Principles of Flink

Apache Flink is a distributed processing engine for big data that performs stateful or stateless computations over both bound and unbound data streams. It's also deployed in various cluster environments for fast computations over data of different sizes.

To better understand Flink, you need to know basic Flink processing semantics such as Streams, State, and Time as well as APIs that provide significant flexibility and convenience.

The Flink architecture has the four following features: We will provide special courses on this topic later. This section only describes operations and maintenance (O&M) and service monitoring in Flink. The core application scenario of Data Pipelines is moving data and cleansing or processing a portion of the data during the move. On the left side of the entire architecture, the diagram is Periodic extract, transform, load (ETL,) which enables stream ETL or real-time ETL and allows you to subscribe to messages in the message queue and process them. After cleansing, write the data into the downstream database or file system in real-time.

While creating a data warehouse in the upstream, you may need real-time Stream ETL. During this process, data is cleansed or expanded in real-time. After data cleansing, it's written into the downstream real-time data warehouse This ensures the timeliness of data queries and real-time implementation of data collection, data processing, and querying in the downstream.

Take Taobao for example. When a seller releases a new item, a message stream is generated in the background. When passing the message into the Flink system, data is processed and expanded in real-time. Then a real-time index is built on the processed and expanded data before writing it into the search engine. Therefore, when a Taobao seller puts a new item on sale, search for that item is done through the search engine just a few seconds or minutes later. To a certain extent, all real-time data processing or stream processing is data-driven. Stream computing is essentially data-driven computing. A common Flink application scenario has to do with risk control systems. When a risk control system needs to process a variety of complex rules, data-driven computing allows writing rules and logic into APIs in a DataStream or ProcessFunction and then abstracting logic into the entire Flink engine. In traditional batch processing, time is the basis of creating different batches; you continuously collect data and then batch operations are performed periodically. However, consider a scenario where you need to count the number of event conversions per hour. In simple words, an endless data source continuously collects data and code serves as the basic logic for data processing; results are generated and returned after the data from the data source is processed by code. Assume that Input Streams have multiple users and each user has its ID. To calculate the occurrences of each user, transfer the occurrence events of the same user to the same operation code—this is similar to the Group By operation on other batch jobs. Therefore, like streams, it is also required to implement partitions, set the corresponding keys and flow the same keys to the same computation instance for the same operation. This is equivalent to state co-partitioned with the input stream by key. When partitions enter the stream, the cumulative state of the steam also becomes a co-partition. The second key point is the embedded local state backend.

When using a stateful distributed stream processing engine, the cumulative state becomes large over time. If there are too many keys, the state may exceed the memory load of a single node. At this point, a state backend must be available to maintain the state. If the backend works normally, in-memory maintains state by itself.

When we consider fault tolerance, we may think of exactly-once fault tolerance. Whether it is state accumulated, when applications perform computations, each input event reflects state or state changes. If there are multiple modifications, results generated from the data engine may be not reliable.

For example, if the number of occurrences of a user is not accurately calculated and does not have the exactly-once guarantee, the result is not reliable. Before considering precise fault-tolerance guarantees, let's consider some very simple use cases.

The state is accumulated for each completed computation. To ensure that the processor produces exactly-once fault tolerance, create a snapshot after each piece of data is processed post the state changes. The snapshot is included in the queue and compared with the corresponding state to ensure consistent snapshots, which ensure exactly-once guarantee. First, let's take a look at Checkpoints. As mentioned before, the local state backend of each Operator must maintain the state. After generating a checkpoint, it's transferred to the shared DFS every time. When one processor fails, recover the state of all the operation values from the three checkpoints and reset to the corresponding positions. Checkpoints allow processors to implement exactly-once in distributed environments. 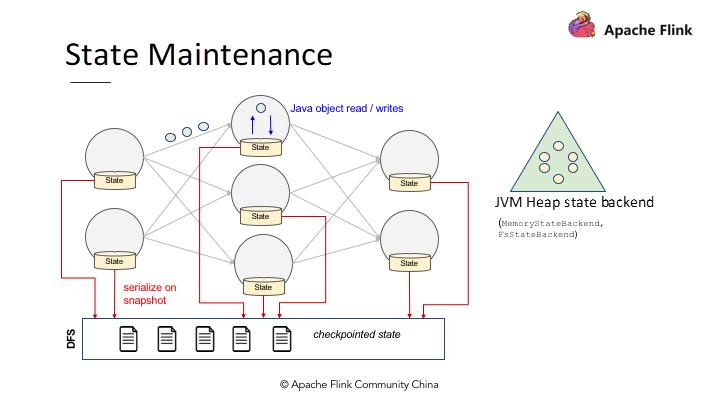 Before the emergence of Flink and other advanced stream processing engines, processing engines for big data only supported processing time. Assume there's a defined hourly event time window. For example, if running on processing time, data engines perform operations on the data received between 3 o'clock and 4 o'clock. When making reports or analyzing results, we want to know the output results of the data generated between 3 o'clock and 4 o'clock. To do this, use event time. As shown in the figure, event time is the time that each event occurred on its producing device and carried a timestamp, used for operations. An example of what event time processing does could be when the initial queue receives data and divides data into one batch every hour. 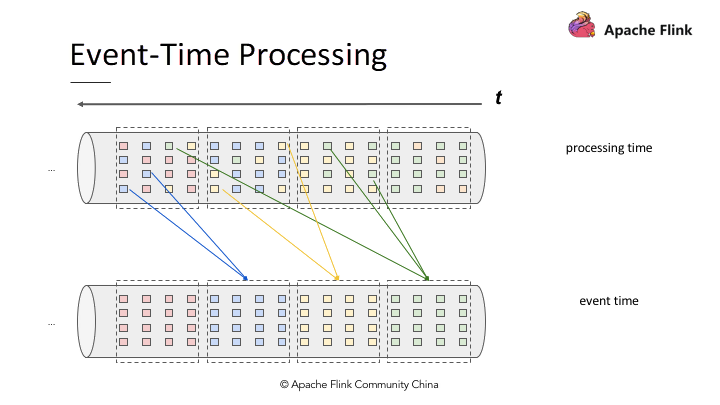 In event time, the time stamp for an event is used for re-bucketing. Put the data between 3 o'clock and 4 o'clock into the corresponding bucket for this time and then generate the results. Therefore, event time and processing time are two different concepts.

An important feature of the event, time is that it records the time when an engine returns the operation results. Stream engine runs and collects data around the clock. For example, a window operator is performing operations in a pipeline and results are generated every hour. In this case, the main role of event time is determining when to return the window operation values to indicate that the expected data is received. Flink implements event time based on watermarks. Watermarks are also a special event in Flink. The core principle of watermarks is that the Watermark(t) declares that event time has reached time t in that stream, so you're not receiving any more elements from the stream with a timestamp t.

Watermarks help to accurately estimate the end time for receiving data. For example, assume that the duration between the expected time of receiving data and returning time is delayed by five minutes.

Save and Migrate State

Since stream processing applications run all the time, we need to consider several important O&M factors.

Checkpoints perfectly answer the preceding questions. Additionally, Flink provides another term called Savepoint. A manually generated checkpoint is called a savepoint. Checkpoints are different from savepoints. Flink generates checkpoints continuously for a stateful application by using distributed snapshots. Savepoints record the state of all operators in a stream application. The preceding figure shows two savepoints: Savepoint A and Savepoint B. To change the underlying code logic, fix bugs, upgrade Flink versions or redefine applications or parallelism of computations, the first thing to do is produce Savepoints.

Manually inject Checkpoint barriers flow to all pipelines producing distributed snapshots, which are savepoints. Savepoints can be stored anywhere. After making the changes, Flink supports resuming and running directly from savepoints.

Assume that operations after recovery use Process event time and the window is an hour. Include all operation results in a single window within 10 minutes. However, if you've used the event time, the process is similar to the Bucketing operation. Bucketing ensures that the time of re-operations and the results in the window are consistent regardless of how many operations are to be performed.

This article covers the definition, architecture, and basic principles of Apache Flink and explains some basic concepts about stream computing for big data. Additionally, it provides a recap of the evolution of big data processing methods and principles of stateful stream processing.

Finally, from the perspective of challenges to stateful stream processing, we analyze the natural advantages of Apache Flink, one of the best stream computing engines worldwide. We hope that now you have a clear understanding of the basic concepts about stream processing engines for big data and find it easier to use Flink.