Notice When ACK repairs a node, it may perform operations such as node draining and system disk replacement. To avoid data loss, we recommend that you store data on data disks.
ACK determines whether to run auto repair tasks based on the status of nodes. To check the status of a node, run the kubectl describe node command and check the value of the condition field in the output. If a node remains in an abnormal state within a period of time that exceeds the threshold, ACK automatically runs repair tasks on the node. The following table describes the trigger conditions. 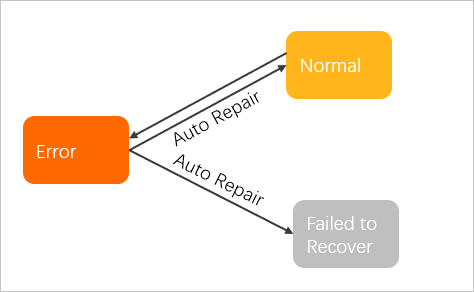 What do I do if ACK fails to repair a node?

If ACK fails to repair a node in a node pool, it disables auto repair for all nodes in the node pool until the node recovers from exceptions. In this case, Submit a ticket to apply to manually fix node exceptions.

How do I disable auto repair for a node?

To disable auto repair for a node in a node pool, add the following label to the node:
Previous: Overview Next: Work with managed node pools