Blog Events Webinars Tutorials Forum
Create Account Log In
×
Community Blog How to Install and Use Ansible on Ubuntu 16.04

40,486 0
Ansible is a free and open source configuration management system allowing you to deploy and manage your applications.

Ansible is a free and open source configuration management system that allows you to automatically deploy and centrally manage your applications. You can easily manage and control large numbers of servers from central location using Ansible. Ansible is a great alternative solution of Chef and Puppet because it has a much smaller overhead to get started. Ansible uses SSH channels to retrieve information from remote system, so you does not require any additional software to be installed on the client computers.

This tutorial will walk you through the step by step instruction of how to install and use Ansible on an Alibaba Cloud ECS Ubuntu 16.04 server.

First, Login to your https://ecs.console.aliyun.com/?spm=a3c0i.o25424en.a3.13.388d499ep38szx">Alibaba Cloud ECS Console. You will be redirected to the main dashboard. You will need to navigate to your ECS instance by selecting the appropriate region. For this tutorial, I have created my ECS instances in the Singapore region. 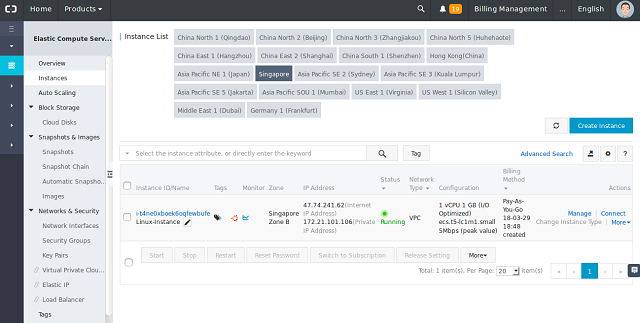 If you haven't created an instance, you can check out this tutorial or follow the steps on this quick start guide. You will need to have two running ECS instances, preferably on the same region.

Note that I have set up my ECS instances with SSH key pairs as credential. This allows me to connect to the instances using SSH.

By default, Ansible is not available in Ubuntu 16.04 repository. So you will need to add Ansible personal repository to on the server node. You can add the repository using the following command:

Once the repository is updated, install Ansible with the following command:

Ansible keeps track of all of the server nodes and client nodes using a hosts file. So you will need to configure this file before communicate with our other nodes.

First, open the file with the following command:

You should see all the commented lines. Here, you will need to add all the client nodes which you want to manage as shown below:

Save and close the file when you are finished.

Ansible uses SSH to communicate with other nodes. So you will need to generate an SSH key on server node and copy the ssh keys to the client node.

On the server node, run the following command to create an SSH key:

Next, copy the created key to the client node with the following command:

You should not be prompted for a password if you have set this up correctly.

Once everything is configured properly, it's time to test Ansible.

First, run the following command to ping all the client node which you have specified in hosts file:

If your client node is up, then you should see the following output:

Note: "all" means if you have specify multiple host in hosts file then the above command execute ping command on all the hosts.

You can also execute ping command on single host or group of hosts with the following command:

If you want to find out the memory usage on client node, run the following command:

To check the partition size of the client node, run the following command:

Congratulations! You have successfully configured Ansible on your Alibaba Cloud ECS server. You can now easily manage multiple server by executing single command from central location.