19,776 1
In this article, we introduce the data distribution and explain some new optimization measures in Alibaba Cloud MaxCompute.

Obviously, when deploying a Shared Nothing database, you need to carefully consider data distribution. You first need to know how to distribute data across different physical nodes (since this database doesn’t place data into unified storage unlike the Shared Disk system) to reduce the demands of future operations. For example, in Greenplum, one has to define a partition key when building a table, after which the system will distribute data according to key (hash). If we partition the two tables in a Join operation according to join key, then the Join operation will not require network IO. If one of the involved tables uses a different group of partition keys, then a re-partitioning operation may be necessary.

This is precisely why we need to understand the principle behind data distribution, as it can be critical to the application and system optimization. There is a significant amount of information available concerning data distribution on MPP DBMS. But why don’t these kinds of optimizations exist for data processing systems like Hadoop? Simply put, it’s because then we need stronger expandability (and support for unstructured data, but we won’t go into that).

The difference is that MPP and Hadoop don’t place data and computing on the same node. Even if we were to do so, it would limit the system expandability. Dynamic expandability especially suffers. Take into consideration a group of 50 currently operating Greenplum clusters. It would be nearly impossible to quickly add, for example, two new nodes and still maintain efficient operation. Hadoop is very good at this, the main solution being:

This is why, when you create a table in Hive, you don't need to define a partition key like in Greenplum. Also, this explains why Join operations are less efficient in Hive than they are in Greenplum.

The Goal of Data Distribution Optimization

The following are examples of data distribution types and their meanings:

Consider the below query:

At this point, if Join becomes a Sorted Merge Join, it may deliver a Hash[uid] property, which is required by Aggregate, then we can skip an unnecessary round of redistribution.

If we want to apply a similar optimization, then we need to take into consideration the below issues:

There are three ways to generate data distribution:

The complexity leaves more room for finding the most optimal method. In reality, finding the most optimal method is a question of the NPC of the number of relational algebra numbers. To reduce the space that under the search, we use a heuristic branch selection algorithm. When compiling a relational algebra, we not only need to satisfy the needs of subsequent operations, we also need to think about the probability that prior operations will be able to produce satisfactory distribution. To realize the latter, one can use a module called Pulled Up Property. 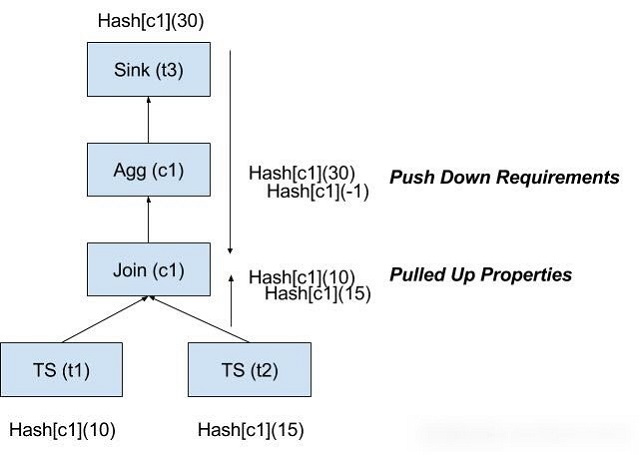 Pulled Up Property guesses and screens for possible preliminary delivered properties that we can use to narrow down searches during compilation. Consider the query in the above image. When compiling Join, because Sink requires a push-down operation, it needs to provide a Hash[c1](30). Pulled Up Property then guesses that prior operations will possibly provide Hash[c1](10) and Hash[c1](15). Considering that Join will directly require Hash[c1](30), it then reduces the Hash[c1](10) and Hash[c1](15) branches.

These avoid these situations we need better statistical information. When an optimization plan encounters Data Skew or Under Partitioning, we need to apply the proper penalty to its cost estimation, decreasing its selection likelihood in the future. We define “good” distribution as one where the amount of data processed by each node falls within a certain pre-defined range. If data processing for a single node is lower or higher than this range, then it should penalize the distribution. Factors that go into estimating this data volume include:

Looking at our tests, the effects of the optimization are undeniable. After applying to appropriate partitioning to TPC-H, we see that overall performance increasing by order of 20%. Even if do not partition the data on the table, partition optimization while running transparently to the user is very effective. When running in an online environment, 14% of queries were able to skip a step of redistribution because of these optimizations.

The "shared" story has been vacillating from CPU, disk....:) . Snowflake shared data seems to bring life once but there are catches....