25,762 0
How Can Medium-sized and Small Enterprises make clever use of container technology, sharing the company's experiences, issues and lessons learnt durin...

During the 18th TechDay of The Computing Conference, Qi Jun, CTO of Router Software Company Limited from Nanjing, made a presentation titled How Can Medium-sized and Small Enterprises Make Clever Use of Container Technology, sharing the company's experiences, issues and lessons learnt during its use of Alibaba Cloud container services and Docker. Focusing on the impact of container technology on business production and the overall productivity, the presentation is of significant reference to medium-sized and small enterprises.

The following is a summary of the shared points of view at the activity. First, let's take a look at the first dilemma:

There are too many or overlapping sub-products in the product line, leading to numerous repeated basic services, such as e-mail services and SMS services. But in development stage, they cannot be split.

The second dilemma is the O&M. At present, there are a total of 40 servers in the company and a bunch of services, but only one full-time O&M personnel.

The third dilemma is the core issue: Extremely low efficiency in deliveries of products/services, giving rise to a serious waste of human resources.

The fourth dilemma is being unable to effectively manage load peaks and valleys for reasonable resource allocation.

The fifth dilemma is the demanding requirements of the company on reliability and security. Every day, hundreds of media rely on our products for their publication and production. If we cannot improve business reliability, a problem means the loss of an issue of a newspaper or an episode of a TV program in a region. The above figure illustrates the old architecture of the company, and every line is identical. A heap of clients visit a public IP address behind which may be an ECS server. On the ECS server, one or more applications may be deployed, and these applications are connected to Alibaba Cloud database services, or cache or log services. All of these constitute the minimum unit. During peak hours, there may be up to 60 minimum units in the company, involving  nearly 80 ECS servers, leading to upgrading and maintenance issues. But this approach has to be abandoned. Because once the code is released, you have to negotiate a time with the client for upgrading. But clients deploy their systems independently, and it is impossible to agree on a uniform upgrading time for all clients. In the current architecture, users access through the internet, first by way of the SLB (load balancing forwarder) which can be understood as an official website IP address that accesses its back-end servers through the official IP addresses provided by SLB; in the back-end server, we have a VPC network which houses around 20-30 ECS servers. The 20-30 ECS servers constitute the present four major clusters in use. The container cluster needs to have several container instances to run after the cluster is created. Reliability, cost and agility are three core issues. Agility refers to agile development and deployment; cost is a shared concern of the boss and the CTO; and reliability secures our survival. 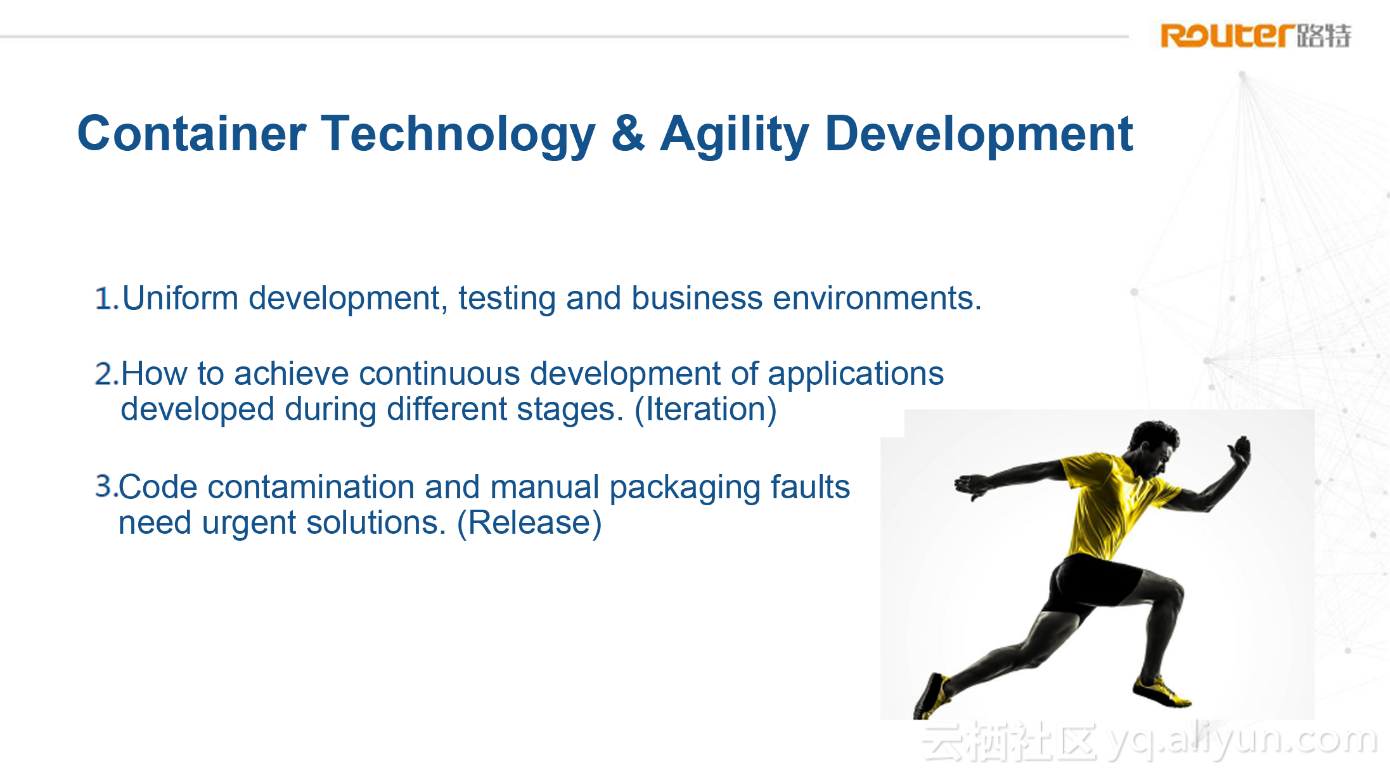 For this issue, our solution is to encapsulate and package all the basic environments in the image warehouse. New employees only need to download the image, and put his/her own code into the image during local debugging and development. Although read-only during the process, the image is actually connectible with data on external disks. In addition, the developed and debugged code won't suffer problems, because all the images are consistent and are operating-system-independent.

Second, how can we achieve continuous development of applications developed during different stages. This is a pain point for development teams of many medium-sized and small enterprises. New employees are reluctant to maintain and fix issues in the old code.

For such problems, we can further break down the application: several items of a big application can be separated to small applications, slashing the cost for maintenance. During continuous development, these small applications do not require re-writing and you can focus on the necessary tasks.

Currently, we adopt Git auto build to solve the problem, because it gets code from Git. When we push a branch, an image will be automatically created, in which case code contamination and manual packaging faults are unlikely to happen.

Next, let's take a look at the relationship between container technology and business costs. At present, there are several cost problems as follows: 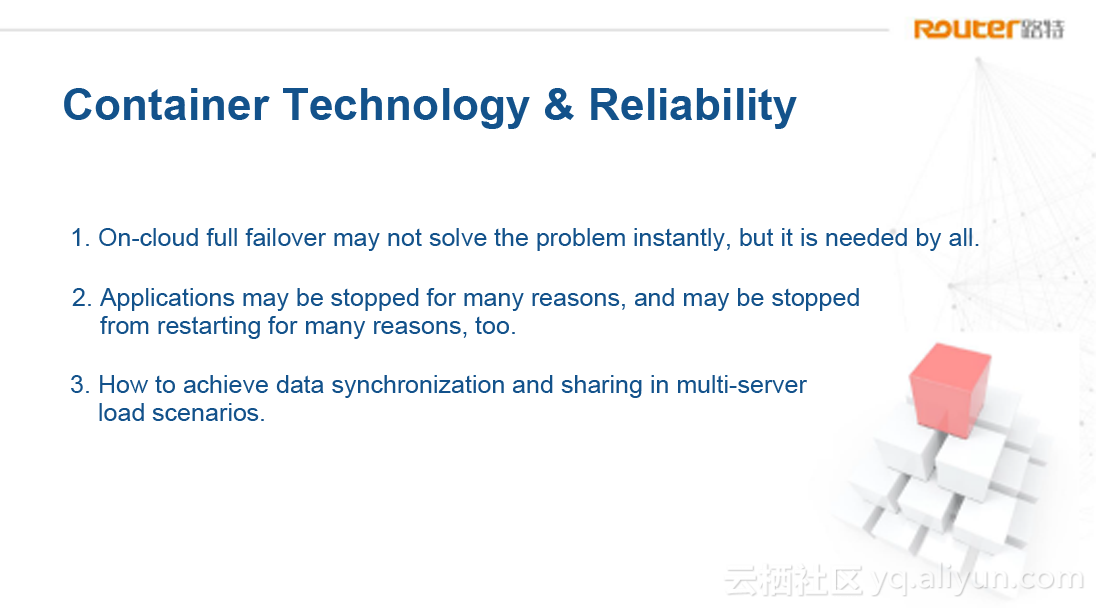 Now let's talk about container technology and reliability. One truth about reliability is that on-cloud full failover may not solve the problem instantly, but it is needed by all. On the cloud, many of us may have overlooked the hot backup issue, thinking hardware faults are not likely to happen on the cloud. But the truth is the other way round. Alibaba's container service can be configured through arguments. When a cluster fails, you can manage to put the container into another cluster. Although there are no perfect solutions for domain name or port configurations, and manual adjustments are required, it is great progress.

Data synchronization and sharing in multi-server load scenarios. The appendixes of some old services cannot be separated in case of poor coupling, or some concentrated reads or writes may exist. In such cases, shared storage should be used to solve this issue. At present, we solve this problem through the two solutions provided by the container service: first, the OSS data volume, and the other is NSA data volume. Both can support access from multiple containers to the same file data source, as well as real-time concentrated writes and reads.

The traps we once fell into 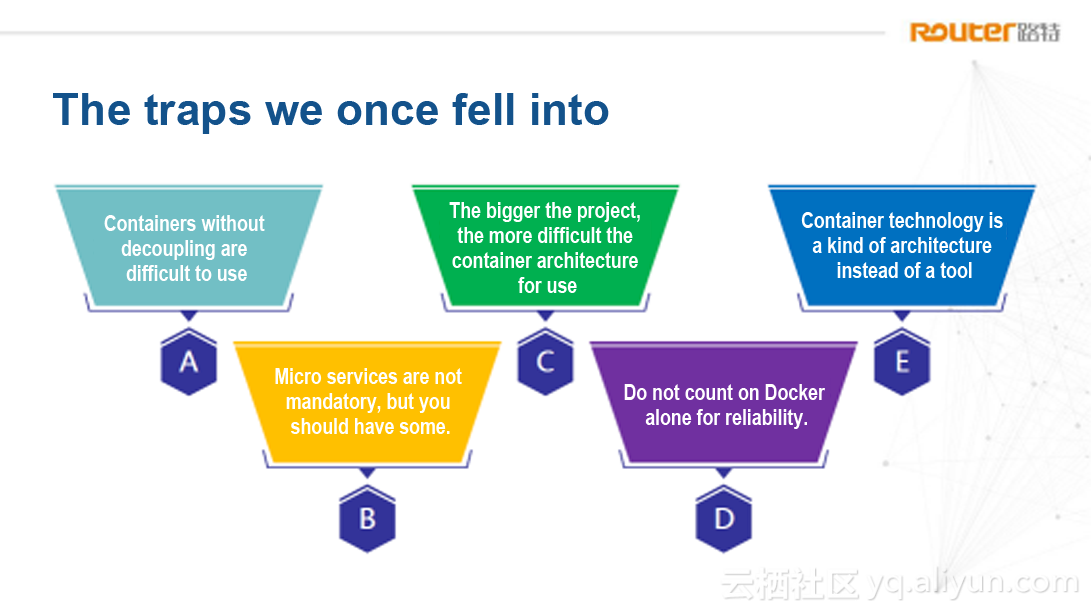 Now I want to summarize the lessons I learnt over the years, in a hope they can be of some help to you:

First, containers without decoupling are difficult to use. This is much in evidence. Because if the container has a bunch of applications with high relevance, once the container goes wrong, the applications will fail and the whole business system may even collapse. For this reason alone, we need to decouple applications, which is very important.

Third, the bigger the project, the more difficult the container architecture for use. A great majority of our projects are currently hosted in container services, but not all of them. Some products are too big to be placed in a container service. This involves the internal management, as well as the product or business scenario and user requests. The bigger the project, the wider the scope, and the harder to impose a sweeping approach on it, that is, placing the project into a container cluster.

Fourth, reliability. Do not count on Docker alone to solve all the reliability issues. Docker and container technology, in my opinion, are both a kind of architecture instead of a tool. Reliability is related with a lot of elements, from the network environment and the overall architecture layer, to the quality of developers. These elements are beyond the control of Docker.

Finally, container technology is only a kind of architecture. Running Docker on a single service is an experiment. Only when it drives the operation of a cluster can it truly give play to its power. The first scenario is efficient API cluster. Sometimes we can encounter such circumstances that some APIs in the company are for external use, and some others are not, but the API can be used by the company APP and the APP may access the API through the official approach, and the API can be called by internal services at the same time. But the issue is: when an external domain name visits it, there are no problems. But when an intranet domain name does so, DNS is required and some official traffic may be even consumed for the visit. As a matter of fact, the server called through intranet may be very close to the API server.

In such circumstances, we can solve the problem using a model: when an internal server initiates the call, use the intranet SLB (Alibaba's intranet SLB is free of charge); when an external server initiates the call, use the internet SLB (traffic charges only, if I recall it right); the two container clusters (container clusters are Alibaba's container services) connected to the API respectively are correctly configured internally. One advantage of this is: when this service is used in a concentrated way, you can make choices at will. On-cloud calls can be completed through intranet SLB; and external calls can be completed through internet SLB, facilitating a maximum and most reliable access efficiency. Regarding internet access, the response may be around 10 milliseconds, while the figure for intranet access may be around 1 to 2 milliseconds. Simply put: in the past year, from pains and the verge of giving up to the flush of dawn, and to the bumps along the way, we should thank all the media clients and Alibaba for their constant support.

The Secret to Success on IoT for Business

Beyond Bitcoins - How Blockchain Technology Can Transform Businesses