You can bind instances of multiple compute engines such as MaxCompute, E-MapReduce (EMR), and Realtime Compute to a single workspace. After you bind a compute engine instance to a workspace, you can configure and schedule the corresponding type of nodes in the workspace.

You can include one or more workflows in a solution.

Solutions have the following benefits:

SQL script templates are general logic chunks that are abstracted from SQL scripts. They can help reuse code.

Each type of node is used to perform a specific data operation. Examples: An instance is a snapshot of a node at a specific point in time. An instance is generated every time a node is run as scheduled by the scheduling system or is manually triggered. An instance contains information such as the time at which the node is run, the running status of the node, and operational logs.

Assume that Node 1 is scheduled to run at 02:00 every day. The scheduling system automatically generates an instance of Node 1 at 23:30 every day based on the time that is defined for the auto triggered node. At 02:00 the next day, if the scheduling system verifies that all the ancestor instances are run, the system automatically runs the instance of Node 1.
Note You can query the instance information on the Operation Center > Cycle Instance page.

A script stores code for data analysis. The code in a script can be used only for data query and analysis. It cannot be committed to the scheduling system for scheduling.

Resources and functions are concepts in MaxCompute. For more information, see Resource and Function.

The DataWorks console allows you to manage resources and functions. If resources or functions are uploaded by using other services such as MaxCompute, you cannot query them in DataWorks.

Each node has an output name. When you configure dependencies under an Alibaba account, the output name of a node is used to connect to its descendant nodes. 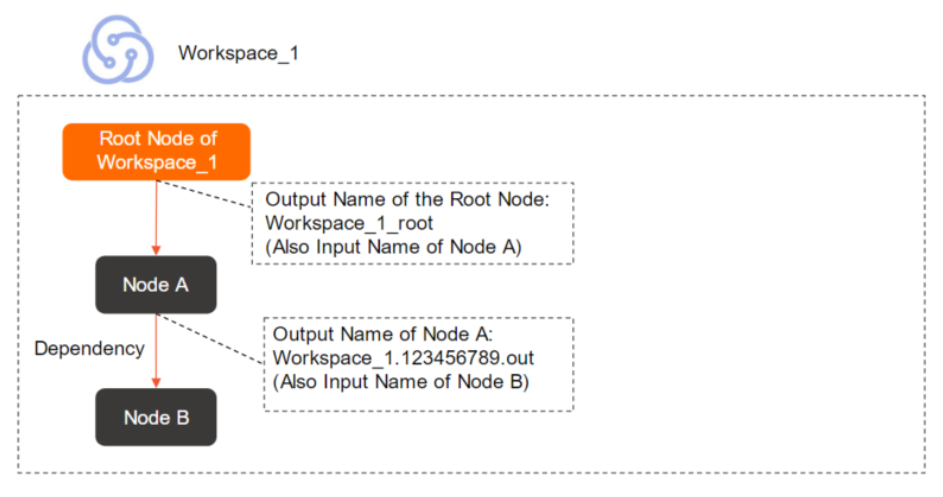 Metadata is data that provides descriptions for other data. It can describe the attributes such as the name, size, and data type, or the structure including the field, type, and length, or relevant information such as the location, owner, output node, and access permission. In DataWorks, metadata refers to information about tables or databases. Data Map is the main application for metadata management.

After an auto triggered node is developed, committed, and deployed to the scheduling system, the system runs the node as scheduled. If you want to perform computing on historical data in a time period, you can generate retroactive data for the node. The generated retroactive instance is run based on the specified data timestamp.

Previous: What is DataWorks? Next: Scenarios