This topic describes the features of MongoDB 4.4. Alibaba Cloud is an official strategic partner of MongoDB and the first cloud provider to introduce MongoDB 4.4 in its service. It released ApsaraDB for MongoDB V4.4 on November 2020. MongoDB 4.4 was officially released on July 30, 2020. Compared with previous major versions, MongoDB 4.4 is a fully enhanced version that addresses main issues of previous versions that attract user attention.

Although a large number of indexes degrade write performance, complex data makes it difficult for O&M engineers to delete potentially ineffective indexes. If effective indexes are deleted by accident, jitter may occur. Furthermore, the cost to recreate the accidentally deleted indexes is high.

To solve these problems, Alibaba Cloud and MongoDB jointly developed the hidden index feature as strategic partners. For more information, see the ApsaraDB for MongoDB product page. This feature allows you to use the collMod command to hide indexes. Hidden indexes are not used in subsequent queries. If hidden indexes do not cause errors, the indexes can be deleted.

Hidden indexes are invisible only to the query planner of MongoDB. The indexes retain some index features such as unique index constraint and time to live (TTL) expiration.

Note Hidden indexes become active immediately after you unhide them because indexes continue to be updated when they are hidden.

In MongoDB 4.0 and earlier, the shard key for a collection and the shard key value are immutable. In MongoDB 4.2 and later, you can change the shard key value. However, to change the shard key value, you must migrate data across shards based on distributed transactions. This mechanism has high performance overheads and is unable to prevent jumbo chunks and query hotpots. For example, if you use the {customer_id:1} shard key to shard an order collection, the shard key is sufficient in the early stage of an enterprise because the number of orders placed by each customer is small. However, as the enterprise develops, if a major customer places more and more orders, frequent queries are made to the order collection and single-shard query hotspots may occur. An order has close relationships with the customer_id field, uneven queries cannot be solved by changing the customer_id field.

In this case, you can use the refineCollectionShardKey command that is provided by MongoDB 4.4 to add one or more suffix fields to the existing shard key. This way, a more fine-grained data distribution is used for documents and jumbo chunks are prevented. For example, you can use the refineCollectionShardKey command to change the shard key to {customer_id:1, order_id:1}. This way, singe-shard query hotspots can be prevented.

The refineCollectionShardKey command has low performance overheads because this command modifies only the metadata on the config server node and does not migrate data. Data is gradually distributed when chunks are split or migrated to other shards. A shard key must be supported by an index. You must create an index that supports the new shard key before you run the refineCollectionShardKey command.

Versions earlier than MongoDB 4.4 do not support compound hashed indexes. You can specify only the hash key with a single field. This may lead to uneven data distribution in collections across data shards.

MongoDB 4.4 supports compound hashed indexes. You can specify a single hashed field in compound indexes as the prefix or suffix field.

You can take full advantage of compound hashed indexes in the following scenarios:

Network latencies may cause economic loss. A report from Google suggests that if a page takes more than 3 seconds to load, over half of visitors leave the page. For more information about the report, visit 7 Page Speed Stats Every Marketer Should Know. To minimize network latencies, MongoDB 4.4 provides the hedged read feature. In sharded clusters, the mongos nodes route a read operation to two replica set members per queried shard and return results from the first respondent per shard to the client. This way, P95 and P99 latencies are reduced. P95 and P99 latencies indicate that average latencies for the slowest 5% and 1% of requests over the last 10 seconds are within the limits.

The support of mongos nodes for the hedged read feature must also be enabled. To enable the support, you must set the readHedgingMode parameter to on.

The indexes can be used only when a majority of voting nodes finish creating the indexes. This can reduce performance differences that are caused by different indexes in read/write splitting scenarios.

One common phenomenon in ApsaraDB for MongoDB is that most users who purchase three-node replica set instances perform read and write operations only on the primary node, while the secondary node does not process read traffic. In this case, occasional failover causes noticeable access latency and access speed can be restored to normal only after a period of time. The access latency happens because the elected primary node is processing read traffic for the first time. The elected primary node does not acknowledge the characteristics of the frequently accessed data and has no correspondent cache. After the elected primary node processes read traffic, read operations encounter a large amount of cache misses and data must be reloaded from disks. This results in increased access latency. This problem is obvious to instances that have large memory capacities.

You can specify the mirrored read rate by using the mirrorReads parameter. The default rate is 1%.

You can also use the db.serverStatus( { mirroredReads: 1 } ) command to collect statistics of mirrored reads. Syntax:

In versions earlier than MongoDB 4.4, a secondary database must restart the entire initial full synchronization process if network interruptions occur. This significantly affects workloads if you have a large volume of data.

If the network encounters a non-transient connection error, a secondary database must restart the entire initial full synchronization process.

In MongoDB, the oplog collection records all operations that modify the data in your database. The oplog collection is a vital infrastructure that can be used for replication, incremental backup, data migration, and data subscription.

You can also specify different stages in the pipeline parameter to filter data based on specified collections before aggregation. This method is flexible to use. For example, assume that you need to store order data of a business in different collections by table. Syntax:

To execute complex queries in versions earlier than MongoDB 4.4, you can use the $where operator in the find command. Alternatively, you can run a JavaScript file on the server by using the MapReduce command. However, these methods cannot use the aggregation pipeline.

In MongoDB 4.4, you can use the setDefaultRWConcern command to specify the global default readConcern and writeConcern settings. Syntax:

You can also use the getDefaultRWConcern command to obtain the current global default settings for the readConcern and writeConcern parameters.

MongoDB Shell is one of the most common DevOps tools in MongoDB. In MongoDB 4.4, a new version of MongoDB Shell provides enhanced usability features, such as syntax highlighting, command autocomplete, and easy-to-read error messages. The new version is available in beta. More commands are being developed. We recommend that you use the new MongoDB Shell only for trial purposes. 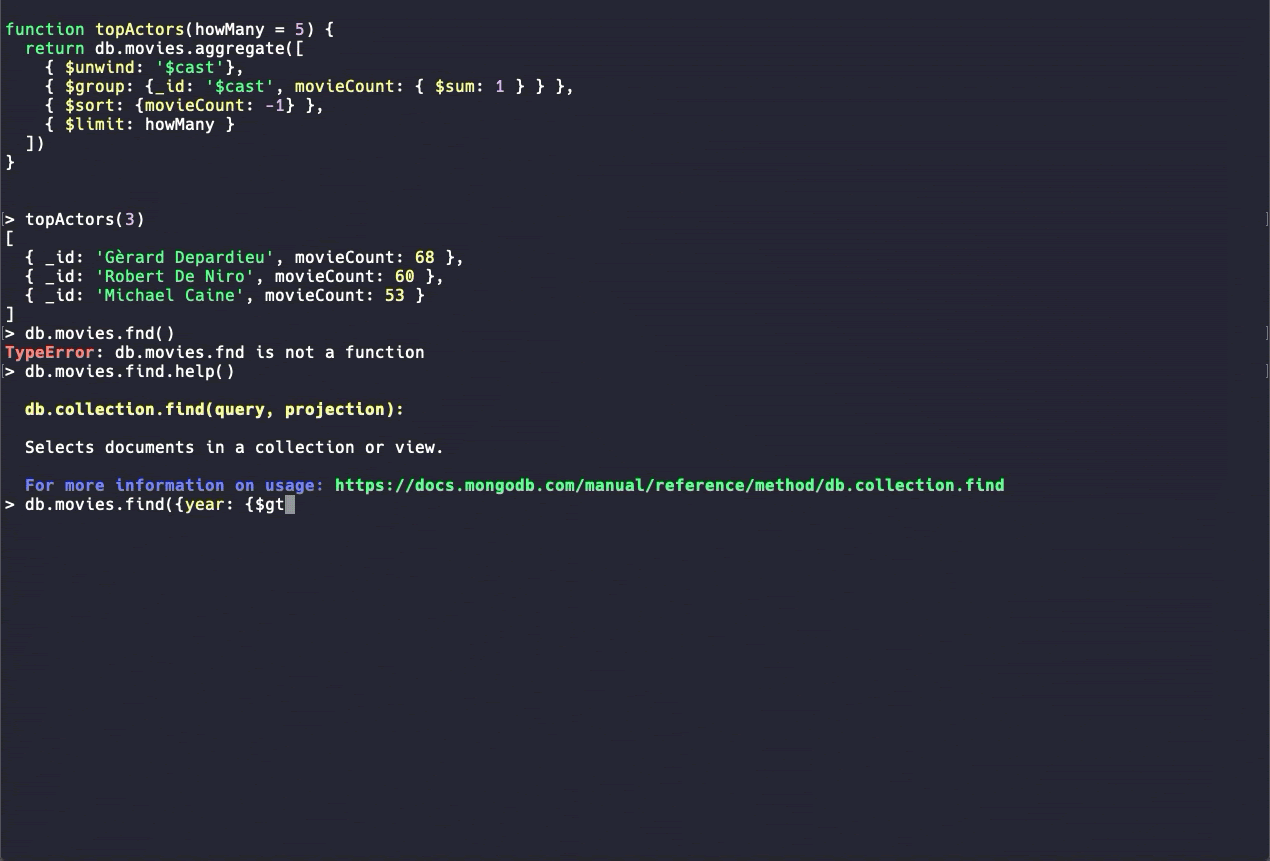 MongoDB 4.4 is a maintenance release. In addition to the preceding main features, general improvements are provided, such as the optimization of the $indexStats aggregation operator, support for TCP Fast Open (TFO) connections, and optimization of index deletion. Some large enhancements are also available, such as structured logs (logv2) and new authentication mechanism for security. For more information, visit Release Notes for MongoDB 4.4.