This topic describes how to create and publish an API operation with a resource in a VPC as the backend service in API Gateway, and how to call the API operation in an app by using an AppCode. The AppCode is automatically generated for the app when you set the authentication method of the API operation to Alibaba Cloud App.

1. Create instances in a VPC.

In the left-side navigation pane of the API Gateway console, choose Open API > VPCs. On the VPC Access Authorizations page, select the region where the VPC resides and click Create Authorization. In the Create VPC Access dialog box, specify VPC Access Name, VPC Id, Instance ID or IP Address, and Port Number. If you need to specify a domain name to access a vhost on an SLB instance or ECS instance, you can specify the domain name as Host. 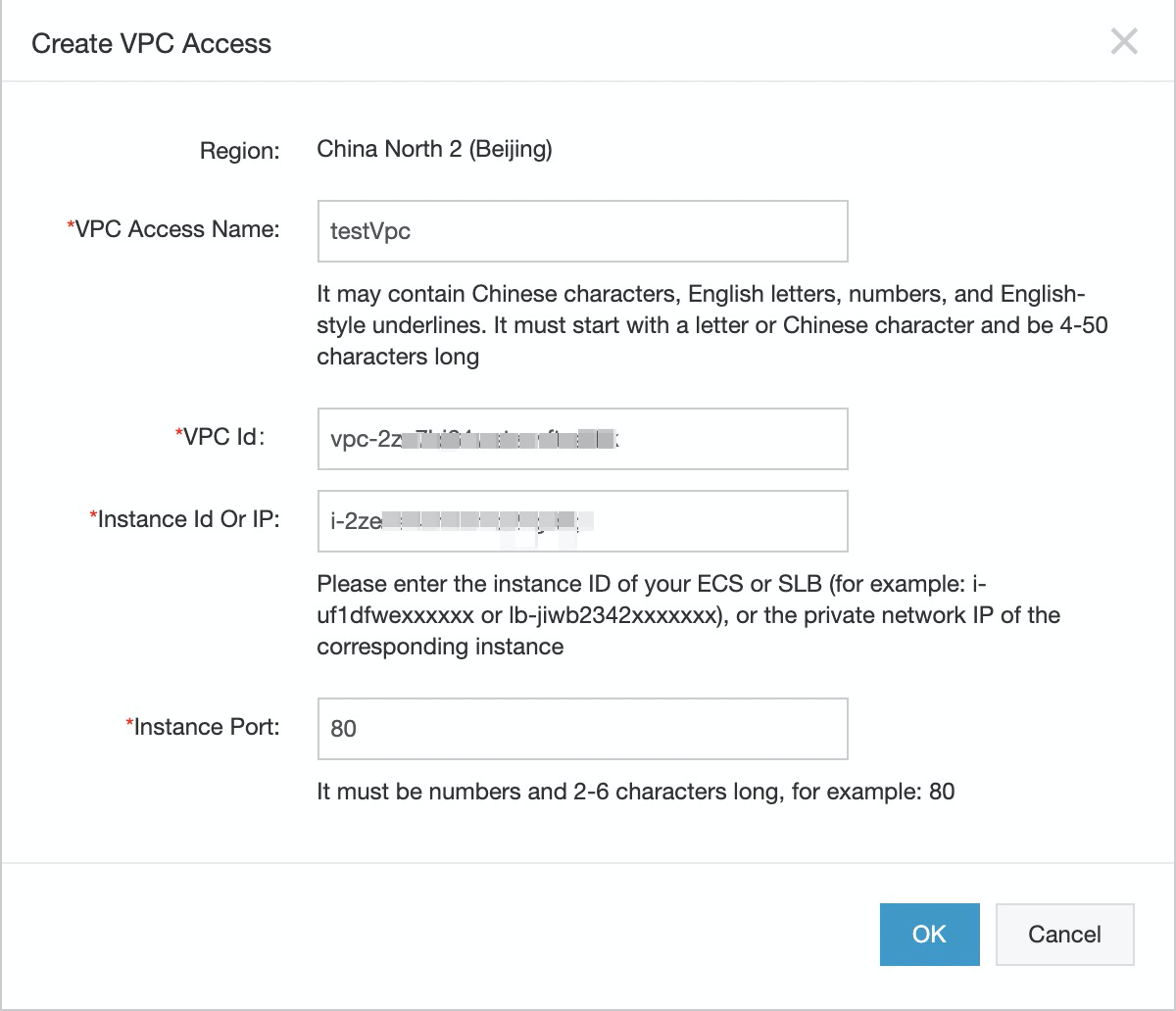 Log on to the API Gateway console. In the left-side navigation pane, choose Open API > API Groups. Select a region in the top navigation bar and click Create Group on the API Groups page. In the Create Group dialog box, select the instance to which the API group to be created belongs and enter the group name. In this example, set Instances to Shared Instance(VPC Network)(api-shared-vpc-002) and Group Name to testVpcGroup. 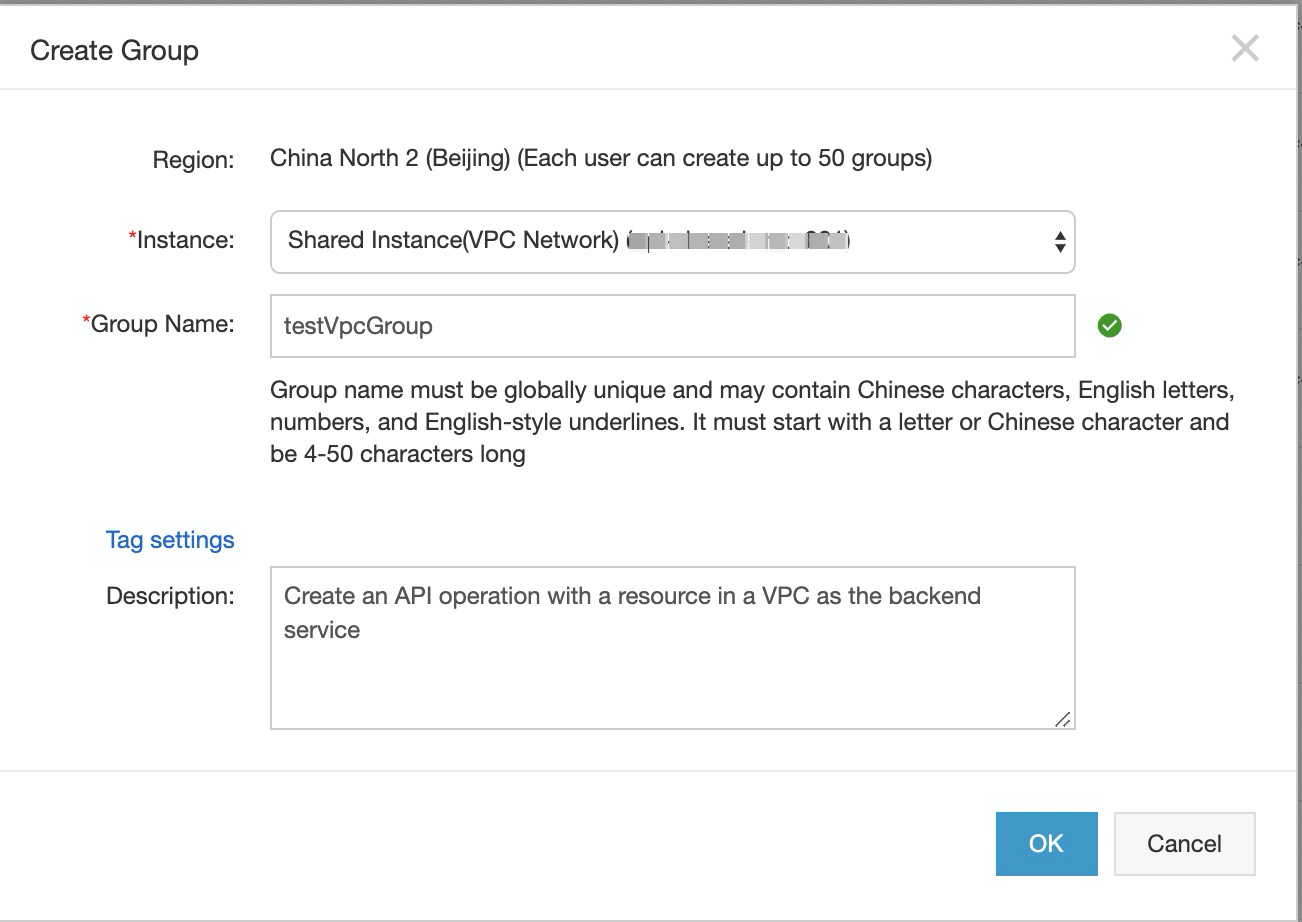 In the left-side navigation pane, choose Open API > APIs. Make sure that the current region is the region where the API group you created resides. On the APIs page, click Create API.

In this step, configure basic information for the API to be created, including the API group to which the API operation belongs, the name, authentication method, type, and description of the API operation. In this example, set Group to testVpcGroup, AppCode Certification to Enable AppCode Authentication (Header & Query). Set other parameters as required and click Next.

In this step, define how a client, such as a browser, a mobile app, or a business system, calls the API operation. The parameters that you need to specify in this step include Request Type, Protocol, Request Path, HTTP Method, Request Mode, and the parameters in the Request Parameters section. Then, click Next. In this example, set Request Mode to Request Parameter Passthrough, which indicates that API Gateway passes API requests to the backend service in the VPC without processing them.

In this step, configure the type and URL of the backend service to which API Gateway sends the requests received from a client and how parameters are mapped and processed. In this example, specify VPC for Backend Service Type, enter the VPC access authorization name you created in the "Authorize API Gateway to access the VPC" section in VPC Access Name, specify Backend Request Path, and then click Next.

5. Create and authorize an app

In the left-side navigation pane, choose Call API > Apps. On the Apps page, click Create App. In the Create App dialog box, enter an App name and click Confirm. In the app list, click the name of the created APP. Two authentication modes are provided: an AppKey and AppSecret pair and AppCode. In this example, the AppCode mode is used to authenticate the app. For more information, see Call an API operation by using an AppCode.

In the left-side navigation pane, choose Open API > APIs. On the APIs page, find the API operation you created and click Authorize in the Actions column. A dialog box appears, as shown in the following figure. Set the Environment parameter to the environment to which you have published the API operation. In this example, set this parameter to Release. Enter the name of the app you created in the search bar of the Choose Apps for Authorization section. In the search result, select the created app, click Add in the Actions column, and then click Confirm. A message appears to inform you that the app is authorized to call the API operation. 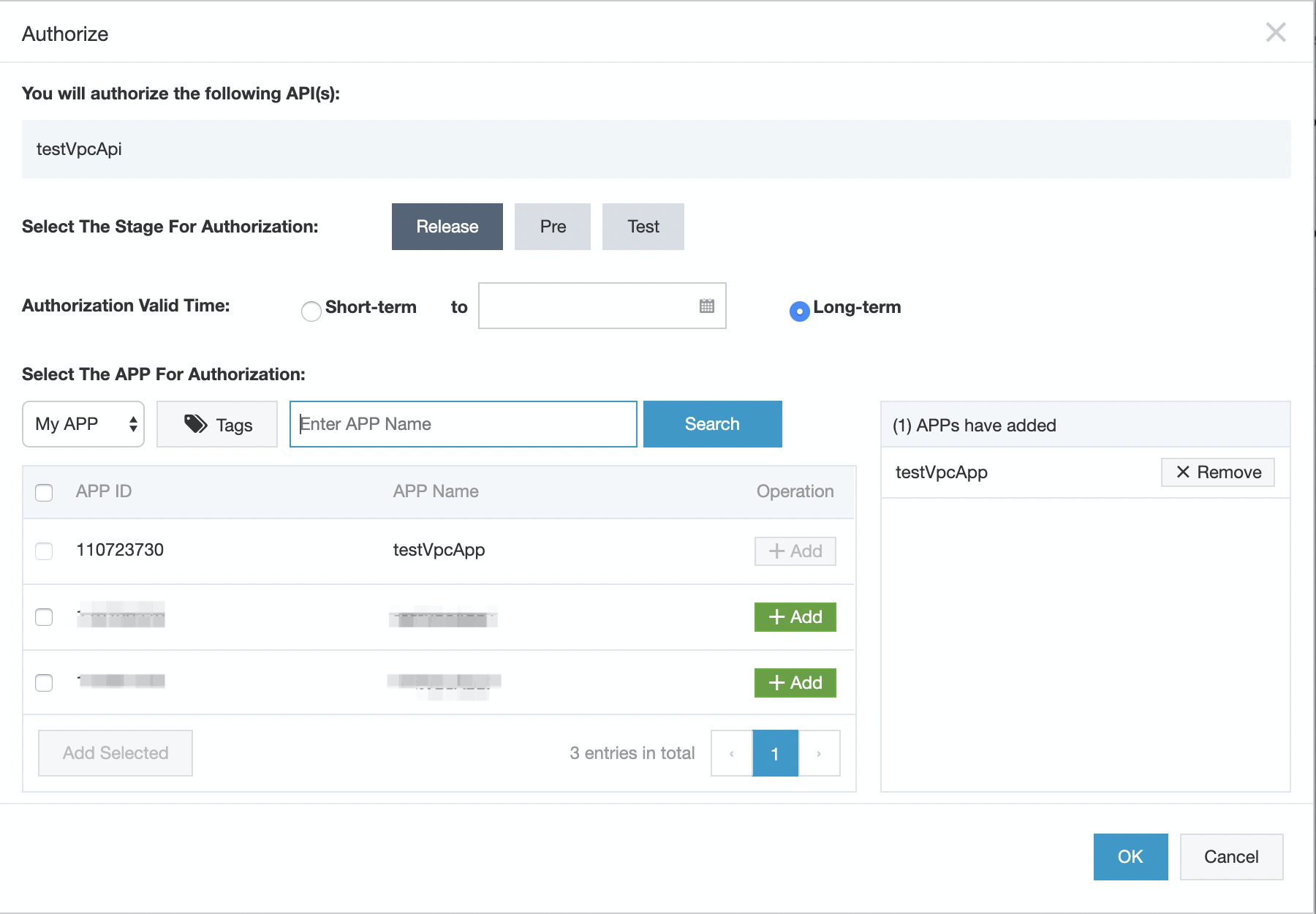 API Gateway supports online debugging. We recommend that you use this feature to check whether an API operation is correctly configured before you call this API operation on clients.

In this example, curl is used to call the API operation. For more information, see Call an API operation by using an AppCode.

Note: The API operation in the production environment is called by default.

For information about the environments, see Configure different environments for an API operation.

The main purpose of this topic is to help you quickly get started. The high availability of a backend service is not considered. If you have any questions, see Use a resource in a VPC as the backend service of an API operation.