MaxCompute Graph is a processing framework designed for iterative graph computing. MaxCompute Graph jobs use graphs to build models. Graphs are composed of vertices and edges, which contain values.

MaxCompute Graph supports the following graph editing operations:
Note When editing a vertex and an edge, you must maintain their relationship.

During graph computing analysis, use custom GraphLoader to convert two-dimensional table data to vertices and edges in the MaxCompute Graph engine. You can determine how to resolve graph data into two-dimensional tables based on your service scenarios. In the sample code, the table formats correspond to different graph data structures.

The vertex structure can be described as < ID, Value, Halted, Edges >, which respectively indicates the vertex ID (ID), value (Value), status (Halted, indicating whether an iteration needs to be stopped), and edge set (Edges, indicating lists of all edges starting from the vertex). The edge structure is described as < DestVertexID, Value >, which respectively indicates the destination vertex (DestVertexID) and value (Value). 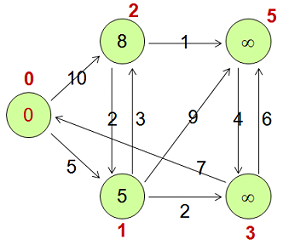 For example, the preceding figure consists of the following vertices:

The framework calls custom GraphLoader and resolves records of an input table to vertices or edges.

Distributed architecture: The framework calls custom Partitioner to partition vertices and distributes them to corresponding Workers. (Default partitioning logic: Calculates the hash value of a vertex ID and performs the modulo operation on the number of Workers.) 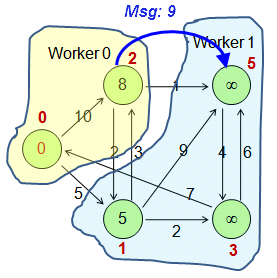 If any of the following conditions are met, iteration is terminated.

The pseudocode is as follows:
Previous: FAQs Next: Aggregator