875 0
This article is a transcript of Yong Yang's speech from the 2022 Apsara Conference Anolis Operating System session.

At the recent 2022 Apsara Conference Anolis Operating System session, Yong Yang (Chairman of OpenAnolis Technical Committee and Director of Alibaba Cloud Operating System Technology) delivered a keynote speech called Outlook for the Next Generation Operating System. The following article is a transcript of the speech. Today, let me report on the future outlook of the Anolis Operating System (Anolis OS). The overall content will be divided into three parts: community development status, technical strategy and R&D progress, and next evolution/outlook. First, let me introduce the recent development status of the community. At the beginning of the establishment of OpenAnolis, we insisted on developing a relatively systematic and complete layout. As shown in the figure, a systematic collaboration is formed in the upstream, midstream, and downstream of the international open-source ecosystem.

First of all, in international upstream projects, OpenAnolis has maintained its technical leadership in open-source innovation. For example, some of our recent work on cloud-native storage has formed a de facto standard in the Linux community. Based on the network interface protocol interfaces of DPU (RDMA and VIRTIO), we have made our own new protocol station (SMC-R) and new protocol specification (VIRTIO 1.2), some of which have been accepted by the international community as the next-generation standard.

Secondly, the community's 21 executive director units and nearly 250 partners are forming a collaborative division of labor in the operating system industry through the community and supporting the business models of various downstream manufacturers through the evolution and iteration of community products. The upstream and downstream cooperation is linked through creating product ecology. For example, Anolis OS currently has a community version, a commercial derivative version, and an enterprise-customized version. Anolis OS can meet diverse user demands through such a community product matrix.

When it comes to the community version, in addition to the current mainstream version of Anolis OS 8, we have released the public preview of Anolis OS 23. We plan to release the official version in 2023. 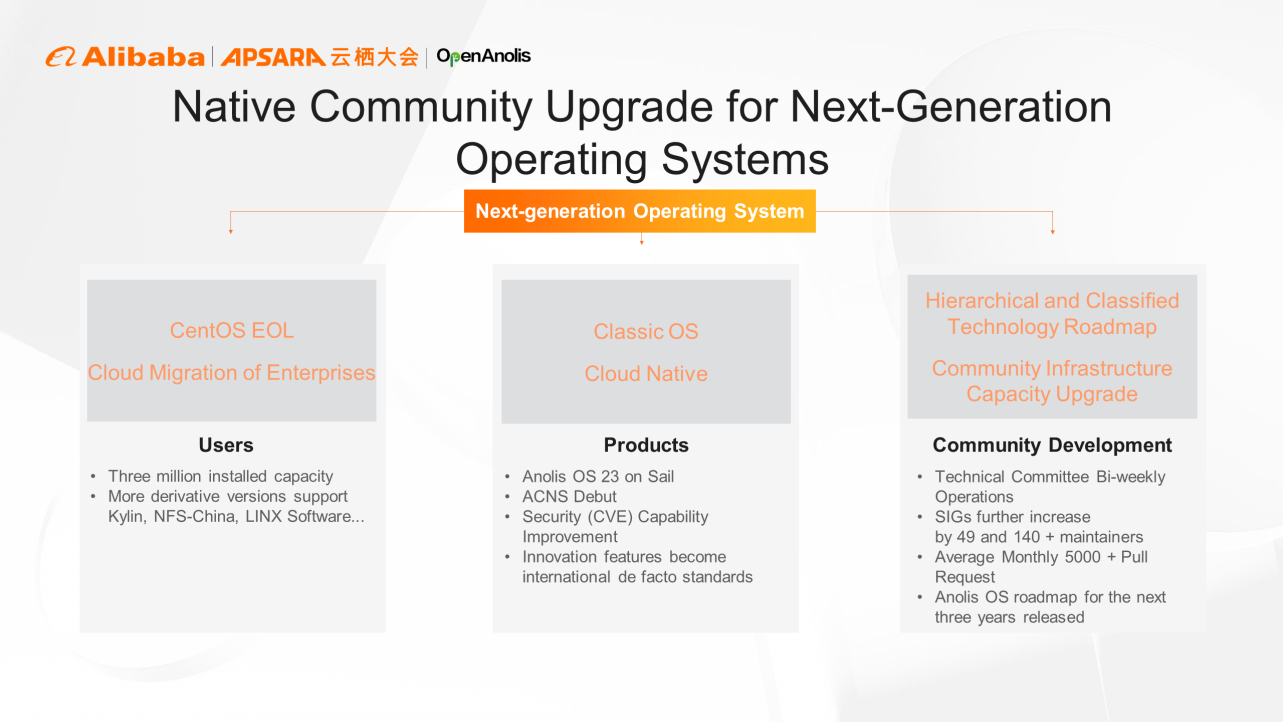 We have completed the transition from product-oriented R&D to native community-oriented collaboration over the past year because of the plan for the next-generation operating system. There are three perspectives of the transition:

Firstly, from the user perspective, we faced the impact of CentOS EOL on users. We seized this opportunity and rapidly expanded the number of community users. At the same time, we have found like-minded partners, and more manufacturers have joined the community. However, we didn't stop there. We ponder the future of the entire computing industry, clearly set out the community's long-term mission, and take solving the problem of enterprise cloud migration as an important driving force for community progress, helping enterprises migrate to the cloud and make good use of the cloud.

Secondly, from the product perspective, we are thinking about two questions. One question is – OpenAnolis has created a traditional classic Linux distribution. How can we further iterate into a better product form with cloud-native technology in the future? Another question is – How can we continue to lead the innovation in the industry? It is worth mentioning that the OpenAnolis Technical Committee recently announced the next-generation operating system roadmap and released the Anolis Cloud Native Suite (ACNS) for the first time. In addition, in terms of the capability of security vulnerability management for CVE, OpenAnolis adheres to policy compliance and has further cooperation and interaction internationally.

Finally, from the perspective of community developers, we are constantly thinking about how to do a good job in the selection of operating systems and the construction of the entire open-source supply chain through the hierarchical and classified technology roadmap. OpenAnolis is a developer platform and a product collaboration platform, which is a very large and complex system. As a result, we will upgrade community infrastructure capabilities around the next-generation operating system. Based on this, the OpenAnolis Technical Committee released a blueprint for the community's product versions for the next three years.

Secondly, we promote technology commercialization in a three-step strategy in technology governance.

First, relying on the community version, create a community innovation technology portal. Based on the hierarchical and classified technology roadmap, promote the realization of collaborative research and development by communities.

Second, promote the incubation and maturity of innovative technology features through the community and transplant these technologies to mainstream versions.

Third, innovative technologies can meet commercial standards and be merged into the commercial version of partners through the large-scale use of community products. For example, as mentioned earlier, we have standards for cloud-native storage features and cloud-native network-related features upstream but also apply them to scale in other Internet companies in China. Next, let's talk about the layout and development progress of the next-generation operating system of the community. The community today has 49 SIGs, hundreds of maintainers, and thousands of developers. How can the community achieve efficient innovation and integrated delivery of products at this scale? We have clearly focused on eight technical directions (as shown in the figure above) we call three horizontal and five vertical architectures.

The three horizontal architecture includes two north directions and one south direction. The northbound directions are the two scenarios of the classic operating system and cloud-native. Today, these two scenarios have a rich ecosystem. The southbound scenario focuses on the hardware ecosystem. We hope that in a multi-chipset, multi-data center future, there will be a very good product to accommodate this diversity that can give users a consistent experience on and off the cloud.

We believe the competitiveness of the future community will focus on these eight directions. Both the release of Anolis OS and the demand pool for community product demand management will be organized based on these eight technical directions. As a result, OpenAnolis will focus on the eight technical directions and gain more technical influence, richer open-source product matrix more external industry cooperation, and a richer hardware ecosystem. Next, let's introduce the main product features of Anolis OS 23. Firstly, Anolis OS 23 adopts a dual-kernel architecture: 5.10 default kernel and 6.x innovative kernel. Among them, the 5.10 kernel is the productional kenrel that supports the next-generation data center chips. The 6.x kernel, which is the focus of future research and development of the OpenAnolis Technical Committee and community executive director units, is in continuous rolling selection. Second, Anolis OS 23 adopts the toolchain for chipset optimization, which is the key to system performance improvement. Third, scenario-oriented optimization of peripheral solutions and features together form a peripheral product matrix around Anolis OS 23, such as the ACNS and SiliconFastOS released here. In addition, the main product features include security and credibility, software and hardware collaboration, read-only storage, and container storage. Finally, focus on the Anolis Cloud Native Suite (ACNS). In future cloud-native scenarios, the design starting point of ACNS is still relatively high, considering what kind of software stack the user needs. For example, the ACK-D in the ACNS is a Kubernetes distribution. In addition, Kata 3.0 in the upstream became the de facto standard of the community and the best practice of OpenAnolis. As for the cloud-native storage, we have implemented the main feature of EROFS in the Linux 5.19 kernel, and the feature is supported in the community 5.10 and 4.19 kernel. With this main feature and the CNCF Nydus project, a complete cloud-native storage acceleration scheme is formed and applied in other Internet companies. In addition, the suite includes the image distribution operating system and LifseaOS for container optimization, reducing the cost of data centers. This technology has begun to benefit the downstream enterprise market and has formed a case of enterprise application.

Let's imagine what the future technological evolution of OpenAnolis will look like if ACNS and Anolis OS 23 constitute an evolutionary starting point for the future software stack together. Here, we briefly talk about the possible future direction of technological evolution. The industry is facing a fragmented hardware ecosystem where heterogeneous computing is diversified in the cloud-edge-terminal scenario. How the operating system can provide a consistent experience for application developers while providing diversified support in cloud scenarios is the goal of Anolis OS over the next three to five years. We also see that in Apsara or the computing industry, the Serverless cloud-native is the future trend. The Anolis OS must serve such scenarios well.

Today, the development of hardware has entered a so-called post-Moore era. Although the chipset manufacturing technology continues to develop (1 nanometer), the overall development speed is slowing down. This brings a big challenge to today's data centers and will promote the emergence of some relatively innovative technologies in the data center (such as the development of heterogeneous computing), especially the development of DPU technology or XPU and the development of intelligent hardware. A smaller operating system may run inside the hardware. Relying on the system data, the hardware uses resource management and scheduling technology to reduce the computing costs of the data center. In addition, technologies related to pooling physical resources can continuously improve computing density and reliability and break the boundaries of existing physical machines. In the post-Moore era, we stand on the operating system and need to fully consider multiple development directions and opportunities, such as intelligent hardware, resource pooling, data security and privacy computing, and full-stack collaborative design and optimization of software and hardware.

Finally, OpenAnolis will soon set up an accelerator SIG, and we will release the accelerator plan. We hope we will have more achievements in software and hardware collaboration over the next three years.

io_uring vs. epoll – Which Is Better in Network Programming?