18,844 0
In this tutorial, we will show you how to read and write data to Alibaba Cloud's Network Attached Storage (NAS) service from an Alibaba Cloud Function Compute serverless function.

In this tutorial, we will show you how to read and write data to Alibaba Cloud's Network Attached Storage (NAS) service from an Alibaba Cloud Function Compute serverless function.

What Is Alibaba Cloud's Function Compute?

Alibaba Cloud's Function Compute is a fully-managed, event-driven compute service for serverless applications. Developers focus on writing and uploading code without having to worry about building the underlying infrastructure or maintaining complicated server architectures.

What Is Network Attached Storage (NAS)?

Alibaba Cloud's Network Attached Storage (NAS) is a file storage service that supports standard file access protocols. This means you don't have to modify existing applications; both Windows and Linux applications can use the NAS service.

Alibaba Cloud's NAS service is extremely reliable and guarantees high throughput and low latency. NAS gives you a distributed file system with unlimited capacity as well as performance scaling. Simple and easy to use, NAS provides mount points that connect to Alibaba Cloud Elastic Compute Service nodes residing on VPCs. The mount points allow programmers to perform file operations as if the files were stored locally.

With Function Compute, we will demonstrate the ease with which you can prepare code to access Alibaba Cloud's Network Attached Storage. We will demonstrate read and write operations in Python, although a number of languages are available.

You will also need a Virtual Private Cloud (VPC) installed and up and running in your region. The VPC must have a Security Group and an ECS running on it.

Go to the console page and click through to NAS. In the NAS console in your region, click Create File System.

Select the following details in your region and click OK. Connect up your VPC to the NAS Mount Point and configure the default Permission Group. The NAS console will refresh and you will see the details of the Mount Point. You will see details of the Mount Point. Now we are ready to create a Function Compute Service that connects to the NAS via the Mount Point.

Click through to the Function Compute console from the Products page. In Advanced Settings, select your VPC details and scroll down to NAS Config settings. -1 is the default UserId and indicates a random user. We've used 168 as the recommended GroupId.

Scroll down to configure and Authorize the NAS Full Access role. Now we're ready to write some code that reads and writes data to the NAS we just set up.

In the Service details, click the add button to create a new Function. Give the Function a name and select the runtime. You will see the details of the Function you just created. Copy-paste the following code into the IDE.

Notice that the root_dir parameter points to an event. In the Event details, add the following key-value pairs and click OK. 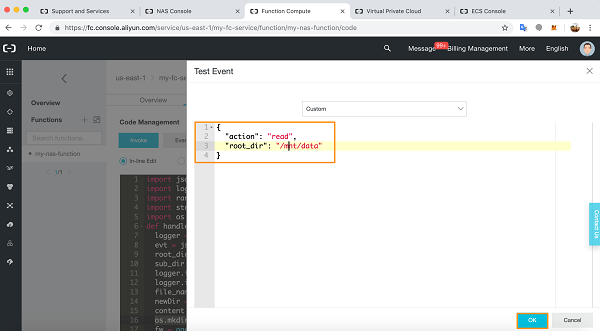 In the output underneath the code you will see the result. Here we can see the file path for the successful NAS write. Make a note of the resulting file path. Follow all the setup steps as in the previous section until you are ready to enter the code. In the Code Management IDE, enter the following code:

We now have to create an Event for the key-value pairs. Click Event.

In the Event pull out, add the following key-value pairs.

file_path is the result of the previous read function. You will see the successful result in the output. First, we told you about Alibaba Cloud's Function Compute serverless cloud product and how you can use it for coding multiple types of applications and scenarios.

We then told you a little bit about Alibaba Cloud's Network Attached Storage service and how it simplifies applications requiring networked storage. We told you about some of its features and benefits, specifically its ease of use.

We then informed you that the tutorial's goal is to demonstrate the simplicity and flexibility of Alibaba Cloud's NAS service by building an Alibaba Cloud Function Compute service that accesses Alibaba Cloud's Network Attached Storage and performs some simple input/output operations.

Watch out for more tutorials on products and services from Alibaba Cloud.

Drilling into Big Data – A Gold Mine of Information (1)