Unveiling the Secret: The Technology Evolution of the Alipay Mini Program "V8 Worker"

2,688 0
This article is a summary of the work on the Alipay mini program V8 Worker. Introduction: This article shares the accumulated experience and summary of our work on the Alipay mini program V8 Worker, including the technology evolution, architecture, basic features, the output of JavaScript (JS) engine capabilities, and some optimization solutions. Discussions and corrections are welcomed.

From Service Worker to V8 Worker

This topic describes the technology evolution from Service Worker to V8 Worker for Alipay mini programs.

As we all know, the source code of an Alipay mini program can be packaged into two parts:

The frontend framework APPX is also divided into the Render (af-appx.min.js) and the Worker (af-appx.worker.min.js): 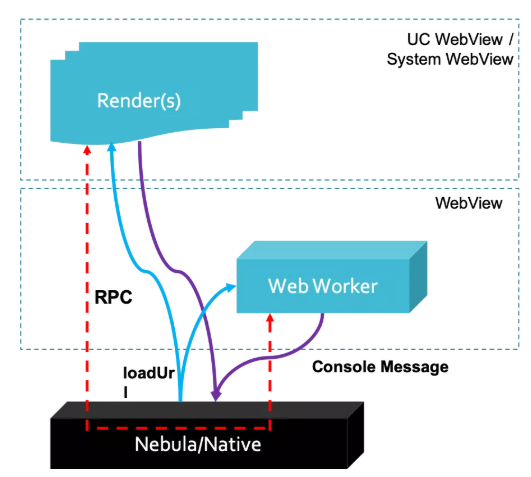 The serial initialization of the Service Worker affects the startup performance of the mini program. The WebView Worker is not lightweight enough to run the mini program Worker code. Using a proprietary JS engine to do the work of the Worker was the best choice, so the V8 Worker was created.

The following figure shows the basic structure of the V8 Worker of the mini program, which will be elaborated on later in this article. Using the V8 engine to run the Worker has the following benefits:

The Architecture of V8 Worker

This topic describes the V8 Worker project structure and the mini program architecture based on V8 Worker. If you are not familiar with V8 engines, here is a brief introduction to V8 and links to learning materials.

Introduction to and Getting Started with V8

Before we introduce V8 Worker, let's briefly learn about the V8 engine[2]. If you are familiar with V8, please skip this part.

V8 is Google's open-source high-performance JS and WebAssembly engine and is used in projects, such as the Chrome browser and Node.js. The threshold for learning V8 is still relatively high. Here, we only introduce the basic concepts of V8 that you need to know to read this article, as well as the official embedded V8 HelloWorld code. Some learning links are below.

In V8, a context is an execution environment, which makes it possible to execute isolated and unrelated JS code in a V8 instance. You must explicitly specify a context for the JS code you are about to execute.

This is because JS provides some built-in tool functions and objects, which can be modified by the JS code. For example, if two completely unrelated JS functions are modifying a global object in the same way, an unexpected result is likely to occur.

Local handles are stored on a stack and are deleted when the destructor of the stack is called. The lifecycle of these handles depends on the handle scope. When a function is called, the corresponding handle scope is created. When a handle scope is deleted, the garbage collector will reclaim objects referenced by handles in the handle scope if the objects are no longer accessible from JS or no other handles point to them. The examples in the "Getting Started Guide" use this type of handles.

In a context, a template is a model for JS functions and objects. You can use a template to encapsulate C++ functions and data structures in a JS object so that it can be operated by JS code. For example, Chrome uses templates to encapsulate C++ DOM nodes as JS objects and install functions in the global namespace. You can create a set of templates and reuse the set in each created context. You can create as many templates as you require. However, in any context, only one instance of any template can be created.

In JS, there is a strong duality between functions and objects. To create a new object type in C++ or Java, you need to define a class. In JS, however, you need to create a function and use the function as a constructor to generate an object instance. The internal structure and functionality of a JS object are largely determined by the function that constructed it. These attributes are also reflected in the design of V8 templates. Therefore, V8 has two types of templates:

Each function template is associated with an object template. It is used to configure objects created with this function as a constructor.

An accessor is a C++ callback that calculates and returns a value when an object property is accessed by JS code. Accessors are configured through the SetAccessor method of an object template. This method receives the name of the property and the callback function associated with it, and is triggered when JS reads and writes the property.

The complexity of an accessor depends on the type of data you access:

You can configure a callback to be called when any property of the corresponding object is accessed. This is an interceptor. In terms of efficiency, interceptors can be divided into two types:

The Mini Program Architecture Based on V8 Worker

This topic describes the mini program architecture based on V8 Worker in detail, including the JSAPI process details of the Render and V8 Worker and how the Render and the Worker communicate directly. The Architecture with a Single V8 Context

As shown in the preceding figure, in the initial development of V8 Worker, one mini program occupies one V8 isolate, and one V8 isolate only has one V8 context. The frontend framework APPX code appx.worker.min.js of the mini program and the service code index.worker.js of the mini program run on the same V8 context on the same V8 isolate. This design will incur JS security issues. The service JS code can access the internal JS object and internal JSAPI, which are injected into APPX, in the form of splices. In the same V8 context, it is impossible to isolate the execution environment of the service JS code from that of the APPX framework JS code. We will explain how to resolve this security problem later.

The JSAPI Call Process of the Render

As shown in the preceding figure, the direct two-way traffic transmission of the Render and Nebula is realized through Console.log and loadUrl[9] in the WebView.

From the Container to the Render

From the Render to the Container

The JSAPI call from the Render to the container is implemented through the Console.log[11] Web API.

The JSAPI Call Process of the Worker

From the Worker to the Container

Meanwhile, we have injected the nativeFlushQueue API into the V8 Worker environment in advance and have bound the Java callback of this API

This way, the Worker calls AlipayJSBridge.call() in JSAPI and finally calls back to the AsyncJsapiCallback() on the container side.

From the Container to the Worker

After the JSAPI operation is processed in the container, if any results are returned, they are returned to the Worker.

Communication Between the Render and the Worker

Take sending messages from the Render to the Worker as an example the process is listed below:

You can see that a message needs to undergo multiple times of serialization and deserialization from the Render to the Worker if the container bus-based message channel is used, which is very time-consuming. It not only affects the startup speed of a mini program, but it also affects the frame rate of the mini program because interactive events, such as the sliding of the mini program, involve a large number of messages between the Worker and the Render.

MessageChannel allows us to create a new message channel and send data using its two messagePort properties. As shown in the following figure, MessageChannel creates a pipeline, and the two ends of the pipeline respectively represent a messagePort, both of which can send data to the other end through portMessage and accept the data from the other end through onMessage. With the features of MessageChannel, the communication between the Render and the Worker can be done without going through the Nebula bus, which reduces the serialization and deserialization of messages. How can we solve these problems? All problems in computer science can be solved by another level of indirection. Therefore, JavaScript Interface (JSI) was born.

JSI is an encapsulation of JS engines, such as V8 and JSC. It provides service users with basic, complete, stable, JS engine-free Java APIs and Native APIs that are compatible with later versions.

The benefits brought by JSI are listed below:

The JSI access document details on how to quickly use the JS engine with JSI are listed below: As mentioned in the previous section, V8 Worker that uses the structure of a single V8 isolate and a single V8 context will incur JS security issues and cannot isolate the execution environment of the service JS code from that of the frontend framework JS code. The following section describes the multi-context V8 Worker and multi-isolate multi-threaded Workers.

As described in the V8 context security model[16], the same origin is defined as the same context. By default, different contexts cannot be accessed from each other unless the security token is set through SetSecurityToken. Based on this feature of contexts, we isolate the JS execution environments of the frontend framework, mini program services, and mini program plug-ins in a secure manner.

In a mini program, some tasks that are processed asynchronously can be placed in the background Worker thread to run. After the task is completed, the result is returned to the main thread of the mini program. This is called a multi-threaded Worker. The preceding figure shows the framework of a multi-threaded Worker. The main thread of the mini program's Worker runs on a separate V8 isolate, while the service JS, APPX framework JS, and plug-in JS run in their respective V8 contexts. Meanwhile, for each Worker task, a separate Worker thread will be initiated, and a separate V8 isolate and V8 context instance will be created. Each Worker task and the tasks in the main thread of the mini program are isolated from each other through threads and isolates.

You may want to give the JS engine capability at the C++ layer to some other Alipay services, such as Native GCanas, and meanwhile spare the services from the need to connect the JS engine. In this case, you will need the V8 Worker to be able to output the JS execution environment of the mini program. The V8 Native plug-in is one of the solutions.

The following figure shows the framework of the V8 Native plug-in. The design idea is listed below:

The plug-in service will gain the following capabilities by connecting to the V8 Native plug-in: The reason for the initial use of V8 Worker was to solve the serial initialization and execution problems of the Render and the Worker of the mini program.

The preceding figure shows how V8 code caching works. Since JS is a Just-in-Time (JIT) language, V8 needs to parse and compile it before it is executed. Therefore, the execution efficiency of JS has always been a problem. To address this problem, you can use the V8 code caching. When the JS code is executed for the first time, the bytecode cache of the JS code is generated and stored on the local disk. When the same JS code is run for the second time, V8 can use the saved bytecode cache to rebuild the compilation result, so there is no need to recompile the code. With the code cache, the JS code will be executed faster.