16,346 0
This article explores the concepts and benefits of generic programming and serialization through a simple example.

Serialization is a dumping-recovering operation process, which supports operations, such as dumping an object to a temporary buffer or a permanent file and recovering the contents of the temporary buffer or the permanent file to an object. The purpose is to share and transfer data between different application programs, achieving cross-application, cross-language and cross-platform decoupling, and to instantly save the values of the contents of the data structure to a file when the application is abnormal or crashes on the customer site, and to recover these values to assist in analyzing and locating the causes when they are sent back to the developer.

Generic programming is actually all around us. Many functions and classes in std and stl namespaces that we often use are implemented by generic programming. For example, in the code above, std::cout is the template class, and std::basic_ostream is a specialization.

Starting with the Standard Input and Output of C++

A series of compilation errors occur if you use the following method.

The error content is basically some information that clip does not support the << operator and the conversion operation is not supported when the clip is converted to a series of built-in types supported by cout, such as void* and int.

To solve compilation errors, we need to make the class MyClip support input and output operators >> and <<. Similar implementation code is as follows.

To access the private member variables of class objects normally, we also need to add serialized and deserialized friend functions in custom types (recall the reason why friend functions must be used instead of directly overloading operators >> and <<). For example:

The implementation method of serialization is intuitive and easy to understand, but the defect is that for large-scale project development, the number of custom types may reach tens of thousands or even more, so we need to implement 2 functions for each type. One is to serialize the dumped data, and the other is to deserialize the recovered data, which not only increases the amount of code developed and implemented, but also needs to modify these 2 functions once the member variables of some classes are modified in the later stage.

At the same time, more complex custom types are considered, such as member variables that contain inheritance relationships and custom types.

To address the above questions, is there a way to reduce the workload of code modification while being easy to understand and maintain?

For the problems encountered in using C++ standard input and output methods, Boost provides a good solution - all types of dumping-recovering operations are abstracted into 1 function, which is easy to understand. For the above types, the above 2 friend functions are simply replaced with the following 1 friend function.

The implementation of the friend functions is similar to the following:

BOOST_SERIALIZATION_NVP is a macro defined inside Boost, whose main function is to package various variables.

The use of dumping-recovering acts directly on operators >> and <<. For example:

For classes MyFilter and MyVideo, the same method is used, which is to add an implementation of the template friend function "serialize", respectively. As for std::list template class, Boost has already implemented it.

At this time, we found that for each defined class, all we need to do is declare a template friend function inside the class and implement the template function outside the class. For the subsequent modification of the member variables of the class, such as adding, deleting or renaming member variables, it is only necessary to modify a function.

The Boost serialization library is perfect enough, but the story is not over!

While developing on the terminal, we found several challenges in referencing the Boost serialization library.

To solve these problems encountered in using Boost, we think it is necessary to re-implement the serialization library to remove the dependence on Boost and meet the following requirements at the same time:

To be compatible with the existing Boost code and keep the habits of the current developers, while minimizing the workload of refactoring with code modification, we should keep the template function "serialize". For the internal implementation of the template function, the following definitions are directly used without repackaging the member variables, to improve the efficiency.

For the call to the dumping-recovering interface, the current invocation method is still used, except that the input and output classes are modified to the following

First, let's look at the process flow chart of the current design architecture. For example, for the dumping class text_oarchive, the interfaces it supports must include the following

When developers call the operator function <<, they need to callback to the template function "serialize" of the corresponding type first.

When developers start to operate on each member of a specific type, judgment is needed at this moment. If the member variable is already a built-in type, perform the serialization directly. If it is a custom type, callback to the template function "serialize" of the corresponding type.

In the code above, basic_save::invoke completes the template type derivation at compile time and chooses whether to dump the built-in type directly or callback to the "serialize" function of the corresponding type of the member variable to continue repeating the above process.

Due to the limited number of built-in types, we choose to set the default behavior of the template class basic_save to callback to the "serialize" function of the corresponding type.

In this case, the template parameter of the above code has an additional parameter E. Here, it is mainly necessary to perform special processing on the enumerated type. The implementation using partial specialization is as follows:

At this point, we have completed the default behavior of the overloaded operator &, which is continuously backtracking to the template function "serialize" of the corresponding member variable type, but we need to stop the backtracking process for a built-in model, such as the int type.

For the int type, the integer value is directly dumped into the output stream. At this time, a final dump function needs to be added to text_oarchive.

Here, we find that in the save member function, we have already output the value of the specific member variable to the stream.

For other built-in types, they are treated in the same way and implemented by referring to the source code of C++ std::basic_ostream.

Correspondingly, the operation flow of text_iarchive for recovery operation is as follows: 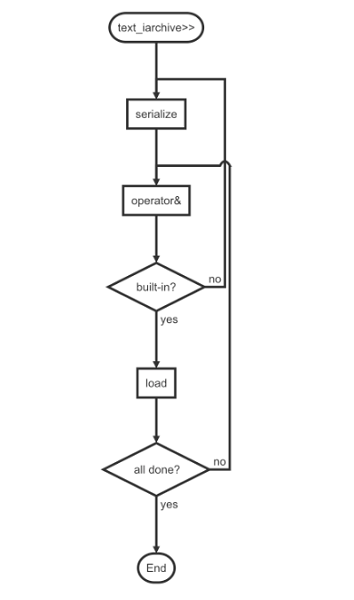 Due to the current project, the re-implemented serialization library does not support the memory data pointed by the dumping-recovering pointer. However, the current design framework has taken this extensibility into account and it may be supported in the future.

Alibaba Cloud BaaS - Part I: What is Blockchain?