26,093 0
Deep Learning is a subfield of machine learning, and aims at using machines for data abstraction with the help of multiple processing layers and complex algorithms.

This is the second article in a two part series about QA Systems and Deep Learning. You can read part 1 here. Deep Learning is a subfield of machine learning, and aims at using machines for data abstraction with the help of multiple processing layers and complex algorithms. Although similar to Artificial Intelligence (AI) and Machine Learning, Deep Learning takes a more granular approach to learning from data. One of the best applications of deep learning is digital assistants such as Siri and Google Now. These assistants can retrieve information about a human-to-human interaction. For instance, they can answer the question, "What movie is playing at my local cinema?" However, they do not know how to parse that sentence and need to be programmed to understand the context. This is where deep learning is vital, as it enables machines to decipher speech and text.

In recent years, researchers further explored deep neural networks (DNNs) in regards to image classification and speech recognition. Language learning and representation via DNNs gradually became a new research trend. However, due to the flexibility of human languages and the complexity involved in the abstraction of semantic information, the DNN model is facing challenges in implementing language representation and learning.

First, compared to voices and images, language is a non-natural signal and symbol system that is entirely produced and processed by the brain. The variability and flexibility of languages are far more than that of image and voice signals. Second, images and voices have precise mathematical representations. For example, grayscale images are mathematical matrices, and even the most granular element has a definite physical meaning, with the value at each point of the pixel indicating a grayscale color value. In contrast, the previous bag-of-word representation method may result in problems such as difficulty in deriving meaningful insights due to excess number of dimensions, high sparsely, and semantic information loss in language representation.

Researchers are increasingly interested in the application of the deep learning model for natural language processing (NLP), focusing on the representation and learning of words, sentences, articles, and relevant applications. For example, Bengio et al. obtained a new vector image called word embedding or word vector using the neural network model [27]. This vector is a low-dimensional, dense, and continuous vector representation, and contains semantic and grammatical information of the words. At present, word vector representation influences the implementation of most neural network based NLP methods.

The second is how to implement semantic matching between the question and the answer. To ensure the reply to the user's question meets strict semantic rules, the system must make reasonable use of a high-level abstract semantic representation of the statements to capture the semantic-matching model for the two texts.

Given the language representation capability that CNN and RNN have shown in the NLP field in recent years, more researchers are trying the deep learning method to complete key activities in the QA field, such as question classification, answer selection, and automatic response generation. Also, the naturally annotated data [50] generated by internet users for exchange of information, such as microblog replies and community QA pairs provide reliable data resources for training the DNN model, thereby solving the data shortage problem in the QA research field to a large extent.

DNNs are gaining popularity in the world of machine translation. Researchers have designed various kinds of DNNs, such as deep stack networks (DSNs), deep belief networks (DBNs), recurrent neural networks (RNNs) and convolutional neural networks (CNNs). In NLP, the primary aim of all DNNs is to learn the syntactic and semantic representations of words, sentences, phrases, structures, and sentences so that it can grasp similar words (phrases or structures).

The learning of CNN-based DNNs is aims at grasping representation vectors that form sentences. It does so by scanning sentences; extracting, and selecting characteristics. First, a sliding window is used to scan the sentence from left to right. Each sliding window contains multiple words, with a vector representing every word. In the sliding window, the convolution extracts the characteristics. Then, max pooling (a sample-based discretization process) selects characteristics. Repeating the above operation several times results in the retrieval of multiple vectors for representation. Connecting these vectors enables the semantic representation of whole sentences. As shown in Figure 1, inputs of CNN-based sentence modeling are in the form of word-vector matrices.

The output is meaningful after connecting values of multiple points on each line in the matrix, as it then represents the corresponding word in the sentence. The word vector matrix is obtained by transforming words in a sentence into corresponding word vectors and then arranging them in the same order as the words. This model is used to express a sentence as a vector of fixed length through multilayer overlapping, convolution, and max pooling. Such architectures can be used to handle various supervised natural languages by adding a classifier on the top layer of the model. CNN-based sentence modeling can be presented as a "combination operator" with a local selection function. With the progressive deepening of the model level, the representation output obtained from the model can cover a wider range of words in a sentence. A multi-layer operation achieves sentence representation vectors of fixed dimension. This process is functionally similar to the recurrent operation mechanism [33] of "recursive automatic coding."

The RNN model has a structure similar to that of the hidden Markov model, but with more powerful presentation skills. The intermediate representation has no Markov assumption, and the model is non-linear. However, with the increase of the sequence length, the vanishing gradient problem occurs [43] during the RNN training. To solve this issue, researchers improved the design of recurrent computing units in the RNN and proposed different variants, such as Long Short-Term Memory (LSTM) [44, 45] and Gated Recurrent Unit (GRU) [56].

Recently, researchers finished semantic representation learning in image scenarios of questions by integrating CNN and RNN. During the word sequence scanning conducted by RNN for questions, the model uses the combined learning mechanism based on deep learning to finish learning "with texts and graphics," to realize question modeling in the image scenario for the final QA matching.

For instance, during the RNN's traversal on the words in questions, the learning model proposed by Malinowski, et al. [48] considers the image representation obtained by CNN and the word vector on current word position as the input information for RNN. It tries to learn from the current intermediate representation, thus realizing the combined learning of images and questions. 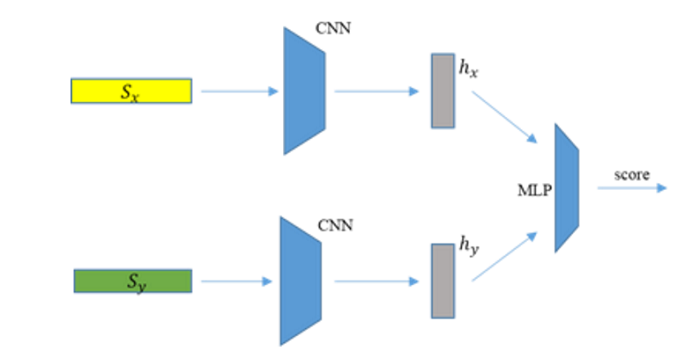 The parallel matching architecture outlined in Figure 3 shows that two independent CNNs acquire representations of two sentences, and information between these two sentences will not affect each other before receiving their own representations. This model is used to match two sentences from the global semantic aspect but ignores more sophisticated local matching characteristics. However, in questions related to statement matching, local matching often exists between two sentences. For example, question-answer pairs as shown below:
Sx: I'm starving, where are we going to eat today?
Sy: I've heard that KFC recently launched new products, shall we try some.

As shown in Figure 4, the first layer of the interactive matching architecture directly obtains the local matching representation at a lower layer between sentences by the convolutional matching of the sliding windows between them. In the subsequent high-level learning, it employs two-dimensional convolution and two-dimensional local max pooling similar to those during image field processing, to learn the high-level matching representation between sentences of questions and answers.

Compared with the retrieval-based reply mechanism, the generation-based answer feedback mechanism gives the answer that is automatically generated according to information entered by current users. It is composed of word orders, rather than answer statements generated by users editing through the retrieval of the knowledge base. This mechanism is used to construct a natural language generation model by using a large number of interactive data pairs. Using this information, the system can automatically generate a reply of natural language representation.

The automatic answer generation mode needs to solve two significant problems: sentence presentation and language production. In recent years, the recurrent neural network has performed well in both language representation and generation, in particular for the RNN-based encoding-decoding architecture, which has made a breakthrough in machine translation [31, 32] and automatic abstraction [51].

Based on the encoding-decoding frame of the GRU (Gated Recurrent Unit) [46] recurrent neural network, Shang [52] et al. proposed the dialog model "Neural Responding Machine" (NRM) that is based on the neural network and can be used to realize man-machine single-turn dialogs. The NRM is used to learn people's replies from a large scale of information pairs (question-answer pairs, microblog-reply pairs) and to save models acquired in nearly four million model parameters for the system, that is, to obtain a natural language generation model.

As shown in Figure 5, NRM regards the sentence input as a sequence of word representations. Then, NRMS transforms it into a sequence of intermediate representations through an encoder, that is, an RNN model, and finally converts it into a series of words as inputs of a sentence through a decoder, that is, another RNN model. Since the NRM uses a hybrid mechanism during coding, the sequence of an intermediate representation obtained from coding cannot only fully grasp user's statement information, but also retain other details of sentences. It also employs the attention mechanism [31] during decoding to ensure the generation model can easily grasp the complex interactive model in the QA process.

The generation-based question answering mechanism and the retrieval-based retrieval feedback mechanism have their characteristics: in microblog data with personalized expression forms, the accuracy rate of the former is relatively higher than that of the latter, namely 76 percent and 70 percent respectively. However, answers obtained from the former may have grammar impassibility and poor coherence while those from the latter may have rational and reliable expressions since microblog users edited them.

At present, the NRM and Google's Neural Conversational Model (NCM) [53] still realize the language generation at the upper level of complicated language model memory and combination but are unable to use external knowledge during an interaction. For instance, in the sentence, "How does the West Lake of Hangzhou compare to the May Day of last year?" they are unable to give a reply related to the real situation (comparison results).

Nevertheless, the significance of NRM and NCM is that they preliminarily realize the humanoid automatic language feedback. In the past few decades, most QA and dialogue models generated through researchers' unremitting efforts were based on rules and templates or research conducted in an extensive database. These two modes cannot generate feedback and lack adequate language comprehension and representation. This is often due to limited data points and the expression of templates/examples. These modes have certain deficiencies in their accuracy and flexibility and struggle to consider both, the natural smoothness of language and the matching semantic content.

This paper briefly introduces the development history and basic architecture of the QA system. It also presents the DNN-based semantic representations, semantic matching models of different matching architectures, and answer generation models for solving some of the fundamental problems in the QA system. Deep learning has helped achieve this. However, there are still problems to be solved in the technical research of the QA system, for instance, how to understand users' questions under a continuous interactive QA scenario, such as the language understanding in the interaction with Siri. In addition, how to learn the external semantic knowledge to ensure the QA system can conduct simple knowledge reasoning to reply to relation inference questions, such as "What hospital department should I visit if I feel chest distress and cough all the time?" Moreover, with the recent research and popularization of attention mechanism and memory network [54, 55] in the natural language understanding and knowledge reasoning, new development opportunities will be provided for research on automatic question answering.