20,493 0
Matchmaking transactions play a very important role in the financial transaction system. To design a matchmaking system, it is crucial to understand t... 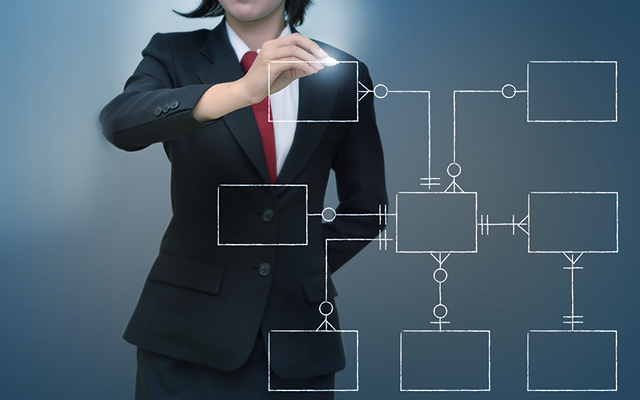 Matchmaking modules exist in different business divisions depending on the type of financial transactions. Each division is subject to independent matchmaking and hence immune from other divisions. 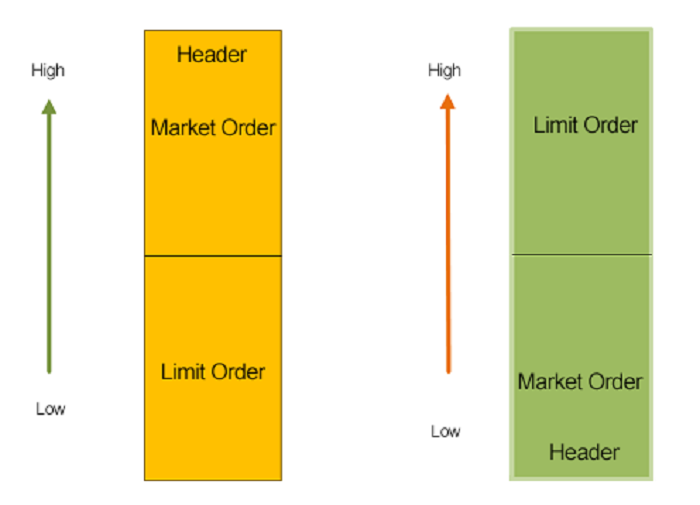 When receiving a new buying order, the matchmaking engine will search from the beginning of the selling queue to confirm if any selling orders comply with the price discipline. All orders with a selling price lower or equal to the buying price are extracted from the queue and matched into a transaction. If the selling queue is empty or the queue head fails to meet the price relationship, the system inserts the buying order into the buying queue. It will then arrange and sort the newly inserted order in the buying queue.

Correspondingly, when receiving a new selling order, the matchmaking engine will search the beginning of the buying queue to confirm if any buying orders comply with the price discipline. All orders with buying prices higher or equal to the selling price are extracted from the order queue and matched into a transaction. If the buying queue is empty or the queue head fails to meet the price relationship, the system inserts the selling order into the selling queue. Since the selling queue has two parameters, price and time, both do sorting and insert the new order accordingly [23]. 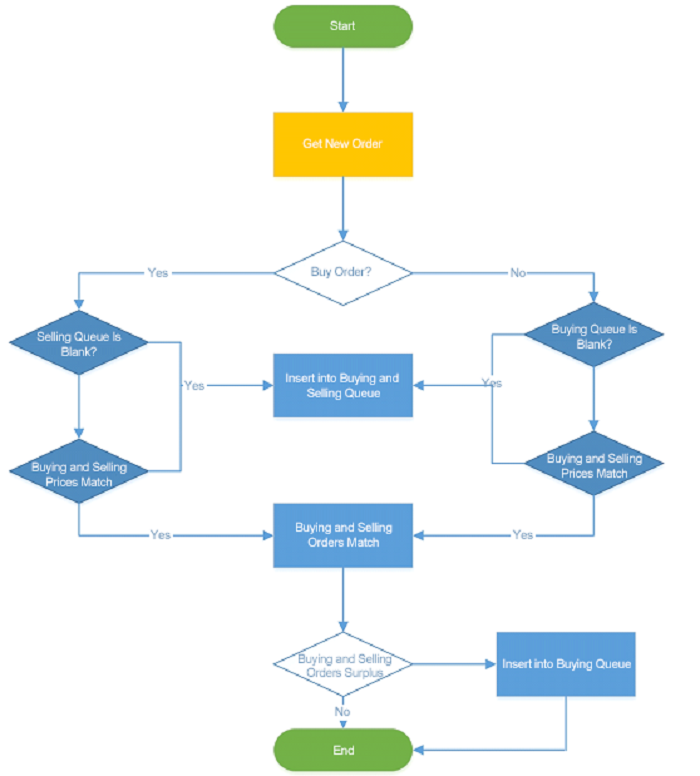 In combination with the selling or buying orders, Figure 3 shows the process followed by the matchmaking algorithm. According to the sequence illustrated in Figure 3, the order of the buying and selling queues is the basis for ensuring certainty in the algorithm's output.

The poor performance of the database matchmaking technology is due to excessive interactions with the database, which leads to high I/O transactions. Meanwhile, the database transaction logic seems to restrict the overall processing speed of the system. 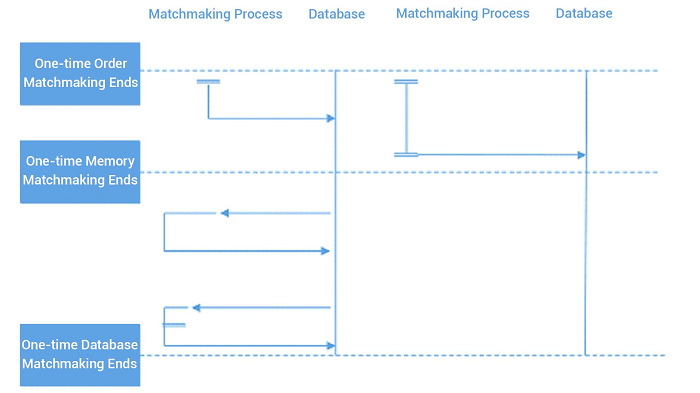 The multi-machine hot standby technology improves fault tolerance because memory matchmaking shows indigent reliability and consistency when the matchmaking engine is abnormal. Furthermore, the financial transaction system has extremely low tolerance for interrupted service and data loss due to business operations being affected.

The risk of an unavailable system from a single engine fault has significantly reduced. However, it remains hard to provide hundred percent availability due to service unavailability during large-scale failures in the server cluster. In the actual production environment, three mutual backup servers can provide higher reliability.

The matchmaking algorithm acts as a certainty state machine, tailored into multiple copies and deployed to numerous matchmaking engines in the system. Each copy operates from the same initial status. While the system receives the order sent by the gateway, it also matches such orders, successively producing the transaction record, and updating the independent state of the algorithm.

Through this method, when the system operates normally, each matchmaking engine copy has the same result. In the event of a fault or exception in the system, the engine will is inconsistent. In other words, the system deems any inconsistent results as an exception.

To implement the matchmaking system replicated based on the memory status, the following schemes help realize the key technologies of state machine replication:

●The atomic multicast will solve the reliable multicast and global ordering of the engine order.
●The use of assembly line matchmaking technology based on the unlocked order queue to realize rapid order matchmaking.
●The realization of database interactions by asynchronous consistent persistence technology [3]
●The use of invalid redundancy technology to monitor the status of the engine cluster to ensure the fault tolerance of the system; [24] [3115) progress catching-up technology is used to solve the problems of recovering the fault matchmaking engine or adding a new engine.

Figure 6 illustrates a standard performance matchmaking model's hardware architecture. The system is composed of N server sets, N gateway sets, X product clusters (each cluster consists of between 2 to 3 matchmaking engines, and responsible for response processing of product orders), one transaction record database and optional monitoring system. The client has an established connection to the corresponding gateway. The gateway is responsible for receiving orders submitted by the client and forwarding them to the relevant product cluster according to the financial product category of the order. All engines in the project cluster will receive the order sent by the gateway, match the order according to the matchmaking business rules, and relay the feedback message to the gateway and the client. Meanwhile, the transaction record generated by matchmaking will become part of the transaction record database. 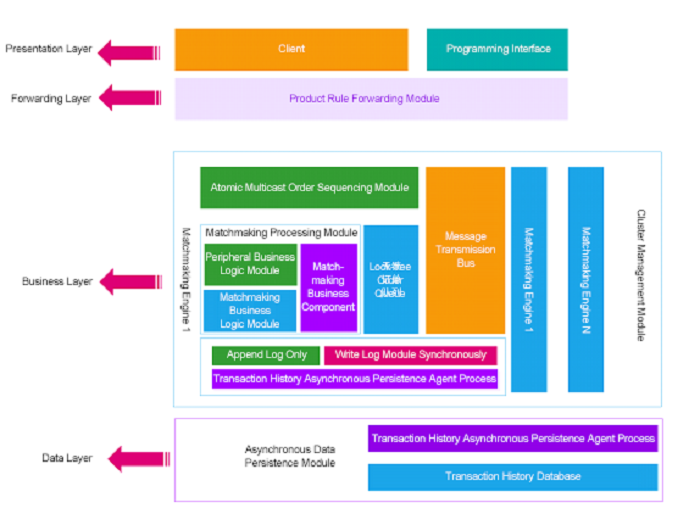 As shown in Figure 7, the elements that make up the high reliability and performance matchmaking model include the presentation layer, the forwarding layer, the business layer and the data layer. Matchmaking engine clustering mainly has the business layer at its core. Each engine is subject to the matchmaking process after order sequencing is done by the atomic multicast. A subsequent combination with unlocked order queues then delivers efficient assembly line matchmaking. Finally, the local log displays the results. In the entire business process, the messaging bus plays the role of returning the message to the forwarding layer. The system forwards the order to the corresponding engine cluster according to the product forwarding rules. The engine then reads the transaction record in the local log, writes it into process communication along with the asynchronous persistence on the data layer, and finally makes it persistent in the database. The local log strengthens the reliability of the system data. After a fault occurs, it is possible to recover the data from the local log; asynchronous persistence mechanisms improve the data persistence throughput rate. 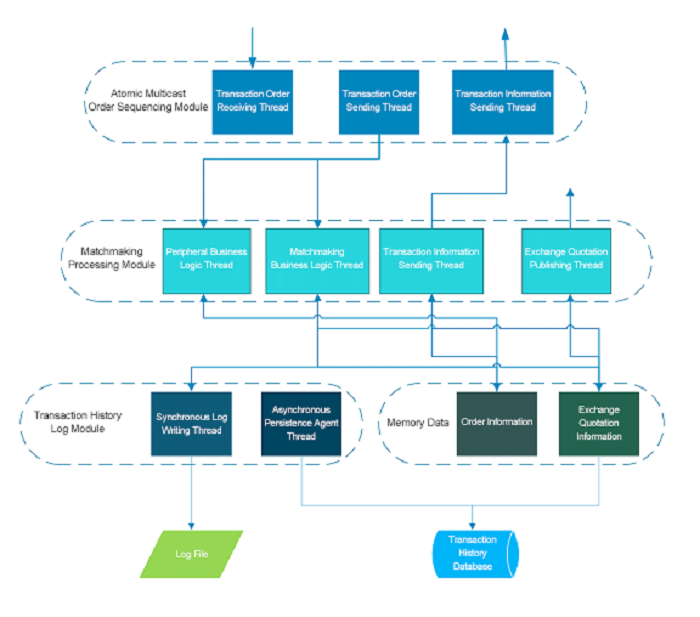 To improve system maintenance, the matchmaking engine has an atomic multicast order sequencing module, a matchmaking processor module, and a transaction record log module along with memory data. Each module has inbuilt divisions designed according to the functional business. Each part has the following functions:
●Transaction order receiving thread: receive orders from the gateway and finish the multicast order sequencing process.
●Sending thread of trade order: send the sequenced order to relevant matchmaking business thread.
●Sending thread of trade information: provide the feedback about the status of order transaction to the gateway.
●Logic thread of peripheral activities: conduct standby processes for matchmaking data, and update memory order data.
●Logic thread of the matchmaking business: match the received orders according to the certainty matchmaking algorithm.
●Release the threads of exchange quotation: process memory exchange quotation information and release it to the gateway.
●Writing thread of synchronization logs: synchronously make the transaction record produced by order matchmaking persistent into a local log file.
●Agent process of asynchronous persistence: asynchronously read out the data in the log document and make the data persistent into a database.
●Order information: save the relevant price, quantity, user, limitation, type, status and other information of the order.
●Exchange quotation information: exchange quotation information in the process of the transaction.

Starting with the overall design, the system transfers the matchmaking transaction processing from the database into the memory. Meanwhile, the multi-machine hot standby technology solves the volatility problem of memory matchmaking technology. Finally, a different approach suggests that the memory state machine replication scheme can serve as the route to realizing a high-reliability and high-performance matchmaking system.