How Efficient Can Remote R&D Be? Alibaba Released a New Taobao Mobile Version in Five Days

1,277 0
Read how Alibaba has proven that remote R&D can be efficient even when working remotely by releasing a new version of Taobao Mobile after just five days of development. 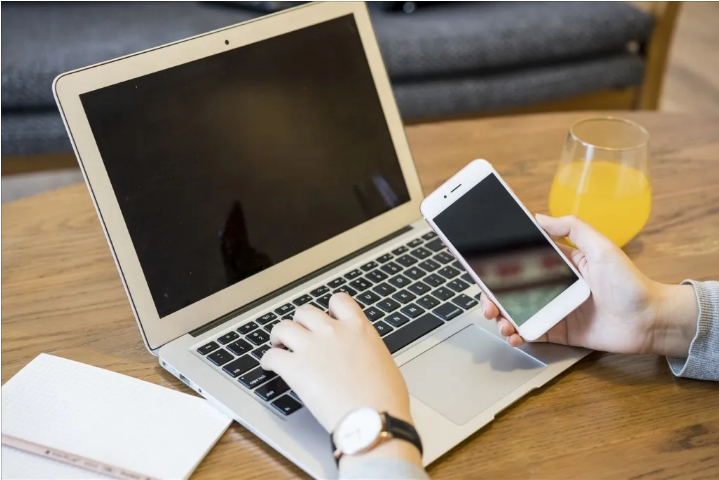 2020 has started a lot differently than anyone would have expected. While many companies in China have made some valuable preparations and some also are finding some good opportunities, and many and most are waiting for the order to resume work. Among them, Alibaba employees have called for a "no-contact, cloud office" and started remote R&D and collaboration. Leveraging the Enterprise Mobile Application Studio (EMAS), Alibaba employees completed the R&D, testing, phased release, monitoring, O&M, and operation of a new client version in one week without leaving their homes.

Cloud offices pose practical challenges to enterprises during their mobile business transformations. To most traditional enterprises, requirement communication, R&D efficiency, test assurance, release quality, O&M stability, and operation analysis are full of challenges. To ensure an efficient, collaborative, and process-based cloud office, Alibaba employees provide EMAS for remote collaborative R&D. With EMAS, the team completed the release of the new "International Women's Day" version of the Taobao Mobile app in just five days. Can working from home be efficient? Through review and clarification, this article describes how Alibaba engineers developed a new Taobao Mobile version through the cloud office in five days. 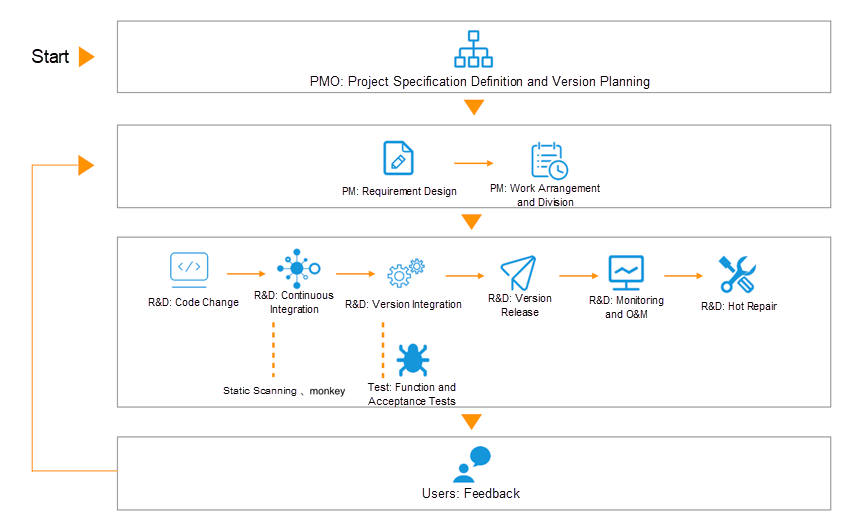 February 25: Remote R&D in One Day

Many industrial partners complain that everything gets messed up after enabling remote R&D and remote office collaboration. However, Alibaba engineers needed only one day to prove the powerful features and technologies of EMAS.

During the morning video conference, the product manager Taoxiaoer completed requirement deployment. The client developer Dingding then quickly started to develop the live video streaming module features for the Taobao Mobile IWD version. On EMAS, Dingding created a project, added a module, wrote the code, built a Taobao Mobile client, and scanned the QR code to install and test the client. The whole process was standardized and efficient. At the same time, the automatic test pipeline configured by the system started to run.

With the powerful technologies of EMAS, the automatic mobile phone adaptation test and static code scanning were configured in the Taobao Mobile R&D process. After the client was built, the pipeline automatically triggered the mobile phone adaptation test and inspected the coding standard of deliverables. In the test phase, features such as crash data, intelligent Monkey service, and process-based checkpoint configuration were provided. The adaptation success rate exceeded 95%.

After two days, Alibaba engineers had completed remote R&D and automatic testing. Next, they had to formulate the release plan, which was the most critical step.

The new Taobao Mobile "IWD" version was pushed to users based according to the phased release strategy. The phased client release feature provided by EMAS adopts a multi-dimensional grayscale strategy to ensure that the release process is visual and controllable and the new version is secure and stable. 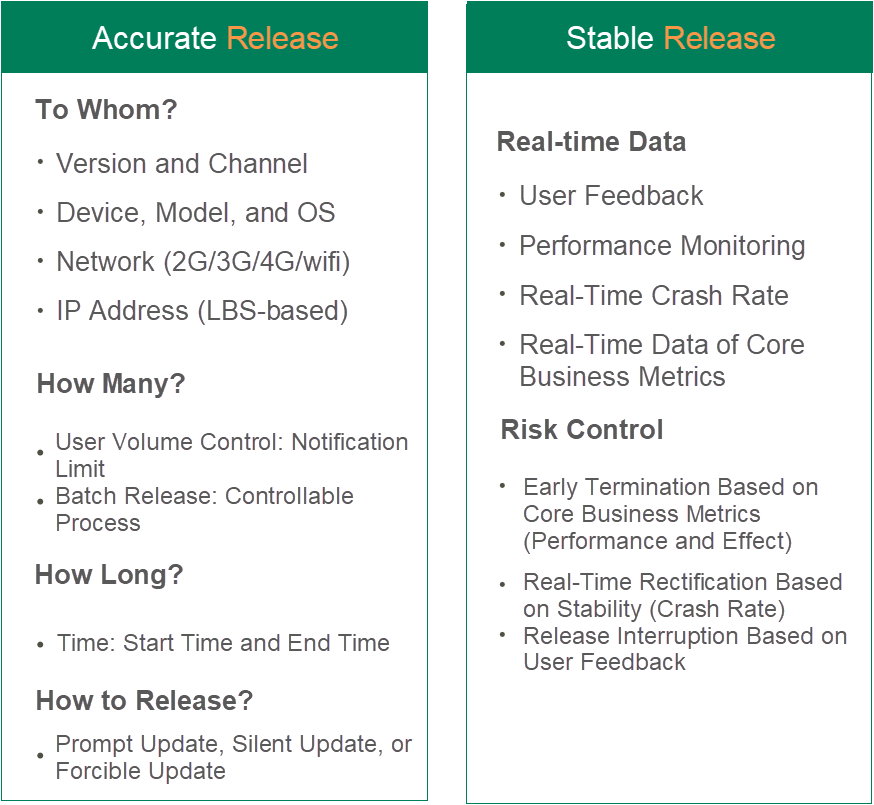 Based on dimensions, such as the brand, model, operating system, and number of people, some users were selected in batches for phased client release. During the process, engineers monitored stability data, collected user experience feedback in a timely manner, and determined whether to continue to expand the release scope of the new version. After the version quality, stability, and user experience were fully verified through multiple rounds of phased release, the new version was fully released. 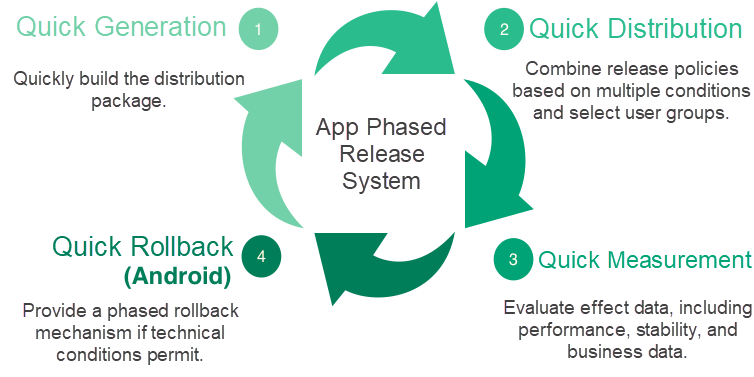 After the release scope was gradually expanded, more and more users updated the version. O&M personnel focused on online stability and user feedback for the new version and braced themselves for any unexpected problems.

Version stability monitoring, crash rate, operation response time, and user feedback are closely related to the usage conditions after a new version is released. Complex analysis and comparison and precise real-time monitoring may sound difficult, but the client developer Dingding performed these processes with just a PC and the EMAS system.

Dingding could easily complete these tasks because EMAS does much of the data processing work.

Two hours after the version was released, Dingding found that the crash rate exceeded 50% and alarms were generated. Then, Dingding, together with several R&D personnel, quickly checked and located the problem through data tracking and analysis. They then released a hot patch to quickly rectify the problem without the users ever being aware of it. Only four hours passed from when Dingding found the abnormal crash data to when the problem was solved.

That gave Dingding plenty of time for a cup of coffee in the sunshine.

On the fifth day, the project entered the operation phase. Engineers started to prepare for IWD activities. After multiple rounds of verification in the R&D, test, and release phases, they need to analyze user behavior for the upcoming IWD. Due to the epidemic, people are quarantined at home and eager to shop online. How should they classify users? How can they evaluate whether an operation strategy is correct?

Operation personnel could only wait for IWD because all these questions require data.

The mobile data model of EMAS easily reflects the value of solutions implemented by operation personnel at each step based on data analysis, user behavior trajectories, order success rates, and repurchase rates. The user funnel model demonstrates optimization items in the product path. Then, the PM can start to think about optimization solutions for the next version and how to allow users to quickly find the products they want and enjoy an excellent online shopping experience and services.

Big data can demonstrate the advantages and disadvantages of the new version, whether the operation strategy is correct, and the preference changes of new and regular users. With an eye on big data, all the employees strive to improve.

With EMAS, Alibaba engineers completed the R&D, testing, phased release, monitoring, O&M, and operation of a new client version in one week without leaving their homes. This is the high-quality and efficient product lifecycle of Alibaba.

Alibaba engineers have already gotten used to this sort of project speed.

With this process system, tool platform, and project mechanism, almost all Alibaba development tasks can be completed smoothly and all projects can be planned in an orderly manner. EMAS focuses on mobile R&D and implements the culture, processes, concepts, and tools of Mobile DevOps. It is widely used in the Alibaba Group for the R&D and version release of hundreds of clients, such as Taobao Mobile, Tmall, DingTalk, Youku, Hema Fresh, Fliggy, Cainiao, and Tmall Genie.

A small change can increase the search rankings of a project. From project creation to release, it only requires the time needed to write a solution. This is not only agile development but also smart development. EMAS provides high efficiency to Alibaba and gives value and meaning to the wisdom of Alibaba engineers.

Let's use new weapons to improve remote R&D efficiency. Try the methods used by Alibaba engineers to empower your team and revitalize your products.

What Alibaba's Doing to Bring in the Future of Autonomous Driving