Jia Yangqing, a famous AI scientist, commented that "compared with general-purpose frameworks like TensorFlow and Caffe2 that cover both training and inference, MNN focuses on the acceleration and optimization of inference and solves efficiency problems during model deployment so that services behind models can be implemented more efficiently on the mobile side. This is actually in line with ideas in server-side inference engines like TensorRT. In large-scale machine learning applications, the number of computations for inference are usually 10+ times more than that for training. Therefore, optimization for inference is especially important."

How is the technical framework behind MNN designed? What are future plans regarding MNN? Today, let's have a closer look at MNN.

MNN has already been made an open-source project on GitHub. Follow the official WeChat account "Alibaba Technology" and enter "MNN" in the dialog box to learn more and obtain the GitHub download link to this project.

As shown in the preceding figure, MNN consists of two parts: Converter and Interpreter.

Interpreter consists of Engine and Backends. The former is responsible for loading the model and the scheduling calculation graph; the latter includes the memory allocation and the op implementation under each computing device. In Engine and Backends, MNN applies a variety of optimization schemes, including applying the Winograd algorithm in convolution and deconvolution, applying the Strassen algorithm in matrix multiplication, low-precision calculation, Neon optimization, hand-written assembly, multi-thread optimization, memory reuse, and heterogeneous computing.

The following figures compare performance of popular open-source frameworks on MobileNet and SqueezeNet. 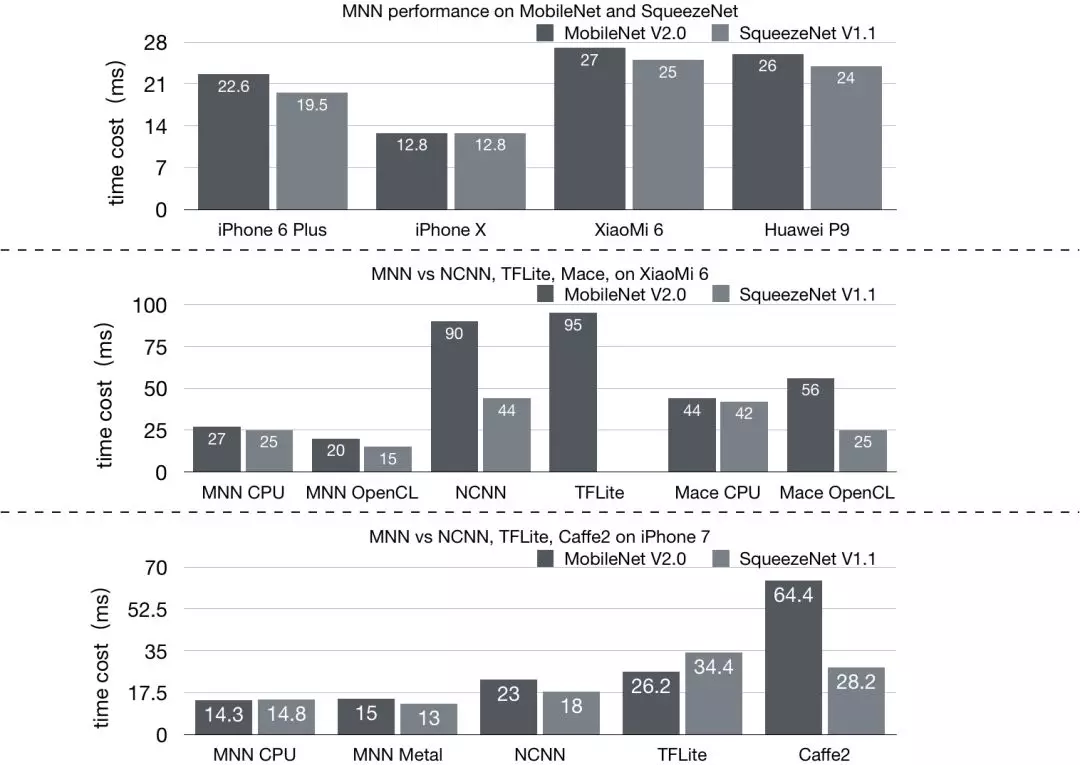 MNN shows over 20% better performance than NCNN, Mace, TensorFlow Lite, and Caffe2. We actually focus on optimizing our internal business models and has made in-depth optimizations for models like face detection. Detecting a single frame on iPhone6 only takes about 5 ms.

Note: Mace, TensorFlow Lite, and Caffe2 all use the master branch of the GitHub repository as of March 1, 2019. Due to compilations, NCNN uses the pre-compiled library released on December 28, 2018.

4.1 Why do we work on inference on mobile devices?

Generally, deep learning on mobile devices can be divided into the following stages:

4.2 Why did we make MNN an open-source project?

Before we started our engine R&D work in early 2017, we had researched system solutions and open-source solutions quite thoroughly and conducted in-depth analysis from the perspective of versatility, lightweightness, performance, and security. CoreML is a system framework used across Apple products. MLKit and NNAPI are two system framework used on Android. The biggest advantage of system frameworks is lightweightness: System frameworks have a relatively low package size restriction. The biggest disadvantage of system frameworks is versatility. CoreML only supports iOS 11+, and MLKit and NNAPI only supports Android 8.1+. These system frameworks apply to only a highly limited range of device models and barely support scenarios where embedded devices are used. In addition, system frameworks only support a relatively small number of network types and op types. They have poor scalability and cannot make full use of the computing power of devices. Model security is another big issue for system frameworks. All the preceding disadvantages indicate that system frameworks are not a good choice. As to open-source projects, TensorFlow Lite was announced but has not been released yet. Caffe is a relatively mature project, but it is not designed and developed for mobile scenarios. NCNN is a recently released project, which is not mature enough. The final conclusion was that we cannot find a simple, efficient and secure mobile-side inference engine that targets different training frameworks and deployment environments.

Therefore, we decided to develop a simple, efficient and secure mobile-side inference engine that can be used in different business algorithm scenarios, different training frameworks, and different deployment environments. The engine is known as MNN later. MNN eliminates the limits imposed by different operating systems (Android and iOS), devices, and training frameworks. It supports fast deployment on mobile devices and allows flexible addition of ops and in-depth performance optimization on CPUs and GPUs based on business models.

Projects such as NCNN, TensorFlow Lite, Mace, and Anakin gradually become open source and get continuously upgraded over time, providing us with good input and meaningful reference. We are also continuously making iterations and optimizations of MNN as our business requirements grow. MNN has been proven in Double 11 events and is relatively mature and full-fledged. Therefore, we decided to make MNN an open source project so that it can benefit more application and IoT developers.

At present, MNN has been integrated into 20+ apps, including Mobile Taobao, Maoke, Youku, Juhuasuan, UC, Fliggy, and Qianniu. It is currently applied in business scenarios such as image search-based online shopping (Pailitao), live short videos, interactive marketing, real-name authentication, trying on makeup, and search recommendation. Currently, MNN runs more than 100 million times each day. During the 2018 Double 11 event, MNN was used in scenarios like smiley face red envelopes, scans, and a finger-guessing game.

Pailitao is an image search and recognition feature in Mobile Taobao. Since its first release in 2014, Pailitao has become an application with more than 10 million UVs over years of development. Technologies behind this feature are also continuously evolving and developing. Originally, to search an item, a photo was taken of an item and then uploaded to the cloud for image recognition. Currently, object recognition and picture editing are first performed on the mobile side and the edited pictures are uploaded, significantly improving the user experience and reducing the computing cost on the server side. Currently it supports recognizing common simple objects and logos in real time by using mobile-side models.

Smiley Face Red Envelopes was the first show performed on the 2018 Tmall Double 11 evening gala. This performance was based on real-time face detection and emotion recognition. Compared with interactive events based on screen touch, this show was a typical example of the transformation from tradition interaction through screen touch to natural interaction by using real-time facial detection and recognition algorithms in the camera. IT brings users a new experience.

Jiwufu (collection of five Fu cards) was one of Chinese new year campaigns in 2019. It was the first time that Mobile Taobao participated in this campaign by scanning goods for the Chinese new year. By scanning the red-colored goods purchased for the Chinese new year, people can obtain Fu cards and have a chance of winning physical rewards including duvets, Wuliangye, Maotai, and king crabs as well as Tmall supermarkets and Tmall Gene coupons with no threshold.

We plan to release a stable version every two months. Our current roadmap is as follows:

Cross-Chain Interaction and Continuous Stability Based on SimpleChain Beta

thanks for sharing great information with us such a great postHow Angular is Working?https://www.sevenmentor.com/angular5-training-institute-in-pune.php