1,635 0
This article introduces the EPaxos algorithm in a simple and easy-to-understand way, suitable even for those with basic knowledge of Paxos or Raft algorithms.

EPaxos (Egalitarian Paxos) is a high-profile next-generation and distributed consistency algorithm with broad application prospects in the industry. However, throughout the industry, there has been no project based on EPaxos, or even an article that introduces EPaxos in layman's terms. Although the theory of EPaxos algorithm is good, it is difficult to understand, and also has many challenges in implementation. The practical application of EPaxos algorithm is not quite ready yet.

This article aims to introduce the EPaxos algorithm in a simple and easy-to-understand way for everyone, even for those with only basic knowledge of Paxos or Raft algorithms. It introduces EPaxos from Paxos, describes the basic concepts and intuitive understanding of EPaxos, and provides relative information for detailed introduction of EPaxos algorithm in other two articles. Reading this article requires some background in consensus algorithm such as Paxos or Raft.

Let's start with Paxos. Paxos can be seen as the prototype of distributed consistency algorithm that tolerates the simultaneous failure of F replicas among 2F+1 replicas.

Generally, Paxos requires at least two phases to reach a value: the preparation phase and the acceptance phase.

The process of using Paxos to reach a consensus on a series of values is shown in Figure 1. Three replicas are identified by different colors, and A, B, C, D are their proposed values. They compete for each instance and propose their own values: 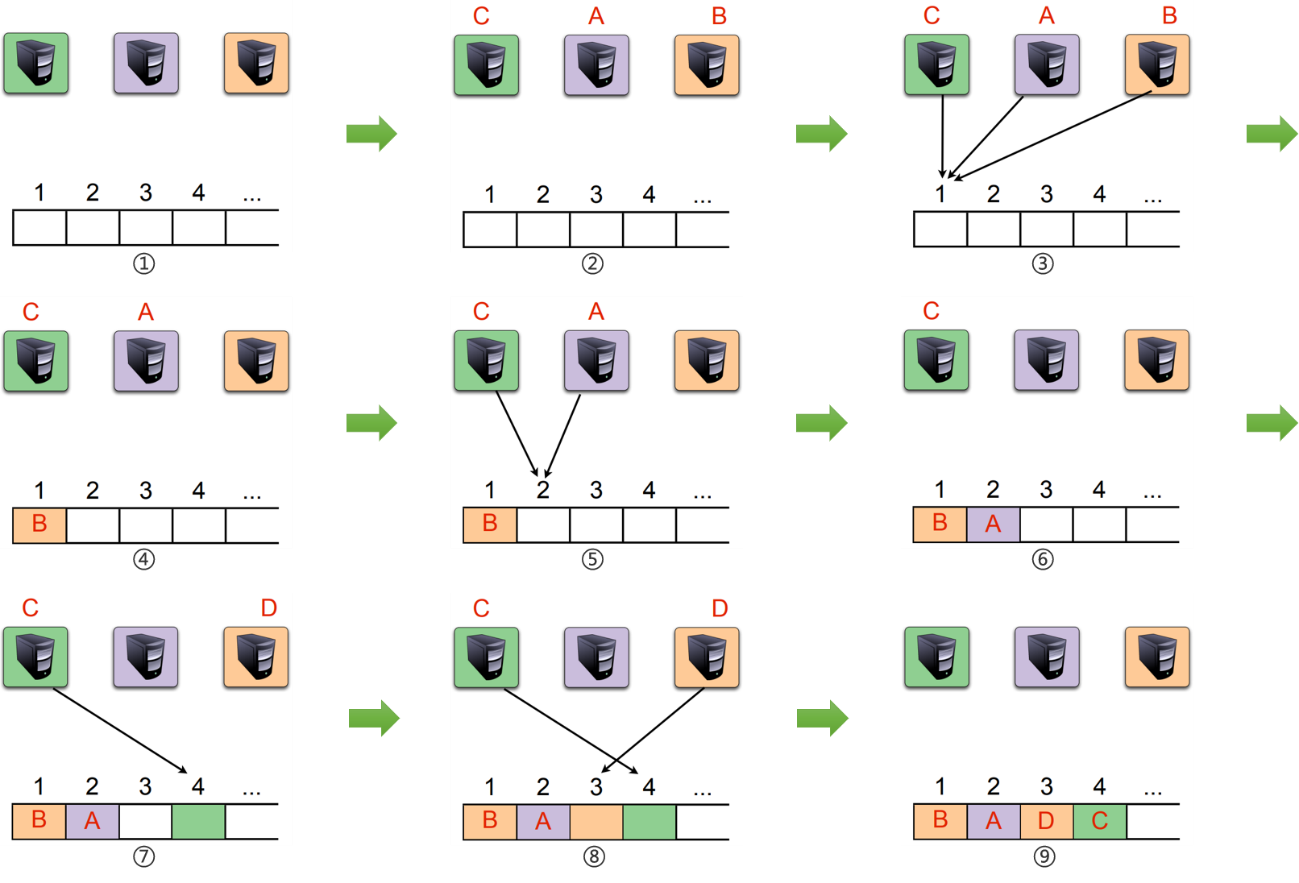 Paxos requires at least two network trips to reach a value. More network trips may be required in concurrent cases, and in extreme cases even a livelock may be formed, which is inefficient in the process. To solve these issues, Multi-Paxos came into being.

Multi-Paxos elects a leader among replicas to initiate the proposal. Since there is no competition, the livelock issue is solved. In addition, the preparation phase can be skipped to improve the efficiency.

The process of using Multi-Paxos to reach a consensus on a series of values is shown in Figure 2. Three replicas are identified by different colors. First, the green replica is elected as the leader. Then, four values of A, B, C, and D are proposed by the leader on by one:

The first step for Multi-Paxos is to elect a leader, and then the proposal right of instance all belongs to the leader without competition. Therefore, the preparation phase can be omitted, and only one phase is needed. By electing a leader, the efficiency of reaching values is improved. However, the leader also becomes a bottleneck in performance and availability.

The leader needs to process more messages than other replicas, so the load on each replica is unbalanced with low resource utilization. Moreover, the system is unavailable when the leader goes down, and cannot be restored until a new leader is elected. This reduces availability.

Under the basic Paxos, each replica can propose and supports high availability, but competitions and conflicts of replicas can cause low efficiency. Multi-Paxos, however, elects a leader to avoid conflict and improve efficiency, but the leader may become a bottleneck, which reduced availability. EPaxos is developed to solve the issue of balancing efficiency and availability. Unlike Multi-Paxos, EPaxos directly deals with and tries to solve conflicts in another way.

EPaxos is a leaderless consistency algorithm and allows any replica to send proposes. Generally, reaching a value only requires one or two network trips.

EPaxos has no leader election cost. When one replica becomes unavailable, other replicas can be accessed immediately, achieving higher availability. In addition, each replica is load balanced without leader bottleneck and has a higher throughput. Users can also choose the nearest replica to provide services, reducing latency in cross-available-zone and cross-regional scenarios.

The process of using EPaxos to reach a consistency on a series of values is shown in Figure 3. Three replicas are identified by different colors. Each replica has its own instance space and proposes its own value. A, B, C, D are their proposed values. Each instance reaches a consistency on values as well as the relative order with other instances. The Tarjan algorithm is a recursive algorithm that generally used to find strongly connected components. However, in the practical pressure tests, the recursive implementation is easy to cause stack overflow, which brings certain challenges to applications.