Alibaba Cloud demonstrated its self-developed PolarDB database with up to 1,000,000 QPS to European technical experts for the first time at the International Conference on Data Engineering (ICDE) in April 2018. The release of new database falls in line with Alibaba Cloud's efforts towards establishing cloud-native databases as a standard in the industry.

According to Alibaba Cloud's Database Architect Cai Songlu, with the hardware and software of the new 3DXpoint storage media, NVMe SSD, and RDMA, PolarDB can implement the shared storage among nodes and horizontal scalability in just a few seconds. The database can also support seamless scaling up to 100 TB, 2-minute read-only replica scaling, and 1-minute full backup. In standard scenarios, PolarDB has six times higher performance than MySQL, can provide one million QPS, and 100 TB in one single table. Perhaps the best part of all is that all these features come at a cost ten times lower than that of other commercial databases.

In the recent years, exponential data growth and data diversification have led to diversified database needs. In addition to database performance, users now focus more on how to bring offline service data online, how to make services available to customers in real-time, and how to reduce operations cost, and O&M workloads.

At ICDE held this year, Alibaba Cloud innovatively applied the PAXOS algorithm. Therefore, the new-generation POLARDB database can ensure consistency as well as implement error tolerance of nodes. "Instead of the relationship between 0 and 1, the difference between 99% and 100% should be the core of the CAP theorem. Cloud databases will implement perfect CAP balance, just like the Chinese martial art Tai Chi," Cai Songlu said. Additionally, there are other scenarios in China where Alibaba Cloud has played a vital role; this includes the 12306 Online Ticketing System with 40 billion visits at peak time, the Double 11 Shopping Festival during which various systems process 320 thousand trades every second, and the ET City Brain program which makes urban transportation easier and smoother.

Being one of China's representative breakthroughs, cloud computing is now changing the way of life for people in China. 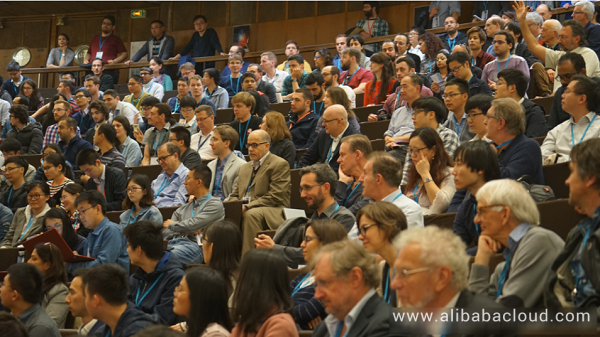 In 2016, Alibaba Cloud established its first European data center in Frankfurt, Germany. This data center enables Alibaba Cloud to gain increasing momentum in the European market. A growing number of enterprises and organizations have started utilizing Alibaba Cloud services to create their technology ecosystems, including Vodafone and Met Office in the UK. Currently, Alibaba Cloud has 47 zones in 18 countries worldwide, establishing its preliminary coverage of global infrastructure.