On May 27, the International Symposium on High Performance Computer Architecture (HPCA) hosted by IEEE announced its latest Hall of Fame inductees, and Alibaba Cloud scientist Jiang Xiaowei was one of them. He is the first researcher from the cloud computing industry to be inducted and the second scientist from Alibaba who has achieved this distinction. ISCA, HPCA, and MICRO are the three most prestigious international computer architecture conferences. They have promoted development of multiple computer system technologies over the past 26 years, including the SMT technology in the late 1990's, the virtualization technology in 2005, and the NVM technology in 2010. HPCA is extremely strict with papers, and only 15% of submitted papers are selected on average. Previously, only five Chinese researchers have received this honor, including Jiang Xiaowei's colleague Xie Yuan. 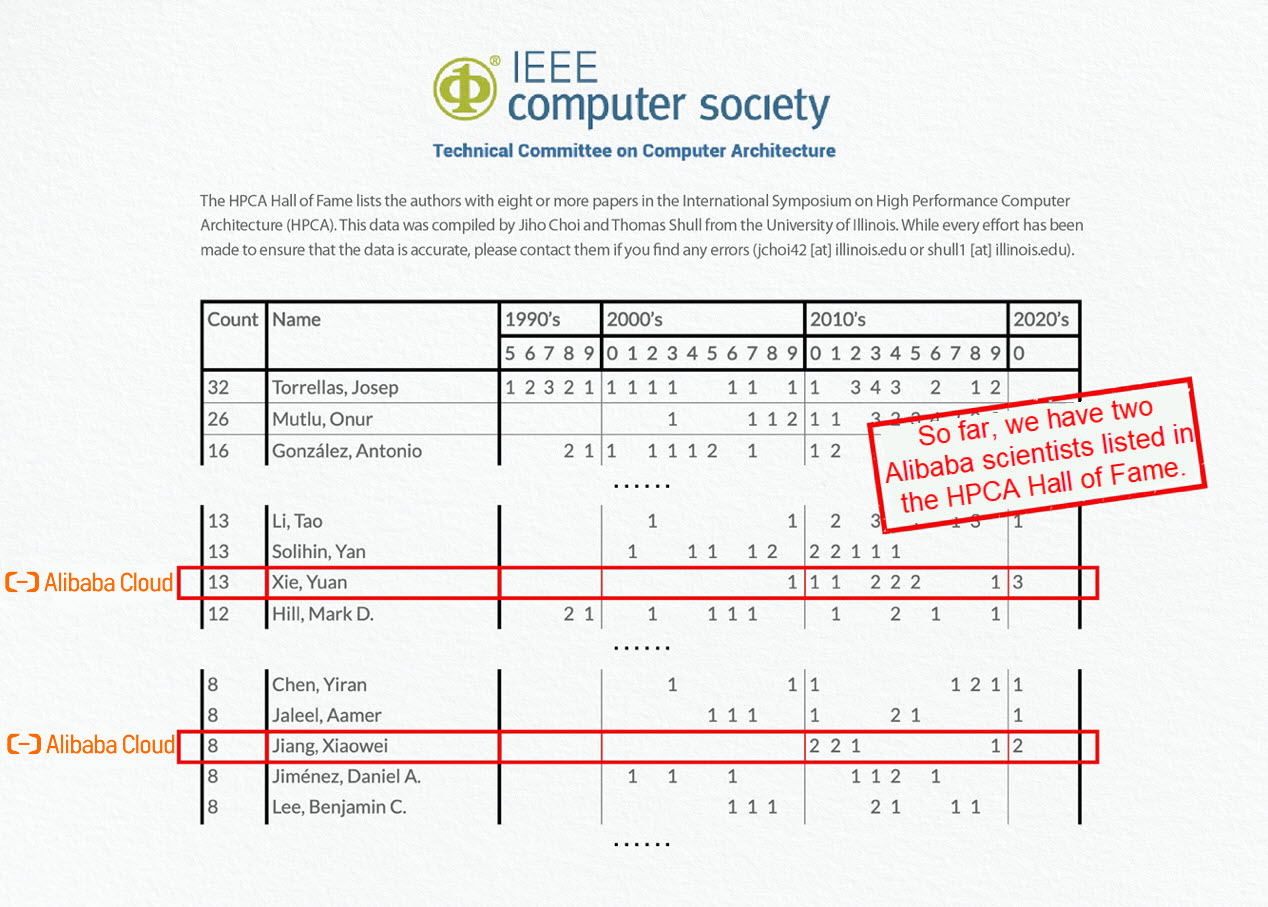 Jiang Xiaowei received his doctorate in Computer Engineering from North Carolina State University in 2009 and joined Alibaba Cloud Server R&D team in 2014. His research covers CPU architecture, server R&D, software benchmarking and profiling, as well as networking technology. After joining Alibaba, he led the first x86 CPU customization project in China. Under his leadership, Alibaba became the first tech firm in China to succeed in customizing CPUs. So far, Alibaba has deployed their in-house servers with customized fourth-generation CPUs at scale.

In his latest paper accepted by HPCA, Jiang Xiaowei introduced their approach on building the online tracing infrastructure for data center workloads. Such capability has enabled his team to systematically capature the microarchitectural characteristics of online workloads, and thus enabled various opportunities in hardware and software optimizations. In the paper accepted by HPCA last year, Jiang Xiaowei and his R&D team have also identified the six bottlenecks that limit graph computing on CPU architecture and proposed corresponding optimization solutions. This lays a theoretical foundation for graph computing-oriented chip architecture and server system architecture design in the future.

These technological innovations are being applied to various fields. Alibaba Cloud provides technical services including cloud computing, artificial intelligence, and smart networking to users in over 200 countries and regions around the world; and serves more than half of Chinese A-share listed companies and 80% of Chinese tech firms. As of 2019, all Alibaba core systems have been migrated to the cloud, enabling Alibaba to successfully handle the peak traffic of the Double 11 Shopping Festival. Alibaba AI is called more than 1 trillion times daily and serves more than 1 billion people around the world...

Alibaba's technical development is determined by talented resources, and more than 60,000 scientists and engineers form Alibaba's technical base. About one third of the 38 Alibaba Group partners are technical experts, and 60% of Alibaba's 100,000 employees are technical professionals. Dozens of them have received honors such as Academician of Chinese Academy of Sciences, fellowship of top-level associations, and distinguished scientist, including more than ten IEEE Fellows and more than 30 internationally renowned university professors.

Since 2009, Alibaba has been focusing on the development of its own Apsara cloud operating system. With over a decade of exploration, Alibaba cloud has transformed cloud computing in China from the ground up to a leadership position. Over the past two years, Alibaba has ushered in an era of real technological boom, and has made significant achievements in various fields, such as chip, server, quantum computing, blockchain, and IoT. Alibaba has become the tech firm with the most comprehensive technological ecosystem and the deepest technology accumulation in China.

Tutorial about Setting Up Server Manager on Ubuntu 18.04