By Wangde, a Senior Database Development Engineer at Alibaba Cloud

First, let's understand what a transaction really means. To implement complex semantics, databases allow users to flexibly perform add, delete, modify, and query operations. In many scenarios, a set of operations takes effect as a group which is called a transaction. A transaction is the basic unit of database status changes, and it contains one or more operations (such as multiple SQL statements).

Either all or none of these operations take effect. If an error occurs during transaction execution, all operations that have been performed are withdrawn. This is called the atomicity of transactions.

If some operations cannot be withdrawn after a failure occurs, the database enters an incorrect state. For example, an error occurs when 100 RMB has been deducted from account A but the balance of account B does not increase, and if the deduction operation fails to be withdrawn, 100 RMB is lost. Atomicity can be achieved through logging (values before changes). Some databases cache transaction operations locally. In case of a failure, the cached operations are directly discarded.

After the transaction is committed, the result cannot be changed. Even if the system breaks down, the database status after restart will still be consistent with that before downtime. This is called the persistence of transactions.

As long as data is stored on non-volatile storage media, downtime will not cause data loss. Therefore, the following methods are used to ensure data persistence:

Generally, the second method is used.

Databases reflect the real world, so they must impose the restrictions we face in the real world. For example, whatever transfers are made between accounts, the total balance cannot change; age cannot be negative; and genders can only include male, female, and transgender. These constraints cannot be omitted during transaction execution in order to ensure that a transaction changes from one correct status to another correct status. This is called the consistency of transactions.

To ensure transaction isolation, all transactions are executed in sequence so that transactions do not interfere with each other. However, the efficiency of serial execution is very low. To increase throughput and reduce RT, a database usually allows multiple transactions to run simultaneously. Therefore, the concurrency control module needs to ensure serializability, which ensures the effects of concurrent execution and serial execution are the same, in order to meet the isolation requirements.

For example, when T1 and T2 are executed at the same time, the schedule may be as follows:

This equivalence judgment method is called conflict equivalent. Schedules are conflict equivalent when conflicting operations in the two schedules are executed in the same sequence. As shown in the following figures, T1 write(A) conflicts with T3 read(A), and T1 is executed before T3; T1 read(B) conflicts with T2 write(B), and T2 is executed before T1. Therefore, the schedule in the first figure below is equivalent to the serial schedule (in the sequence of T2, T1, and T3) in the second figure below. The execution sequence in the first figure below meets the requirements of conflict serializability. 2) Concurrency Control Based on 2PL

The easiest way to ensure that operations are performed in the correct order is to lock the access object. The lock manager of the database system locks and releases locks for access objects, ensuring that only transactions with locks operate on the corresponding objects. Locks are divided into S-Locks and X-Locks. S-Locks are shared locks for read requests and X-Locks are exclusive locks for write requests. Only when two read requests are compatible with each other can operations be executed on the same object at the same time. Read-write and write-write operations are executed in sequence due to lock conflicts. Two-phase locking (2PL) is the most common lock-based concurrency control protocol in databases. It consists of two phases:

Phase 1 - Growing: A transaction requests all the locks it needs from the lock manager (locking may fail).

Why locking and lock releasing are implemented in two phases?

2PL-based concurrency control aims to achieve serializability. If the concurrency control module does not apply for all the required locks in advance but can apply for locks again after locks are released, an object may be modified by other transactions in the interval of two operations on the object (as shown in the following figure). In this case, conflict serializability cannot be achieved, and inconsistencies may occur. The following is an example of an update loss. Is 2PL the only way to guarantee transaction consistency and isolation? Let's take a look at the example in the following figure. 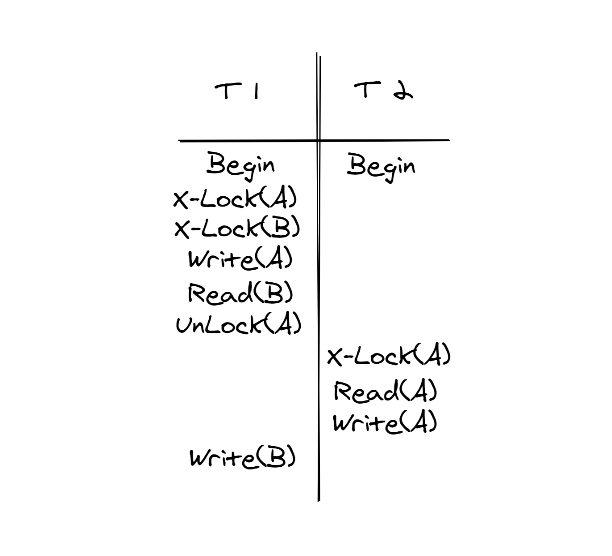 The execution sequence in the figure complies with 2PL, but T2 reads uncommitted data. If T1 rolls back at this time, it will trigger a cascading rollback (changes of T1 must be shielded from all transactions). Therefore, databases often use strong strict two-phase locking (SS2PL). Unlike 2PL, SS2PL is used to release locks only after a transaction is executed in the Shrinking phase, which prevents uncommitted data from being read.

If there are only row locks, the transaction needs to acquire 0.1 billion row locks to update 0.1 billion records, which will consume a large amount of memory.

Locks are used for protecting access objects, such as attributes, tuples, pages, and tables, in databases. Locks are divided into row locks, page locks, and table locks. No one implements locks for attributes and smaller objects. In an online transaction processing (OLTP) database, the minimum operating unit is a row. The fewer locks a transaction needs to acquire, the better. For example, maybe one table lock is enough to update 0.1 billion records.

The following figure shows the compatibility relationship between intention locks and ordinary locks. When IX is enabled for a table, some rows in the table are being modified.

TTS must be greater than RTS(X) to prevent the read and write conflicts. When the timestamp of a read request is RTS and record X has been read, RTS(X) is set to RTS. If the TTS of the new transaction is less than RTS(X) and the update succeeds, the update is visible after the RTS read request reads the record again, which violates repeatable read. The latest read and write timestamp is stored in the record, ensuring conflict serializability.

This method has the following defects:

Assume that there are only two transactions T1 and T2, they modify the same rows of data, and the timestamp of T1 is less than that of T2 (T1 is executed before T2).

The database maintains multiple physical versions of a record. During data writing in a transaction, a new version of written data is created. Read requests obtain the latest version of data based on the snapshot information at the beginning of the transaction or statement. When this method is used, writing does not block reading, and reading does not block writing. Read requests will never fail (such as in single-version T/O) or wait (such as in single-version 2PL) due to such conflicts. In databases, read requests generally outnumber write requests. Therefore, almost all mainstream databases use this optimization technology.

1) In the append-only mode, the data of old and new versions are stored in the same tablespace, for example, a storage engine based on Log-Structured Merge-Tree (LSM Tree).
2) The primary tablespace records data of the latest version, and pre-images are recorded in other tablespaces or data segments. For example, multiversion information about InnoDB is recorded in undo logs. The recycling of multiversion data is also called garbage collection (GC). Earlier-version records that cannot be obtained by any read requests should be deleted promptly.

An In-depth Discussion on the LSM Compaction Mechanism