Virtual Private Cloud (VPC) supports the traffic mirroring feature. You can use this feature to mirror network traffic that flows through an elastic network interface (ENI) based on specified filters. The traffic mirroring feature allows you to mirror network traffic from an Elastic Compute Service (ECS) instance that is deployed in a VPC and forward the traffic to a specified ENI or internal-facing Server Load Balancer (SLB) instance. You can use this feature in scenarios such as content inspection, threat monitoring, and troubleshooting. 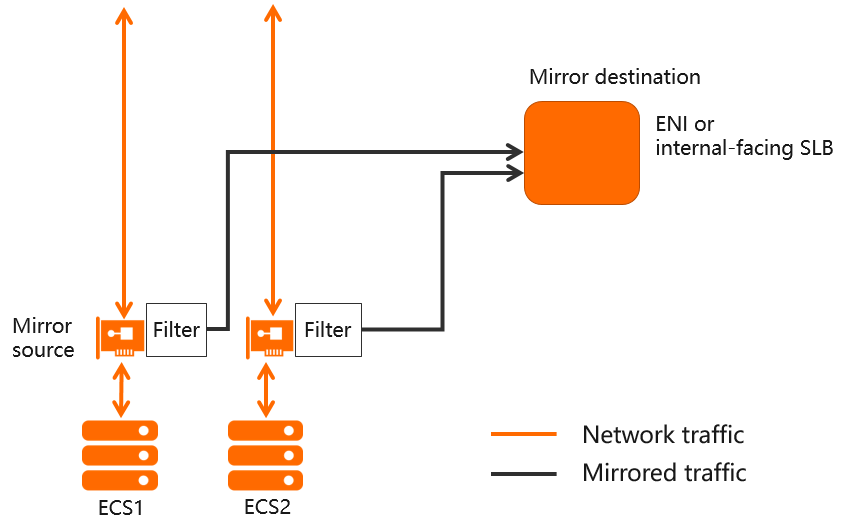 You can specify inbound and outbound rules in filters. When you create a traffic mirror session, you can associate the session with a filter. After the traffic mirror session is created and enabled, all network traffic that matches the filter is mirrored. Five parameters are used to specify the inbound and outbound rules in filters: source CIDR block, source port, destination CIDR block, destination port, and protocol.

For example, you can set the parameters to the following values for an inbound rule: source CIDR block to 192.168.0.0/16, source port to 10000, destination CIDR block to 10.0.0.0/8, destination port to 80, and protocol to TCP. After the configuration is complete, the traffic mirror session mirrors the network traffic that is transmitted to the specified ECS instance based on the specified information.

Total fee = Instance fee + Data mirroring fee The following table describes the unit prices of the billable items:
Note You are not charged a data mirroring fee before June 30, 2022.
For example, traffic mirroring is enabled for five ENIs that are deployed in a VPC in Silicon Valley Zone B. The traffic mirror sessions are active 24 hours per day for 30 days, and the total amount of mirrored data is 20 GB. In this case, the fees are calculated by using the following formulas:

Previous: Query traffic between VPCs Next: Work with traffic mirroring