The following figure is extracted from the official documentation of MongoDB. It shows a typical MongoDB replica set that contains one primary node and two secondary nodes. 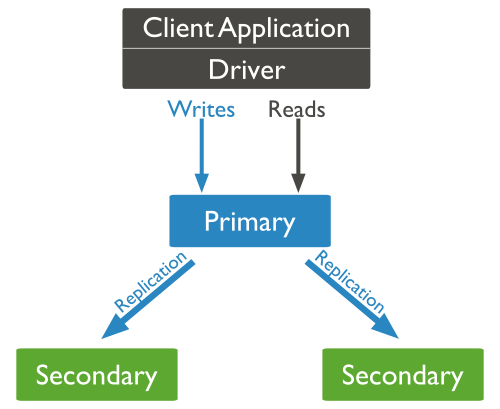 A replica set is initialized by running the replSetInitiate command or running the rs.initiate() command in the mongo shell. After the replica set is initialized, the members send heartbeat messages to each other and initiate the primary node election. The node that receives votes from a majority of the members becomes the primary node and the other nodes become secondary nodes.

A primary node election is triggered not only after replica set initialization but also in the following scenarios:

To prevent unlimited growth in the size of the oplog, local.oplog.rs is configured as a capped collection. When the amount of oplog data reaches the specified threshold, the earliest entries are deleted. All operations in the oplog must be idempotent. This ensures that an operation produces the same results regardless of whether it is repeatedly applied to secondary nodes.

The following code block is a sample oplog entry, which contains fields such as ts, h, op, ns, and o:

You can modify a replica set by running the replSetReconfig command or running the rs.reconfig() command in the mongo shell. For example, you can add or delete members, and change the priority, vote, hidden, and delayed attributes of a member.

For example, you can run the following command to set the priority of the second member in the replica set to 2:

Roll back operations on the primary node

The former primary node writes the rollback data to a dedicated directory. This allows the database administrator to run the mongorestore command to restore operations as needed.