This topic describes how to connect Log Service with Jaeger.

Containers and serverless programming improve efficiency in software delivery and deployment. The evolution of the standard architecture includes the following changes:

The standard architecture becomes more elastic due to these changes. However, these changes also pose more challenges to operations and maintenance (O&M) and diagnostics. To address this issue, a series of development and operations (DevOps)-oriented diagnostic and analysis systems emerge. These systems include centralized logging systems, centralized metrics systems, and distributed tracing systems. The preceding information allows you to classify the existing systems. For example, Zipkin is a tracing system, and Prometheus is a metrics system and will integrate more and more tracing features. More and more systems will focus on logging and integrate more features of other fields. These systems include ELK and Alibaba Cloud Log Service. The aim is to approach the intersection area, as shown in the preceding figure.

The following tracing systems are well-known:

After the system collects and stores the data, the distributed tracing system can be used to generate a timing diagram that contains a timeline. However, during data collection, the system obtains user code in an intrusive manner and the API operations of different systems are incompatible. This poses a significant challenge if you switch tracing systems.

The OpenTracing standard was introduced to prevent API compatibility issues among different distributed tracing systems. OpenTracing is a lightweight standardization layer. This layer is located between applications or class libraries and tracing or log analysis programs.

For more information about the tracers that are supported by OpenTracing, see OpenTracing. Popular OpenTracing tracers include Jaeger and Zipkin.

Jaeger is an open-source distributed tracing system that is provided by Uber. This system is compatible with the OpenTracing API. Jaeger consists of the following components, as shown in the preceding figure.

Jaeger on Alibaba Cloud Log Service is a Jaeger-based distributed tracing system that stores tracing data to Log Service for persistent storage. The tracing data can be queried and displayed by using the Jaeger API. 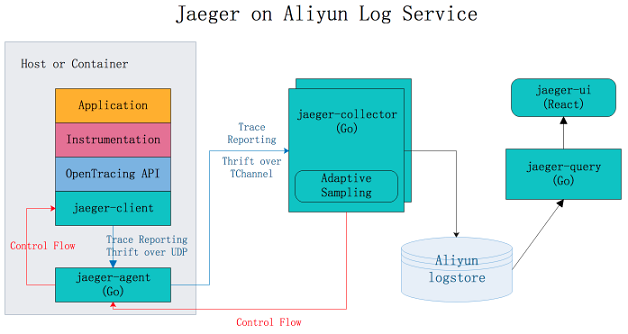 For more information about how to configure Jaeger on Alibaba Cloud Log Service, visit GitHub.

Previous: Customize the UI of embedded pages Next: Connect to Log Service by using JDBC