Enhanced cloud-edge networking is developed based on the Software Defined Network (SDN) solution of ACK@Edge. An edge node can connect to a Cloud Connect Network (CCN) instance through the nearest access point in the global transmission network of Alibaba Cloud. The CCN instance can communicate with virtual private clouds (VPCs) that are connected to the same Cloud Enterprise Network (CEN) instance. This connects the cloud and edge. This topic describes how an enhanced edge node pool works and how to create an enhanced edge node pool.

Enhanced cloud-edge networking is based on the SDN solution of ACK@Edge and the global network infrastructure of Alibaba Cloud. It enables reliable and secure communication between the cloud and edge. After you create an enhanced edge node pool and add edge nodes to the node pool, the gateway components are automatically installed in pods on edge nodes. The gateway components enable edge nodes to connect to CCN instances through the nearest access points. The CCN instances can communicate with the VPCs that are connected to the same CEN instance. This connects the cloud and edge. In enhanced mode, data exchanged between the cloud and edge is encrypted. Data is transmitted over the internal network of Alibaba Cloud. This ensures the efficiency and security of data transmission. In addition, edge nodes can access services that are deployed in VPCs. 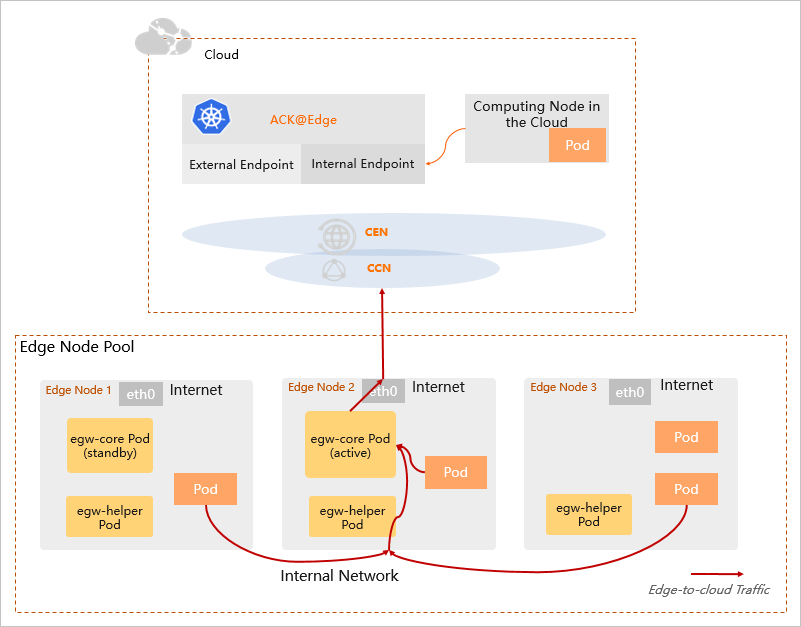 Annotations for an edge node pool

Previous: Add nodes to an edge node pool Next: Use the UnitedDeployment controller to deploy applications