If your code does not run as expected, you must locate the cause. To locate the cause, you can carefully check the code. You can also enable the debug logging feature and use an online debugging tool to check the variables and logic of the code based on debug logs. This topic describes how to use WebIDE of Data Science Workshop (DSW) to debug the Python code in the sample notebook that is provided by DSW of Machine Learning Platform for AI (PAI).

DSW provides a few examples to demonstrate how to tune hyperparameters by using AutoML. The code in the example "Quick start to hyperparameter tuning by using AutoML" is often stuck at the tuner.fit() method. The following figure shows the error logs in an output cell of the sample notebook. 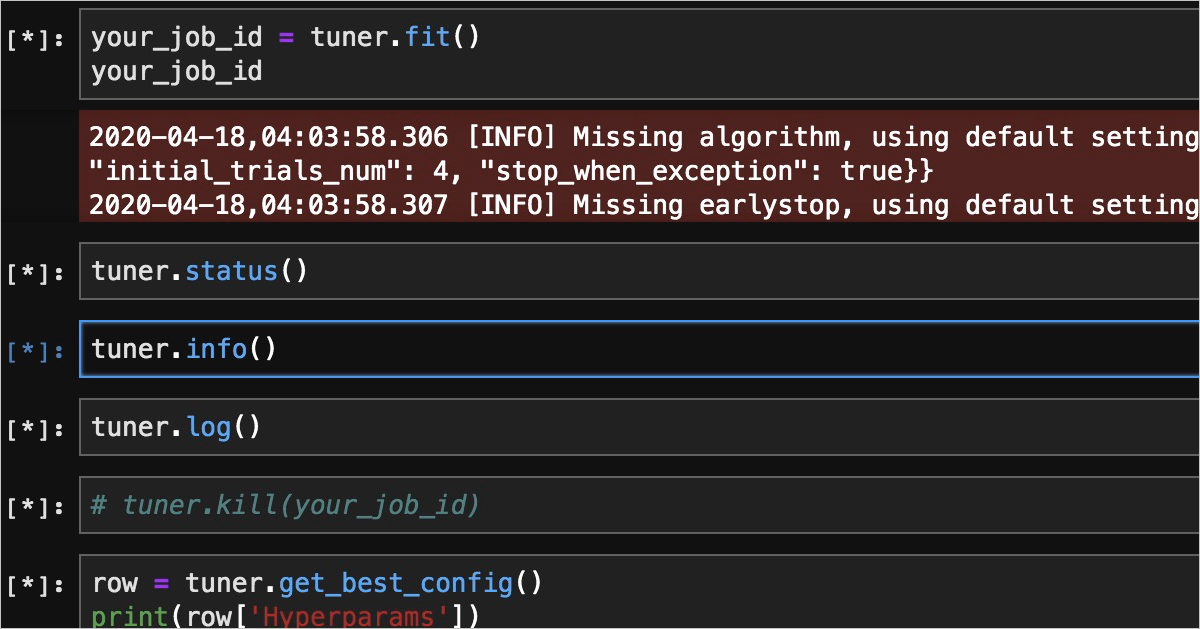 The error logs do not provide enough information for you to locate the cause. You can check the code of tuner and debug the code. To check the code of tuner, perform the following steps: Combing all of the code is time-consuming. You can use a debugger to set a breakpoint at the position where the code is stuck. This helps you diagnose issues. You can use WebIDE to debug programs that are run inside or outside WebIDE. To debug a program that is run outside WebIDE, you must add the Python Tools for Visual Studio Debug Server (PTVSD) code to the program. After the PTVSD code is added to a program, the program is paused at the PTVSD code until a debugger is attached to the program. In this topic, the code in the sample notebook is run in JupyterLab and WebIDE is used to debug the code step by step.

Previous: Export notebooks Next: Use CNN to classify images