45,614 0
The new FPGA-accelerated X-DB is turning heads for its path-breaking performance. This article throws some light on its research and development work.

11.11 The Biggest Deals of the Year. 40% OFF on selected cloud servers with a free 100 GB data transfer! Click here to learn more.

X-Engine is a new generation storage engine developed by Alibaba Database Department and is the basis of the distributed database X-DB. To achieve 10 times the performance of MySQL and 1/10 the storage cost, X-DB combines software with hardware to make full use of the most cutting-edge technical advantages in both software and hardware fields.

FPGA acceleration is our first attempt in the custom computing field. At present, the FPGA-accelerated X-DB has been subject to small-scale online grayscale release. FPGA will assist X-DB in the 6.18 and Double 11 shopping carnivals this year and will meet Alibaba's business departments' high database performance requirements.

To meet Alibaba's stringent requirements on performance and cost, we have designed a new storage engine; it is called X-Engine. We have used many cutting edge database technologies in X-Engine; these include highly-efficient memory index structures, asynchronous write assembly-line processing mechanism, and optimistic concurrency control for in-memory databases.

To achieve the best write performance and facilitate the separation of cold and hot data for tiered storage, X-Engine has borrowed the design of LSM-Tree. X-Engine maintains multiple memtables in its memory. It appends all newly written data to these memtables, rather than directly replacing existing records. As the data storage is relatively large, it is impossible to store all data in memory.

Based on the characteristics of data access, X-Engine applies tiered storage to persistent data, where we store active data in relatively high data layers, and merge less active data (seldom accessed) with base-layer data and store it in the base-layer. It compresses base-layer data at a high compression rate and migrates it to storage media featuring large capacity but the relatively low price (such as SATA HDDs) to achieve the goal of storing a large quantity of data at a relatively low cost.

In this case, tiered storage creates a new problem: the system must frequently compact data, and the larger number of data writes requires more frequent compaction processes. Compaction is a compare & merge process which requires high consumption of CPU and storage I/O. In high-throughput write cases, a large number of compaction operations will occupy a large number of system resources. This can surely cause the performance of the entire system to drop tremendously thus leading to a huge impact on the application system.

The completely new X-Engine has extraordinary multi-core expansion capability to achieve very high performance. Its front-end transaction alone can almost completely consume all CPU resources, and it has a much higher resource using efficiency than InnoDB. We have shown the comparison between the two in the following figure: 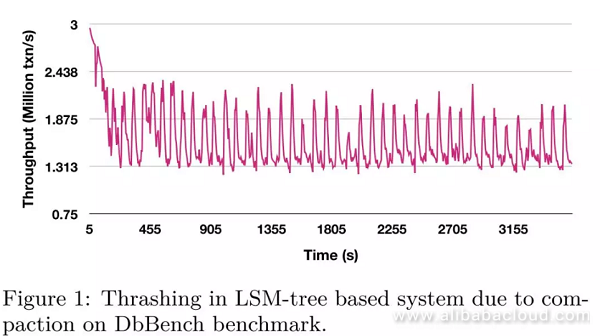 However, if we do not conduct compaction promptly, the accumulation of multi-version data can seriously affect the read operations.

To solve the performance jitter caused by compaction, academic experts have put forward many structures such as VT-tree, bLSM, PE, PCP, and dCompaction. Although these algorithms can optimize the compaction performance across multiple aspects, they cannot reduce consumption of CPU resources by compaction. Based on relevant research statistics, when using SSD storage devices, the computing operations of compaction in the system consumes approximately 60% of computing resources. Therefore, no matter what optimizations we implement for compaction in the software layer, for all LSM-tree based storage engines, performance jitter caused by compaction is always an Achilles' heel.

Fortunately, special hardware opens a new door for solving performance jitter caused by compaction. In fact, it has become a trend to use special hardware in solving traditional databases' performance bottlenecks. We have already offloaded database operations such as Select and Where to FPGA, and more complex operations such as Group By are under research. However, the current FPGA acceleration solutions have a couple of drawbacks:

To ease the impact of compaction on X-Engine's system performance, we have used an asynchronous hardware device FPGA, rather than the CPU to complete the compaction operation. This approach is crucial for a storage engine that satisfies stringent service requirements by maintaining the overall system performance at a high-level and avoiding performance jitters. Here are the major design features:

When memtable is full, it turns into an immutable memtable and then flushes to an SSTable to L0. Each SSTable contains multiple data blocks and one index block to index the data block. When it reaches the maximum number of L0 files, it triggers the merge of SSTables that have the overlapped key ranges; this process is called compaction. Likewise, when we reach the maximum number of SSTables at a layer, it merges with lower layer data. In this way, cold data constantly flows downward while hot data remains at a relatively higher layer.

For read operations, X-Engine needs to search for the required data from all memtables. If it fails to find the data in memtables, it searches in the persistence storage, from higher to lower layers. As a result, timely compaction operations not only shorten the read path but also save the storage space. However, this method uses a lot of system computing resources and causes performance jitter. This is an urgent problem that X-Engine must solve.

From the perspective of the existing FPGA accelerated databases' status quo, we can divide FPGA accelerated database architectures into two types; the bump-in-the-wire design and the hybrid design. In the early stage, because of the FPGA card's insufficient memory resources, the former type of architecture is relatively popular. In this architecture, we place FPGA on the storage data path and use the host as a filter. The advantage is that it requires zero data replication, while the drawback is that the acceleration operation must be a part of the streamlined process, therefore making it not flexible enough in terms of the design method. For X-Engine, handling of normal user requests is similar to that of LSM-tree-based storage engines:

When L0 reaches the maximum number of SSTables, compaction gets triggered. We can divide offloading of a compaction task into the following steps:

Compaction Units (CU) are the basic unit for FPGA to execute compaction tasks. An FPGA card can place multiple CUs, and each CU is composed of the following modules: A compaction process contains three key steps: decoding, merging, and encoding. The most significant challenge for designing a proper compaction pipeline is that the execution time for each step varies significantly. For example, because of parallel processing, the throughput of the decoder module is much higher than the encoder module. Therefore, we must suspend some fast modules to wait for downstream modules still in the pipeline. To match the throughput differences in each of the pipeline's modules, we have designed a Controller module to coordinate different steps in the pipeline. An additional benefit of this design is that it decouples each module in the pipeline and enables more flexible development and maintenance during engineering implementation. When integrating FPGA compaction into X-Engine we hope to have independent CU throughput performance; the baseline of the experiment is the CPU. We can draw the following three conclusions from the experiment: For FPGA compaction, the following three reasons can lead to the failure of compaction task:

To ensure the data is correct, the CPU will conduct computation again on all failed tasks. As we mentioned earlier in the fault tolerance mechanism, we have addressed a small part of compaction tasks that exceed the limits and have avoided the risk of FPGA internal errors. We compared the performance of two storage engines: In this article, the X-Engine storage engine accelerated by FPGA brings 50% performance improvement for the KV interface, and 40% performance improvement for the SQL interface. With the decrease in the read/write ratio, FPGA's acceleration effect becomes more obvious, thus meaning that FPGA compaction acceleration is suitable for write-intensive workloads. This is consistent with the intention of the LSM-tree design. Also, we have avoided FPGA's internal defects by designing a fault tolerance mechanism, and we've finally created a high-availability CPU-FPGA hybrid storage engine that meets Alibaba's real service requirements.

It is the first real project that uses a heterogeneous computing device introduced by X-DB to accelerate core database functions. Based on our experiences, FPGA can completely meet the computing demands raised by X-Engine's compaction tasks. At the same time, we have been researching to schedule more suitable computing tasks to FPGA for execution, such as compression, BloomFilter generation, and SQL JOIN operators. At present, the R&D for the compression function is completed, and it will be built into a set of IP together with Compaction to perform data compaction and compression operations simultaneously.

X-DB FPGA-Compaction hardware acceleration is an R&D project completed by three parties; these parties are respectively the Alibaba Database Department database kernel team, the Alibaba Server R&D Department custom computing team, and Zhejiang University. Xilinx's technical team has also made great contributions to the success of this project. We hereby extend our gratitude to them. We will post X-DB online for public beta this year. You will then be able to experience the significant performance improvement with FPGA acceleration to X-DB.

An Introduction to Core Machine Learning