22,224 0
AliOS Things is a light-weight embedded operating system for Internet of Things (IoT). Discover how AliOS Things safeguards the integrity of IoT netwo...

AliOS Things is a light-weight embedded operating system for Internet of Things (IoT). It contains a multitude of components with high capabilities and is convenient for further developments. AliOS Things supports devices that connect to Alibaba Cloud Link, integrates the cloud, and can be applied to real-life applications such as smart homes and smart cities. AliOS Things integrates cloud technology with IoT, making it possible to establish complex IoT networks by eliminating physical limitations of devices.

However, the large number of terminal devices involved in IoT challenges the regular way of maintaining cyber security. Additionally, the integration of cloud technology leaves IoT network vulnerable to cyber-attacks. With more and more cyber-attacks reported these years, security is of vital importance for IoT developers.

In order to overcome this tough task, uMesh has paid great attention to ensure the safe connection of devices and maintain the security and confidentiality of data in cloud. As the core component of AliOS Things, uMesh can be characterized as self-organized, self-repairing, and multi-hop. It is suitable for scenarios that need large-scale deployment and with high security demands, such as intelligent homes, smart lighting, and commercial buildings.

The main capabilities and features of uMesh include:

Internet Device ID, better known as ID², is a type of identification for IoT devices. Just like IP addresses, it is unique, and can't be changed or counterfeited. It's the key foundation in achieving interconnection among things.

The ID² platform is composed of Internet devices, ID² distribution center, ID² authentication center, and Internet service. Chips manufactures can request, get and program ID² through SDK. After programming, APIs can be called to confirm whether the chips have been successfully programed. Details about these processes can be viewed at the license application page (page in Chinese).

When programing ID², the corresponding private key will be programed into the chip, while the public key uploaded to ID² authentication center. The private key can later be used to decrypt the encrypted data sent by authentication center. In this case, channel authentication and key agreement in application layer can be achieved. The combination of ID² with various connecting protocols (such as MQTT and CoAP) further guarantees the safety of the whole IoT system. The framework of ID² platform is shown below. 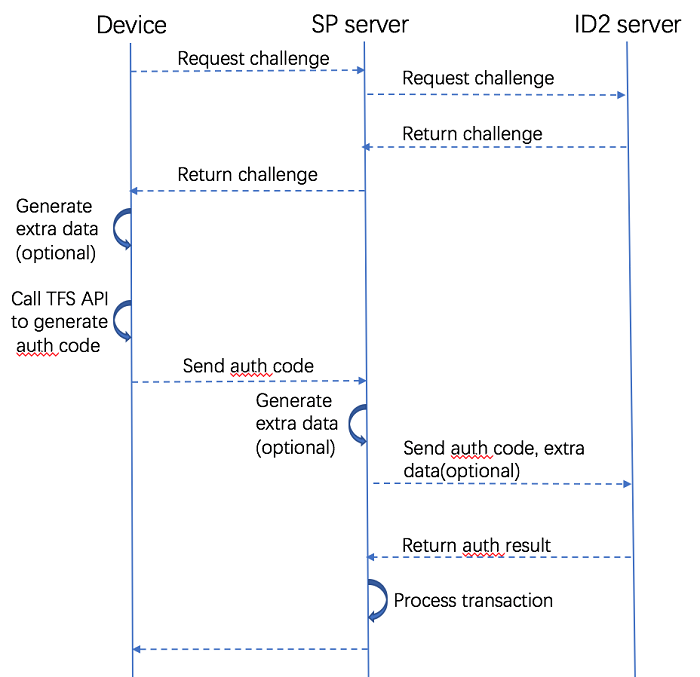 The flowchart can be summarized as follows:

In addition, for devices that have access to the Service Provider (SP) server, ID² ensures mutual authentication between devices and server. That is, on the one hand, SP server needs to decide whether or not the device with that identity information is allowed to access; on the other hand, the device needs to confirm whether the SP server has the legitimacy to provide certification service. Through this mutual authentication, devices that have legitimate identity information, but do not belong to SP server's services scope will be filtered out. Additionally, different vendors can define their specific way of access to SP server, though this part will be out of scope of this article.

SP server's use of POP SDK API in authentication process can be seen in these sample codes (links in Chinese): get challenge, requirement for authentication, and authentication and encryption. You can also refer to API declaration to learn about TFS API in devices. The path to TFS is AliOS-Things/security/tfs/lib.

Traditional AAA (Authentication, Authorization and Accounting) services require IT experts to create every certificate manually. In addition, the x.509 certificate will consume many preset flash resources and extra MCU resources when analyzing and authenticating ASN.1 (some may be larger than 1KBytes). Therefore, authentication based on certificates is not a best choice for resources-limited devices.

ID² is a light-weight platform based on identity. There is no need for IT experts to manually repeat the same process of deployment and configuration. Instead, you can just call the corresponding SDK to contact with ID² authentication center.

The authentication process of devices in uMesh is set according to challenge-response-based mode. It is compatible with Port-based Network Access Control (IEEE802.1x) and Extended Authentication Protocol (EAP). IEEE802.11 is used in data transmission. EAP also provides a basic protocol framework for further expansion and compatibility of other authentication measures, such as MD5, OTP and TLS.

The security authentication process in uMesh based on ID² platform can be illustrated as follows.

Raspberry Pi 3 (RPi 3), directly linked to the Access Point (AP), plays the role of leader in the framework. It generates a new uMesh and distributes 16 bits address for subsequently-joined devices, which is used for communication within this uMesh. Meanwhile, RPi 3 uses iptable to set up NAT to transmit the IP data packet between tun0 and eth0. This enables devices in uMesh to communicate with SP server through an external network, and thus completing the authentication process in ID² platform.

The security authentication process of devices in uMesh is described in the following flowchart. 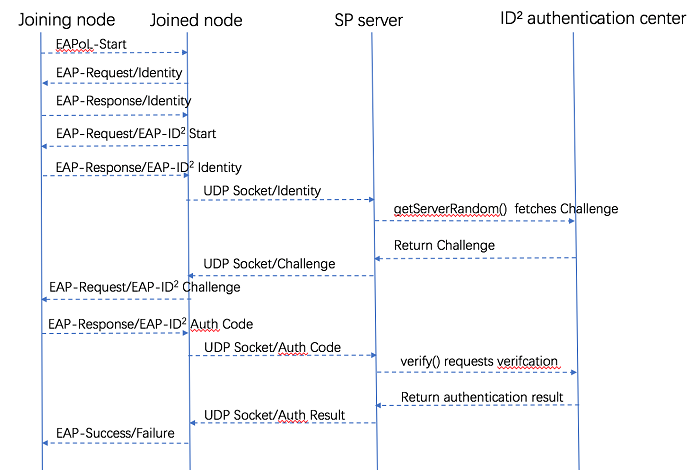 Extensible authentication protocol (EAP) defines the standard type of authentication (such as MD5, OTP, GTC, TLS) as well as some expanded types (type=254) to accommodate the existing process in different vendors. EAP-ID² is one of them used in uMesh based on ID² system. The detailed header format for extension type is as follows.

The authentication system in uMesh based on ID² platform has been verified in test environments. Furthermore, uMesh's compatibility with IEEE802.1x and EAP gives it more flexibility to meet different vendors' needs. AliOS, along with uMesh, provides a secure and reliable way for businesses to adopt IoT technologies.

More details about AliOS Things can be seen on the AliOS Things GitHub page and the Application Development Guide.

Alibaba Cloud Shares Its Latest Developments on Internet of Things