23,650 0
Cloud Enterprise Network (CEN) is an enterprise class network on Alibaba Cloud that enables organizations to connect their VPCs across regions.

Imagine your rapidly growing business needing to expand from a single region in the United States to three regions across the globe. And you need to achieve this within two weeks to be ahead of the competition. Is this possible?

For enterprise-level networks, you'll need high speed, low latency, low packet loss connections – VPN + internet is not an option. Here’s what you may face today. First, a bunch of dedicated lines (DL) need to be rented from cloud service providers or ISPs. Usually this step alone could take up to several months.

If there is no in-house networking expertise available, you may have to hire a few network architects or sign a contract with a reliable external party. Even with the expertise, international route configuration for each link could take a few days. To create a full-mesh global network, such as interconnecting 4 global nodes with 6 lines, you'll need to repeat the above process 6 times!

In reality, it’s highly possible that several DL segments instead of one DL connect two regions, given the complexity of cross-region network design. In the end, building such global enterprise network could take several months instead of two weeks.

What is Cloud Enterprise Network (CEN)?

Cloud Enterprise Network (CEN) is an enterprise class network on Alibaba Cloud that enables organizations to connect their VPCs and on premise networks across regions within a couple of minutes.

To better understand CEN, let's take a look at some of its key elements:

A CEN instance is the basic resource for creating and managing your global network. You can add network instances into the CEN, and purchase a bandwidth package that can be shared by the cross-regions links connecting two districts.

A district is a collection of Alibaba Cloud regions, and consists of one or more regions. Interconnection districts are two districts where the network resources to be connected are located. The table lists the districts and their respective regions.

CEN is centrally managed by the global CEN controller, which functions as the brain to manage the VPC and vBR resources added at region level. 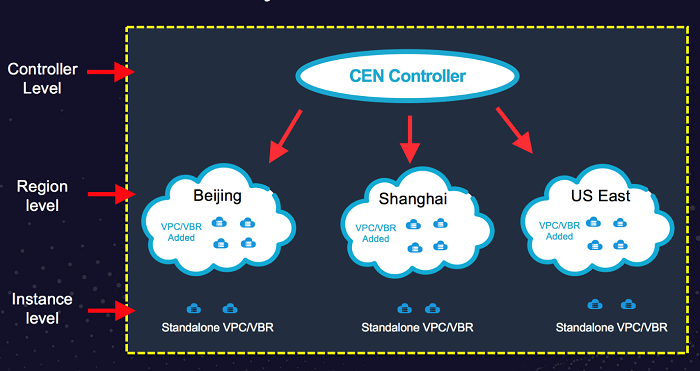 CEN radically simplifies network architecting. Personnel without deep knowledge on networking can build a global enterprise class network with confidence. It takes just 4 simple steps to establish the network. Global network construction cycle is shortened from several months to a couple of minutes.

CEN features high availability and network redundancy. There are at least four groups of independent redundant links between any two access points. Even if some of the links experience interruptions, CEN ensures service continuity without network jitter or packet loss.

Built upon Alibaba’s global backbone network, CEN is an existing full mesh network in the cloud ready for use. By adding network resources into CEN, users can establish an interconnected global network instantly. Traditionally network administrators need to build a corporate network from scratch – connect the 4 sites as in the example with 6 individual DLs and configure them one by one.

Another feature of CEN is dynamic route learning. As mentioned before, a cross-region link may consist of several DLs. As opposed to today’s manual configuration approach, CEN learns the BGP routes dynamically to achieve network convergence within seconds. 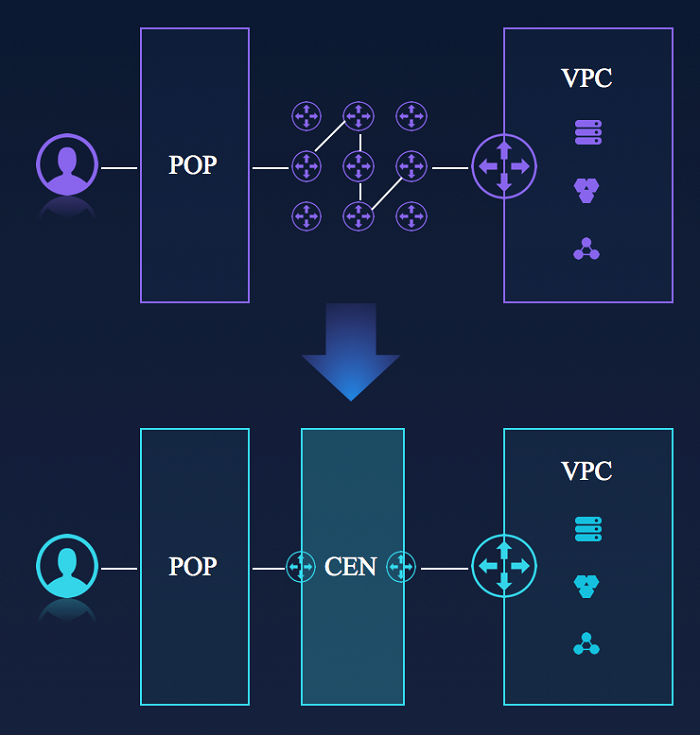 How Do I Purchase CEN?

Visit the official CEN product page to learn more or sign up for CEN today!

My 3-Month Experience with Alibaba Cloud

The Business Benefits of SDN and the Emerging SD-WAN Technology