Media Integration and Digital Transformation in the Post-Pandemic Era

409 0
This article explains the importance of digital, intelligent, and platform-based Internet operations in the post-pandemic media industry.

Data from the China Internet Network Information Center (CNNIC) shows that as of December 2020, the number of Internet users in China reached 989 million, and the Internet penetration rate reached 70.4%. The Internet allows people to access unlimited information from anywhere. In today's highly developed mobile Internet era, the behavior and social habits of consumers, including the trends of the media industry, have undergone tremendous changes. The outbreak of the COVID-19 pandemic fueled these changes further, accelerating the integration of various media with cutting-edge technology.

Trend iteration is rooted in technological innovation. Looking back at the history of communication, every reshaping of the news industry is a change to the media technology. In the all-media era, the development of media integration technology has been the general trend. For the media industry, keeping updated with the latest technological trends is key to staying competitive.

1. Media Changes during the Pandemic: Amplification of New Media

1.1 The Return of the Importance of TV Screens Towards the Next Generation of "Non-TV"

As a result of the home economy during the pandemic, television ratings on TV saw a mini-boom. This time saw TV stations enhancing positive coverage of pandemic prevention and control, reducing the variety of entertainment programs available during the Spring Festival, and even extending the length of news broadcasts to 50 minutes. We have seen a 60% year-on-year increase in viewing hours per capita for news programs. This also proves that the big TV screen still has an irreplaceable role in the field of public opinion.

The importance of TV is returning in the context of the pandemic outbreak, but notably, OTT viewing has gained more substantial growth compared to traditional TV channels, with daily per capita viewing hours far exceeding those of TV stations. This indicates that more users are watching programs on OTT.

Note: OTT stands for "Over the Top" and refers to Internet companies crossing over operators to develop various video and data service businesses based on the open Internet.

With the rapid development of OTT Internet TV, public demand and technological advances have driven TV to undergo fundamental changes, from a single audio and video reception display device to a fully interactive intelligent screen and from a single entertainment tool into a diversified content and service platform. Mobile phone small screen and TV large screen projection switching interaction have become an important trend. In addition to retaining the screen attributes, the kernel and extension of the screen have changed significantly.

1.2 Online Media Activity Has Rebounded Sharply in the Late Stage of the Pandemic, and Short Videos Have Performed Well

Among all news apps, apps developed by tech firms have been occupying the top 10 in the daily popularity ranking. For instance, the growth rate of Toutiao is far ahead among the common news apps in China, which can be mainly attributed to its technology and recommendation algorithm capability. From the early stage of the pandemic, home quarantine pushed almost all media to achieve active growth. Traditional TV media had the largest activity increase. After effectively controlling the pandemic domestically, social apps, such as Weibo and WeChat, entered a highly active period. Among them, video social and short video news became important carriers, and the daily activity scale of short video platforms overtook long video platforms. Short video news has become a powerful method that is faster, easier to understand, and more authentic. For example, livestreaming during the construction of the Huoshenshan and Leishenshan hospitals brought huge traffic to the CCTV News App and expanded the influence of mainstream online media.

It can be predicted that short video as a trend application will continue to promote media integration, and the application of new media will boost the development of short videos. During the pandemic, short video platforms, such as Douyin (TikTok) and Kuaishou, also began to run official news channels online. By expanding content expressions, enriching information production perspectives, and enriching interaction methods and services, short video platforms have become a brand new way for people to get information about the pandemic.

2.Thinking About the Media Industry Triggered by the Pandemic: Behind the Integration of Media is the Iteration of Digital Technology

Although the pandemic has increased the Internet traffic of mainstream media (compared to new Internet media and short video media), the daily activity and traffic of traditional mainstream media still need to be improved. Their content format and information breadth and depth should also be improved. During the pandemic, online media and social media have shown great power, not only in the dissemination of information but also in their public opinion influence, organization and mobilization capabilities, surpassing some traditional media. These are the directions that traditional media needs to think about and work hard on in the future.

In today's world where 5G is not yet widespread, there is still enough time for traditional media to actively embrace the changes and expand their network influence with a more youthful and more suitable communication method for public habits. 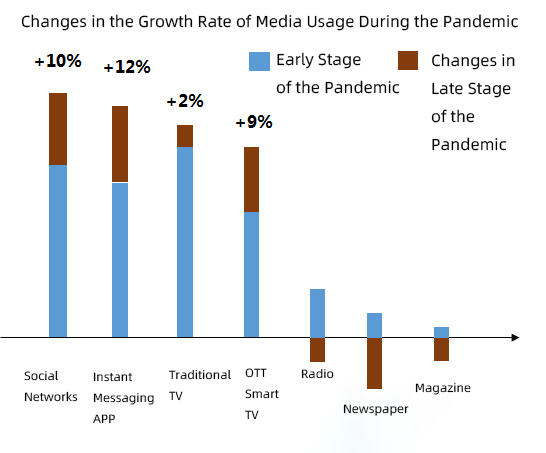 Behind the rise of new media is the continuous breakthrough of digital technology. According to data from the media industry during the pandemic, Toutiao, Douyin, and Xiguashipin (owned by ByteDance Group) have occupied the top rankings of news and video apps in terms of daily activity and traffic. ByteDance has long been a digital technology company that is fully on the cloud. The support of cloud computing, big data, artificial intelligence, established technology R&D, and operation teams are the reasons behind the company’s success. Behind the integration of media is the technological change and iteration, and the rise of new media cannot be separated from the push of digital technology.

The rising demand for quick responses and mobile interaction has accelerated the digital transformation of regional and community media. The pandemic will also change regional media. Last year, mainstream media were thinking about and exploring the reform of county-level integrated media. The pandemic made the public pay attention to the mainstream data and information and the changes in data and information in the communities around them, such as nucleic acid testing rate and vaccination rate. All these demands will accelerate the digital changes of regional and community media. The development focus of regional media will come more from technology, especially when the integration between regional media, mobile interaction, big data analytics, and other technologies is increasingly powerful. The development of digital technology will undoubtedly bring more three-dimensional and perfect communication to regional media.

3. The Development Direction of Media after the Pandemic: Mobilization, Socialization, Visualization, Intelligence, and Platform-Based

The pandemic has highlighted the importance of digital technology in the media industry. At this time, the market competitiveness advantages reflected by the technology accumulation are covered at one glance.

For example, the CCTV News App of China Central Television (CCTV) made a big splash during the pandemic, ranking among the top mainstream media in terms of the number of users and articles read. CCTV Headquarters has put forward a development plan of "Network first, then TV station." We expect the cloud, digital, and online development of the overall media industry to deepen after the pandemic, and the development of short videos will become a highlight. Public opinion response, emergency reporting, and news screening systems that rely on digital technology will become the standard of mainstream positions.

At the same time, the particularity of this pandemic highlights the importance of local, district, and county-level media. We can observe that many local media responded quickly, and emergency coverage was integrated into the regular operation. Although local media has limited influence, a greater coverage effect can be achieved through media linkage. During the pandemic, the public paid more attention to the development of the pandemic around the community and changes in material supply than usual. The county-level integrated media reform that our country promotes vigorously showed positive effects during that time.

For example, Hubei Radio and Television promoted province-wide media linkage through the Yangtze River cloud platform, produced rolling report topics, linked pandemic reports with media in each city, and reposted them simultaneously in the province's 120 cloud-based system clients to form social resonance. Changjiang Cloud also cooperated with Jinyun, Hunan Red Net, and other 22 media companies across China to jointly conduct special reports to demonstrate the fight against the pandemic. It is foreseeable that the subsequent reform of the district and county-level integrated media will continue to grow and activate the vitality of the district and county-level media industry. The actual effect of media communication is the indicator to measure media integration, and it is an important consideration for the investment of national capital resources. The previous method of extensive allocation of financial funds according to media integration projects will be unsustainable. The client activity and communication influence will become the key reference basis, which makes an insight into user needs, attention to user experience, and data-driven operation more important.

In the technical field, the importance of app clients and social communication is self-evident. This similar Internet new media platform has long been separated from simple channel overlap and has become a mapping of technology and resource thickness. Content depth, form, and platform operations will become equally important in the future. Platform operations are user operations and mass operations, which require resilient and agile digital technology to comprehensively improve efficiency and content delivery accuracy.

For example, the elastic expansion of cloud computing/video cloud can support the user experience of mobile clients and ensure that information and videos do not lag. The use of artificial intelligence technology can improve work efficiency and release more resources in content acquisition and auditing. Therefore, the IT technology department of the media industry will be closely aligned with the business department in the future, and its importance will be highlighted further.

The integration of traditional mainstream media and new media is a long-term process. Although it is difficult to surpass new Internet media in terms of user activity and network traffic in a short time, according to development trends and changes in public behavior patterns, the role of digital technology should be emphasized for a long time.

In addition to technological investments, traditional media systems, mechanisms, and even organizational forms and talent structures also need to actively explore new changes and learn from the new Internet media for their flexibility and agility. The most important thing is to understand, adapt, and master user preferences and user changes through technology gradually and enhance the user interaction experience. In the future, if media integration wants to go further, digital, intelligent, and platform-based Internet operations will become the top priority.

On the Analysis of Sharding