1,056 0
In this article, the author explains how to ensure message reliability in RocketMQ throughout the message transmission process.

When implementing and managing message queues, you may face some common challenges including: A necessary presupposition in distributed systems is that all network transmissions are unreliable. In this case, you can only implement reliable message transmission through delivery retry. Most commonly used message queues such as RocketMQ and RabbitMQ can only guarantee successful message transmission at least once instead of exactly once.

Messages may be lost due to the unreliable network of the distributed system. How does RocketMQ prevent message loss as much as possible? The analysis of the entire process from message generation to final consumption could answer this. We can divide the complete message procedure into the following three stages:

The following figure shows the core logic of message sending from Producer to Broker: 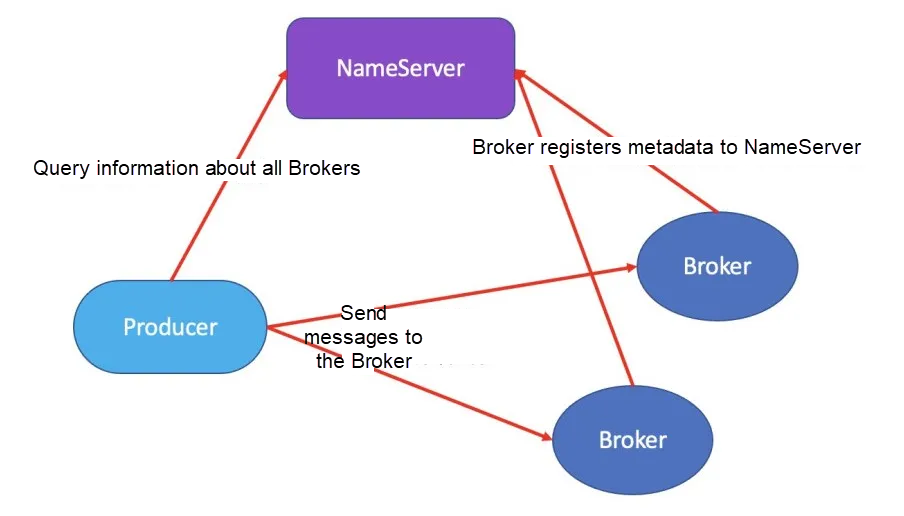 When the Producer sends a message in synchronous sending mode, it blocks the thread and waits until the server returns the sending result. To ensure message reliability and prevent message transmission failure, the Producer can send messages while blocking the thread and checking the status returned by the Broker synchronously to determine whether the messages are persistently successfully sent. If it times out or fails, two retries are attempted by default. RocketMQ selects the At Least Once message model. However, duplicate deliveries may occur since network transmission is unreliable. See the fourth section for the detailed retry strategy.

In asynchronous sending mode, the Producer sends messages to the callback interface implementation class. Calling such an interface does not block the thread, and the sending method is returned immediately. The callback task is executed in another thread, and the message, sending result is returned to the corresponding callback function. In a specific business implementation, you can judge whether to retry or not to ensure message reliability based on the sending results.

After the messages are sent in one-way sending mode, the Producer calls the producing interface and immediately returns it without returning the sending result. The business side cannot determine whether the messages are sent successfully according to the sending status. One-way sending is less reliable than the previous two methods. Therefore, we don't recommend it for the sake of message reliability.

In the RocketMQ architecture model, multiple message Brokers serve a certain topic. The messages under a topic are distributed on multiple Broker storage ends. The messages and Broker storage ends are in a many-to-many relationship. The Broker will report the metadata of the topic to which it provides storage service to the NameServer. The high-availability service offered by peer-to-peer NameServer nodes will maintain the mapping relation between the topic and the Broker. The many-to-many mapping relation serves as the basis for a message to be resent to multiple Brokers.

The following figure shows the message storage structure of RocketMQ: Currently, the RocketMQ storage model uses the local disk for storage. The data is written in the order of producer -> direct memory -> PageCache -> disk. Data is read from PageCache if it contains data. Otherwise, the data needs to be loaded from disk to PageCache first. The following figure shows the file storage mode on the Broker storage nodes: The RocketMQ storage side uses local disks to store CommitLog message data, which inevitably brings the issue of storage reliability. RocketMQ has always been working on improving data reliability to prevent message loss.

In the following scenarios, the RocketMQ storage side - or the Broker - faces the challenges in storage reliability:

4) The machine is out of power, but the power supply can be restored immediately

5) Machine startup failure (possibly caused by the damage to critical devices, such as the CPU, mainboard, and memory)

In general, you can prioritize either performance or reliability. For RocketMQ, two factors mainly affect the reliability of the Broker:

If you implement disk flushing and master-slave replication for all messages, it will undoubtedly reduce the performance. Otherwise, there may be a possibility of message loss. Generally, RocketMQ first writes messages to PageCache and then persists the messages to disk. Data can be flushed from PageCache to disk synchronously or asynchronously. The following figure shows the process of reading and writing messages:

The storage reliability of the stand-alone broker depends on the flushing policy of a single machine. For replication between master and slave, see master-slave mode in the next section.

When a message is written to the PageCache in the memory, the result of a successful write is immediately returned to the client. When messages in PageCache accumulate to a certain amount, trigger a write operation or time writing PageCache messages to disks. This mode features high throughput and performance. However, data on a PageCache may be lost and be absolutely secure.

RocketMQ operates CommitLog and ConsumeQueue files based on the file memory mapping mechanism. It loads all files during startup. So, the expired file deletion mechanism is introduced to avoid memory and disk waste, recycle disks, and avoid that the messages cannot be written due to insufficient disks. With this, you can maintain the disk usage at a certain level to ensure reliable storage of newly written messages.

By default, RockerMQ provides the At Least Once consumption semantics to ensure reliable message consumption.

Generally, the confirmation mechanism for message consumption is divided into two types:

The following figure shows the core logic of message consumption on the Consumer: After the Consumer pulls a message from RocketMQ, it should return a consumption success message to indicate that the business side normally completes the consumption. Therefore, consumption is completed only when CONSUME_SUCCESS is returned. If CONSUME_LATER is returned, messages are consumed again based on different messageDelayLevel values that range from seconds to hours. Retry the consumption after a maximum period of two hours. If the consumption fails after 16 tries, it will no longer be retried. The message will instead be sent to the dead-letter queue to guarantee message reliability.

RocketMQ does not immediately discard the messages unsuccessfully consumed, but sends them to the dead-letter queue with %DLQ% appended to the original queue name. For the message finally entering the dead-letter queue, it can be obtained through the relative API provided by RocketMQ, ensuring the reliability of message consumption.

Consumption backtracking refers to whether the successfully consumed messages or the messages with problematic consumption business logic need to be re-consumed. To support message backtracking, after the Broker delivers a success message to the Consumer, the message needs to be retained. Re-consumption is generally based on the chronological order. For example, if the Consumer system fails, the data from one hour ago needs to be re-consumed after recovery. The RocketMQ Broker provides a mechanism to roll back the consumption progress by the time, ensuring that a message can always be consumed as long as it is sent successfully and is not expired.

As such, RocketMQ has ensured message reliability while implementing a closed loop, preventing message loss to the maximum extent.