30,290 1
This article explores the use of deep neural networks in computer vision applications including image recognition, classification and video classification.

Even though deep neural networks feature incredible performance, their demands for computing power and storage pose a significant challenge to their deployment in actual application. Research shows that the parameters used in a neural network can be hugely redundant. Therefore, a lot of work is put into increasing accuracy while also decreasing the complexity of the network.

Once training is complete, some irrelevant neuron connections (can weight value balancing and sparse constraints in the loss algorithm), or filter all of them out, then execute several rounds of fine-tuning. In actual application, pruning the level of neuron connections will make the results sparse, difficult to cache, and difficult to access from memory. Sometimes, we need to design a cooperative operations database especially.

By comparison, filter-level pruning can get to run directly on the already present operation database, and the key to filter-level pruning is determining how to balance the importance of the filter. For example, we can use the sparsity of the results from convolution, the impact of the filter on the loss algorithm, or the impact of the convolution on the results of the next layer for balancing.

We can separate weight values into groups, and then use the median value in a group to replace the original weight, and run it through Huffman encoding. This can include scalar quantization or product quantization. However, if we only take the weights themselves into consideration, then the error deviation of the quantization process can get reduced. Subsequently, the error deviation of classification operations would get increased significantly. Therefore the optimization goal of Quantized CNN is to restructure to minimize the error deviation. Furthermore, we can use hash encoding and projected same hash bucket weights to share the same value.

Reduce the Scope of Data Values

Under the default circumstances, the data is composed of single precision floating points, taking up 32 bits. Researchers have discovered that using a half-precision floating point (16 bits) has nearly zero impact on performance. Google's TPU uses 8-bit integers to represent data. The final situation is that the range of values is either two or three values (0/1 or -1/0/1). Using only bits for operation can allow us to complete all kinds of computation quickly, however training a two or three value network is a vital issue.

The conventional method is to use two or three values for the feed-forward process and pass real numbers in the updating process. Furthermore, researchers believe that the expressive ability of two value operations is limited, so it uses an extra floating-point scaling binary convolution result to improve network representation.

Researchers have worked on creating a simplified network structure. For example,

Knowledge distillation training a small network to approach an extensive network. However, it is still unclear how correctly to approach a vast network.

There are two main types of commonly used hardware:

The classic method of fine-grained image classification is to first define different locations on the image, for example, the head, foot, or wings of a bird. Then we have to extract features from these locations, and finally, combine these features and use them to complete classification. This type of method features very high accuracy, but it requires a massive dataset and manual tagging of location information. One major trend in fine-grained classification is training without additional supervision information, instead of using only image notes. This method gets represented by the bilinear CNN method.

The result of bilinear confluence is exceptionally high-dimensional. This requires a significant amount of computing and storage resources, also significantly increased the number of parameters on the next fully-connected layer. Follow-up research has aimed to create a strategy for streamlining bilinear confluence, the results of which include the following:

Image captioning is the process of generating a one or two sentence description of an image. This is a cross-disciplinary task that involves both vision and natural language processing. The Attention Mechanism is a standard technique used by machine translators to capture distant dependencies, and can also get used for image captioning. In the decoder network, at each moment, aside from predicting the next word, we also need to output a two-dimensional attention image and use it for weighted convergence of deep convolution features. An additional benefit to using an Attention Mechanism is that the network can get visualized so that we can easily see which part of the image the network was looking at when it produced each word.

Previous Attention Mechanisms would produce a two-dimensional attention image for each predicted word (image(a)). However, for stop words like the, or, of, we do not need to use clues from the image. Instead, some words can get produced according to the context, completely independent of the image itself. This work expanded on LSTM and gave rise to the "visual sentry" mechanism which determines whether the current word should get predicted according to context or the image information (image(b)).

Given an image and a question related to that image, visual question answering aims to answer that question from a selection of candidate answers. In its essence, this is a classification task, and sometimes it uses recursive neural network decoding to produce the text answer. Visual question answering is also a cross-disciplinary task that involves both vision and natural language processing.

The concept is to use CNN to extract features from an image, RNN to extract text features from the text question, then combine the visual and textual features, and finally perform classification using the fully-connected later. The key to this task is figuring out how to connect these two types of features. Methods that directly combine these features transform them into a vector, or add or produce the visual and textual vector by adding or multiplying the elements. This method uses the outer product of visual feature vectors and textual feature vectors to capture the relationships between the features of these states on every dimension. To avoid explicitly computing the highly-dimensional result of bilinear confluence, we can apply the thought behind streamlined bilinear confluence found in fine-grained recognition to visual question answering. For example, MFB uses the concept behind low rate approximation as well as visual and textual attention mechanisms.

These methods provide many visualization methods to aid in understanding convolution and neural networks.

The First Filter in Direct Visualization

This method uses low-dimensional embedding on the fc7 and pool5 features of the image. For example, reducing them down to 2 dimensions allows them to be drawn on a 2-dimensional plane. Images with similar semantic information should yield similar results from t-SNE. The difference between this method and PCA is that t-SNE is a non-linear reduction method that preserves the distance between localities. We arrive at the following image which is the result of applying t-SNE to the original MNIST image. We can see that MNIST is a relatively simple dataset where differences between images of different classifications are obvious. 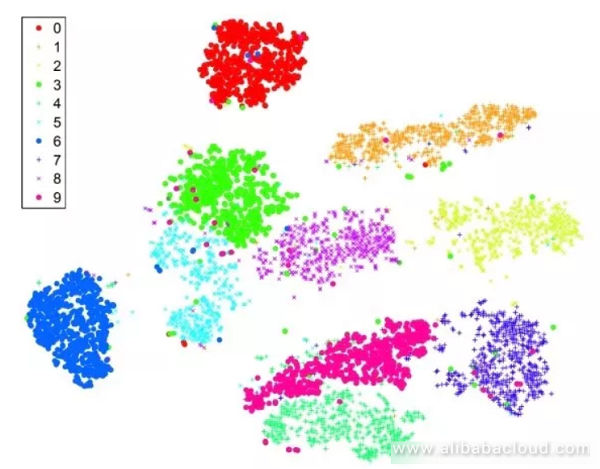 Draw different feature image responses for a specific input image. We can see that even though ImageNet does not have a category for human faces, the network will still learn to distinguish between this semantic information and capture future classifications.

To impelement this, select a specified neuron in the middle layer, then input multiple different images to the network to find the image region that causes the maximum response from the neuron. This allows us to observe which semantic feature the neuron corresponds to. The reason that we use "image regions" and not "the complete image" is that receptive field of a middle layer neuron is limited and cannot cover the entire image.

Input Saliency Map calculates the partial derivative produced by a specific neuron in reaction to a given input image. This represents the impact that different pixels in the picture have on the response of the neuron to that image and the changes to the reaction that are produced by changes to those pixels. Guided backdrop only back-propagates positive gradient values and only pays attention to positive influences on the neuron. This will create an even better visualization effect than standard back-propagation.

This method selects a specific neuron and then calculates the partial derivative produced by that neuron in reaction to the input image, then optimizes the image using gradient rise until convergence. Furthermore, we need some normalized items to bring the produced image closer to the natural model. Aside from optimizing the input image, we can also optimize the fc6 feature and create the required image.

In practical application, adversarial examples are significantly helpful in the fields of finance and security. Researchers have found that this is because that the image space is very highly-dimensional. We can only cover a small part of that space even with a vast amount of training data. If the input picture varies even a little bit from that different space, then it will be difficult for the network to reach a reasonable decision.

Very nice article!!! Do you want to know about Challenges in computer vision please check this article https://blog.skyl.ai/what-is-computer-vision/ i would love take some suggestion