March 29, 2018 – Kong Wen, an Alibaba Cloud expert in elastic computing products presented at the Shenzhen Computing Conference during on the Overall Analysis on TB-level IOPS. During the Elastic Computing Technology Session, he delivered a comprehensive analysis on the features and applicable scenarios of Enhanced Solid State Drives (ESSD), and the performance improvement it brought to the services.

Coping with Increasing IT Infrastructure Demands

Alibaba Cloud officially launched ESSD on January 9, 2018. Kong Wen explained that Alibaba Cloud launched ESSD mainly because the fast growth of services poses increasingly higher requirements on the basic IT infrastructure in an era of explosive data growth. The cloud disk features good flexibility, security, and reliability but there is still a gap between the cloud disk and the ephemeral disk of a physical machine in terms of the maximum performance and latency stability. Although featuring good performance and latency stability, ephemeral disk is hard to be comparable to the cloud disk in terms of reliability and elasticity due to limitation in physical machine hardware. Many customers asked whether a product can boast the elasticity and security features of the cloud disk while almost reaching the performance of the ephemeral disk.

To this end, Alibaba Cloud launched ESSD, an ultra-high performance cloud disk enjoying 99.9999999% availability of the cloud disk while realizing the performance comparable to the SSD ephemeral disk, based on the new generation of distributed block storage architecture, 25GE network and RDMA technology application. In addition, ESSD supports automatic snapshot, data encryption, and other advanced storage services, and satisfies the maximum performance requirements for the OLTP database, NoSQL database, and Elasticsearch log analysis. Therefore, it becomes the optimal solution as a block storage product for enterprise-level core service data of the customers. 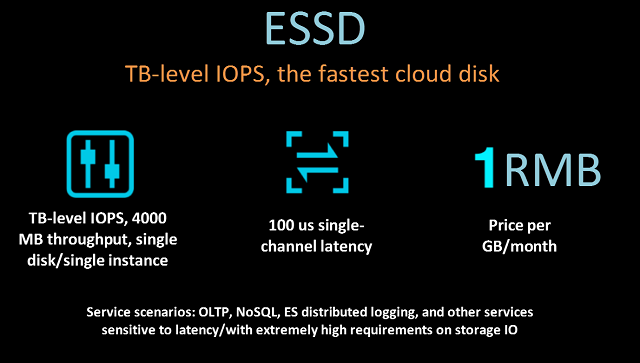 Compared with SSD, ESSD has the following performance improvements:

When it comes to the reason why ESSD can achieve such a high performance, Kong Wen explained that the technicians are instinctively seeking for new technology peak, so the block storage team of Alibaba Cloud has been committed to providing the cloud users with higher, faster, and stronger storage performance and allowing them to enjoy the benefits from technology development.

The architecture of ESSD is upgraded after nearly one year's large-scale deployment and development. All components of the IO link are upgraded, from VM frontend drive and QEMU/KVM IO virtualization to backend Pangu distributed storage, from RDMA network to user mode TCP stack, and so on. ESSD can be considered as a super product in the cloud computing storage field as the 4KB end-to-end random write performance (IOPS) of a VM hits 1 TB and the 4KB single-channel latency is limited to 100 us. This means that in the OLTP service scenario, Alibaba Cloud ESSD can bear more IO accesses within the same time period compared with the cloud disks of other vendors, which greatly promotes the service access ability, especially suitable for Internet finance, e-commerce, O2O, and core online business of large enterprises and other industries customers.

According to the test conducted in an actual service scenario (taking MySQL and PostgreSQL as examples), TPS performance can be improved by 3-4 times when ESSD is used. 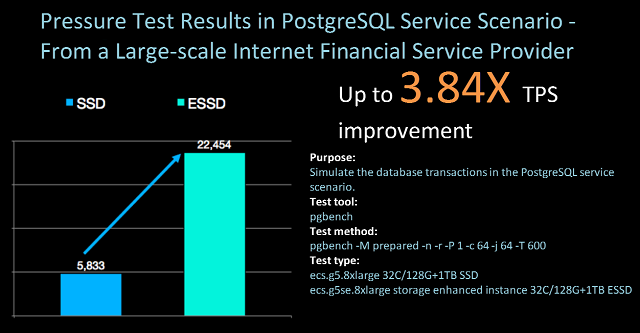 In the end, Kong Wen also said that the Alibaba Cloud ESSD is priced the same as SSD even it has an performance improvement by 50 times, which fully reflects the benefits from scale effect of cloud computing and Alibaba Cloud aims to provide the end users with higher technical capabilities. 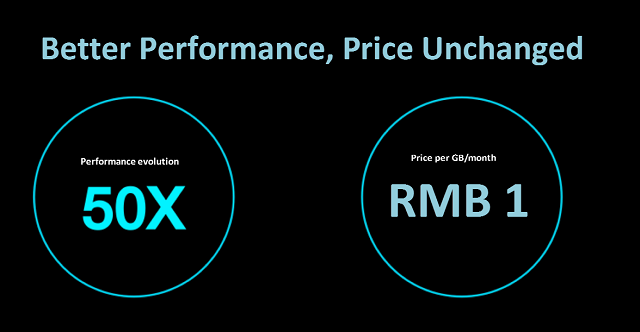 The test clusters of Alibaba Cloud ESSD have been launched in China North 2 (Beijing) and China East 2 (Shanghai) regions.