Hangzhou, China, September 23, 2019 – Alibaba Cloud, the data intelligence backbone of Alibaba Group, today announced the launch of a 400G DR4 optical transceiver based on Silicon-Photonic (SiPh) technology to support its next-generation data center network. The new transceiver will be deployed in Alibaba Cloud’s global data centers starting in 2020 and will increase the network speed by four times compared with current 100G optical transceivers. This important development will also lay a solid foundation for opto-electronic co-packaging technology in the future. Alibaba Cloud will be conducting a live demo of the new transceiver at the upcoming Apsara Conference on September 25-27, 2019.

This is another milestone in the field of optical interconnection following Alibaba Cloud's full deployment of 40G and 100G optical transceivers in 2016 and 2017. The rapid growth of cloud computing and big data applications has meant that data centers have to handle a doubling in traffic every one to two years. To meet the demand for high-bandwidth data transmission while maintaining the same cost, power consumption and size of data center, it is critical to increase the optical transceiver speeds with innovation in the field of optical interconnect technologies.

Silicon-Photonic is a key technology to address this challenge. It significantly reduces the physical size of transceivers while simplifying the design and production by integrating a large number of optical components onto a single silicon photonic chip. The technology utilizes existing CMOS manufacturing processes to achieve wafer-scale testing and packaging, thereby significantly reducing the production cost of photonic chips. An additional benefit is the reduction in signal impairments within transceivers that lowers the signal-processing power consumption. Since Silicon-Photonics uses the same CMOS processes and manufacturing technologies, it is more suitable for opto-electronic co-packaging, which may ultimately solve the existing challenge of the electrical chip I/O bandwidth bottleneck.

Alibaba Cloud has been investing in SiPh technology in recent years. Through in-depth cooperation and joint technology development with Elenion Technologies and Hisense Broadband, Alibaba Cloud is involved in the entire production supply chain, from SiPh chip design, packaging and testing to the SiPh-based optical transceiver design, packaging, assembly and testing. The successful development of the SiPh 400G DR4 optical transceiver is the result of Alibaba's long-term investment in these technologies. Through further cooperation within the industry, it is expected that the speeds of optical transceivers will reach 1T or higher in the next five years. 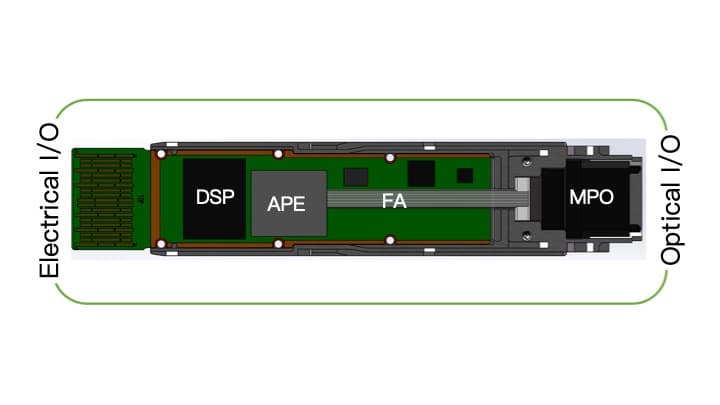 Figure 2 shows the internal structure diagram of the optical transceiver. The transceiver is composed of three parts: a digital signal processing (DSP) chip, an Alibaba Photonics Engine (APE), an optical fiber array (FA) with an MPO-type connector. The APE package integrates virtually all of the opto-electronic components, greatly simplifying the design and production of the transceiver. The DR4 optical transceiver will be used to connect switches in the Alibaba data center network up to a range of 1km apart.

Established in 2009, Alibaba Cloud (www.alibabacloud.com), the data intelligence backbone of Alibaba Group, is among the world’s top three IaaS providers, according to Gartner. It is also the largest provider of public cloud services in China, according to IDC. Alibaba Cloud provides a comprehensive suite of cloud computing services to businesses worldwide, including merchants doing business on Alibaba Group marketplaces, start-ups, corporations and public services. Alibaba Cloud is the official Cloud Services Partner of the International Olympic Committee.

A Free Trial That Lets You Build Big!