Anti-DDoS Origin can mitigate DDoS attacks for Elastic Compute Service (ECS), Classic Load Balancer (CLB), Web Application Firewall (WAF), and Elastic IP Address (EIP). Anti-DDoS Origin is integrated with the preceding services. You can use Anti-DDoS Origin without the need to change IP addresses. In addition, no limits of Layer 4 ports or Layer 7 domain names are imposed on Anti-DDoS Origin.

By default, Anti-DDoS Origin (Basic Edition) is enabled for CLB free of charge. Anti-DDoS Origin (Basic Edition) provides a maximum bandwidth capacity of 5 Gbit/s. All data from the Internet is filtered by Alibaba Cloud Security before the data is transferred to CLB. Alibaba Cloud Security filters out and mitigates DDoS attacks such as SYN flood, UDP flood, ACK flood, ICMP flood, and DNS flood attacks. 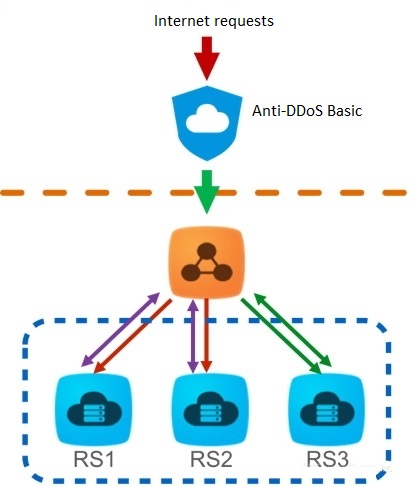 Anti-DDoS Origin (Basic Edition) sets thresholds for scrubbing and blackholing based on the bandwidth of Internet-facing CLB instances. When the inbound traffic reaches the threshold, scrubbing or blackholing is triggered:

Thresholds are calculated based on the following rules:

You can perform the following steps to calculate the thresholds.

Note You must use your Alibaba Cloud account to grant the read-only permissions to a RAM user.