SAP® MaxDB™ is the database management system developed and supported by SAP SE.SAP MaxDB is available on Microsoft Windows, Linux and UNIX and for the most prominent hardware platforms as well as Public Cloud. For more details about SAP MaxDB, please kindly refer to SAP official website: http://maxdb.sap.com

This deployment guide describes how to plan and deploy the SAP MaxDB database system on Alibaba Cloud ECS, including how to configure the ECS instances, block storage, network, and SUSE Linux Enterprise Server (SLES) operating system. This guide includes the best practices from Alibaba Cloud and SAP.

This deployment guide describes an ECS General Purpose Instance Family (sn2ne) certified for SAP MaxDB, which runs on the Intel Broadwell architecture and belongs to one of ECS enterprise instance type families. The SSD cloud disk and Ultra cloud disk can be used to host data volumes and logs in the SAP MaxDB database. The currently supported ECS instance types are listed in the table below, for more information, please kindly refer to SAP Note: 2552731 - SAP Applications on Alibaba Cloud: Supported Products and IaaS VM Types

For details about the ECS memory instance type family se1, go to https://www.alibabacloud.com/help/doc-detail/25378.htm#se1

This section describes how to deploy a SAP MaxDB on Alibaba Cloud.

If you do not have an Alibaba cloud account yet, you can apply for one according to the following process:

For more information, please kindly refer to Regions and Zones.

In general cases, it is recommended that you select a data center closest to your end users to further speed up user access. Alibaba Cloud’s data centers in Chinese mainland are similar to each other in terms of infrastructure, BGP network quality, service quality, and ECS operation and configuration. Domestic BGP networks ensure fast access to regions across China. 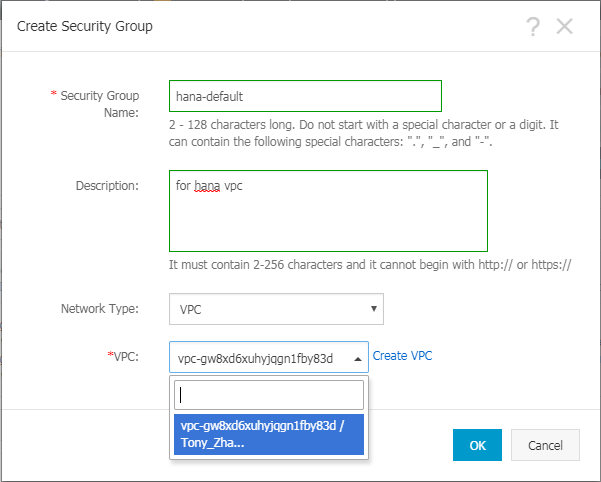 During SAP MaxDB deployment, a VPC is used. You only need to set the rules in the outbound and inbound directions, without specifying the public network or VPC. The security group rules are blank by default. When creating an ECS instance, make sure that the selected security group contains port 22 (Linux) or 3389 (Windows). Otherwise, you cannot remotely log on to the ECS instance.

For details about specific ports that SAP needs to access and the related security group rules, refer to SAP official documentation.

Create a bastion host with one vCPU and 2 GB memory and without additional storage in the same VPC of the same zone by following the preceding steps.