Linux has various tools for viewing network traffic, such as sar, iftop, and nethogs. They can analyze the flow information in the system from different latitudes, which is briefly introduced in this article.

Take note of the following items:

sar can analyze the sending and sending of data packets and error messages from the network interface level. The following common commands are used to monitor network traffic using sar.

Run the following command to use sar to count the activity status of the network interface every 1 second and display it five times in a row. 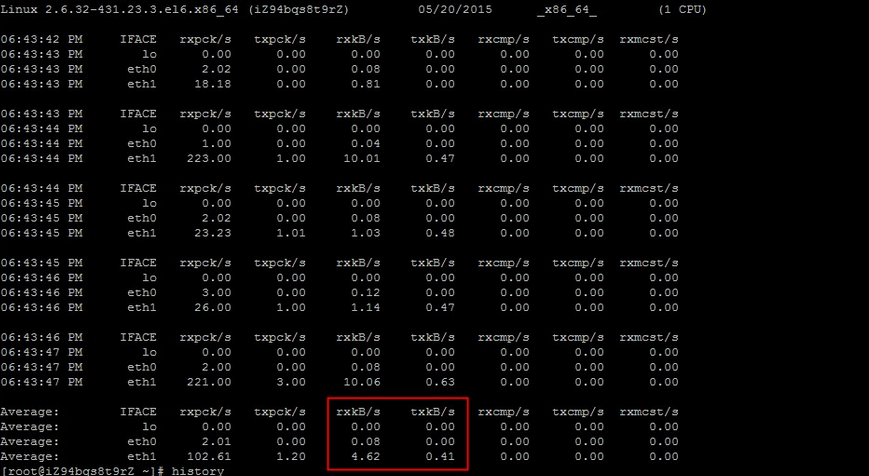 Description of the main fields of the display result

Description of the main fields of the display result

Note: The traffic unit of iftop is Mb, where b is bit, not byte. The unit displayed by ifstat is B in KB, which is byte. 1byte equals 8 bits.

After entering the iftop interface, you can adjust the display results by pressing the corresponding letter shortcut button.

Nethogs is an open-source network traffic monitoring tool that can be used to display the bandwidth usage of each process. This allows you to more intuitively locate the source of abnormal traffic. Nethogs supports IPv4 and IPv6 protocols, and supports local network interface controller and PPP connections. For more information about how to install the Nethogs tool, see its official help documentation. After the installation is completed, directly enter the nethogs startup tool. If you do not have any parameters, nethogs monitors eth0 by default. You can use commands such as ifconfig to verify which network interface (eth1, eth0) corresponds to the public network interface controller.

Description of the display result

On the nethogs monitoring page, you can sort by s in the Sent column, by r in the Received column, and by m in different statistical units, such as kb/s, kb, b, and mb. The following table describes the monitoring interface information.