Traditional long-running virtual machines and managed container services often use a billing interval that starts when an instance is started and ends when the instance is stopped. You are charged even when no request is executed in this interval. Function Compute charges you at a billing granularity of one millisecond. You are charged only when requests are sent. The instances are frozen in time periods in which no requests are sent. This way, the unnecessary costs generated by idle instances that use the fully event-driven billing models can be reduced. However, the freeze mechanism breaks down the hypotheses of long-running processes in traditional architectures and makes it difficult to migrate applications. Function Compute runs in a special environment. The system cannot track and report data as expected in scenarios where there is no cold start, such as when the open source distributed Tracing Analysis libraries or third-party application performance management (APM) solutions are used.

The following pain points hinder the smooth migration of traditional applications to a serverless architecture: 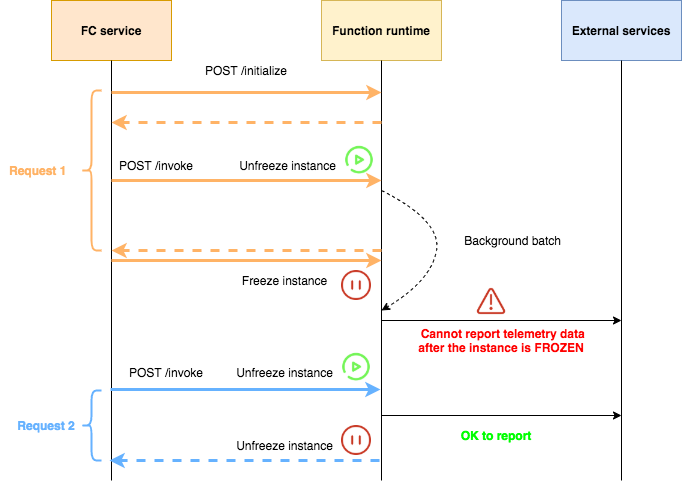 Function Compute provides the runtime extension feature to address the preceding pain points. The feature extends the existing programming model for HTTP servers by adding the PreFreeze webhook and the PreStop webhook to the existing HTTP server model. Extension developers can use an HTTP handler to monitor the lifecycle events of function instances.

The billing method for PreFreeze or PreStop calls is the same as that for InvokeFunction calls. You are not charged for the number of requests sent to the HTTP hooks. The extensions are also applicable to scenarios in which multiple concurrent requests are executed on a single instance. Assume that multiple invocation requests are concurrently executed on the same instance. After all the requests are executed, the PreFreeze hook is called before the instance is frozen. In the example shown in the following figure, the specification of the function is 1 GB. Assume that the period from t1 when PreFreeze starts to t6 when Request 2 is completed is 1s. The execution time of the instance is calculated based on the following formula: t6 - t1. The consumed resource is calculated based on the following formula: 1s × 1 GB = 1 CU.

The following sample code provides an example on how to use Serverless Devs to configure the PreFreeze hook and the PreStop hook:

To disable an extension function, leave the Handler parameter of the extension function empty. Otherwise, the function is not updated by default. For example, if you want to turn off the PreFreeze hook, perform the update and deployment operations based on the following configuration. In this case, the timeout parameter of the PreFreeze hook is invalid.

Use SDKs to configure the PreFreeze hook and the PreStop hook

You can use SDKs to deploy and update extension functions. The following code provides an example on how to use the SDK for Go to configure PreStop and PreFreeze hooks when you create a function:

After you configure an instance lifecycle hook and execute the code of the hook, you can query the logs of the hook.